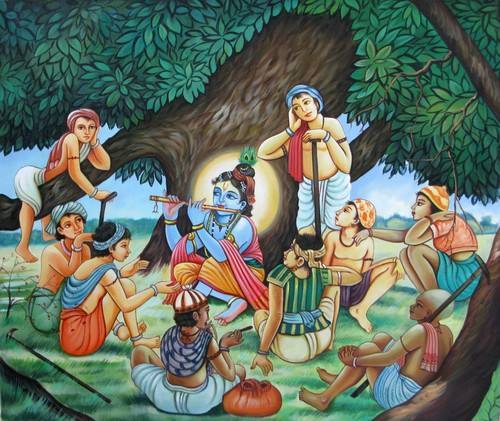 Krishna’s Fascination.
By Sacinandana Swami: Krishna is fascinated with the land and people of Vrindavan.
The Bhagavatam says (10.1.28): “The city and district of Mathura,” Vrindavan is part of that, “are very intimately connected with Krishna, for Lord Krishna lives there eternally.”Nityam sannihito harihi – He is there eternally.

“It is there,” writes Vishvanath Chakravarti Thakur, “that Krishna appears and becomes visible to the people of the world. And He stays there forever.” He does not descend from Vaikuntha, one of His many spiritual planets. No, He is right there as Krishna in Vrindavan.

In His early childhood, Krishna crawled in the mud near the house of Nanda Baba. He was so fascinated with Vrindavan that He and Balarama didn’t mind winding through the earth wet from cow urine like two little snakes. Later Krishna left the village and went further into the forest, and even though He and His friends were decorated by their mothers in the morning, they later put these costly clothes aside and dressed in forest attire. They gathered peacock feathers, mango twigs and leaves and decorated their bodies with them. Then they painted each other with soft minerals. It must have looked quite colorful – yellow, red, green, blue… and then they played, played and played.

But of all the people in Vrindavan, of everything the Vrindavan forest offers to Krishna, He is especially fascinated by Shrimati Radharani.

Krishna Himself says: “I have become a cowherd in the forest and now I wander about with my cows simply to see you, oh Radha.”

The land of Vrindavan inspires everyone who goes there with a strong impetus of bhakti (love) to go to Radha and Krishna, to go back home, back to Godhead.

During your life, read Vrindavan related things in the Bhagavatam and you will develop an attachment to what is on Krishna’s mind and in this way come closer to Him.