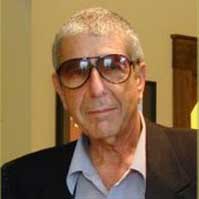 Leonard Cohen attended the festivities of the Rathayatra Festival in Montreal. World-class Canadian writer, artist, philosopher, poet, singer, songwriter, arranger, composer, producer and film maker Cohen has special resonance for many devotees. Mr. Cohen came to prominence during the Sixties when he, along with such greats as Bob Dylan and George Harrison, became the voice of a generation in search of spiritual direction. While in the eyes of the literati he is often seen as either a mystic minstrel and ladies’ man, for a surprising number of devotees Mr. Cohen has come to exemplify the dark brooding plight of the conditioned soul in search of the Truth. On the occasion of this year’s Rathayatra festival in Montreal however, this tender and gentle man of considerable fame and influence seemed content and at ease as he wandered through the various exhibits and activities organized in the framework of the Festival of India. Later, he sat discreetly with friends on the grass at some distance from the tent where Lord Jagannatha, Balarama and Lady Subhadra were being worshiped.

In person, Mr. Cohen proved to be a modest, unassuming man, unimpressed with his own fame, and a respectful listener. In conversation he proved to have a sharp inquisitive mind. After the usual introductions, Mr. Cohen seemed eager to state with evident pride that he had met His Divine Grace A.C. Bhaktivedanta Svami Srila Prabhupada in 1967, in New York’s lower East Side (a search of the Vedabase Folio yielded no record of this encounter and one cannot help but wonder what transpired at the time). He further said he has been practicing Zen Buddhism for the past thirty years and that he often goes to Mumbai, to hear from a certain advaitist guru of some reputation. He also seemed proud to say that he also regularly reads Bhagavad-gita. By good fortune, a devotee timely and discreetly came to offer him a copy of Srila Prabhupada’s original Bhagavad-Gita As It Is. He accepted the book with respect, inspected it briefly and showed it to the man and woman who accompanied him. Surprisingly, the gentleman friend said that the cover illustration of Bhagavad-gita As It Is has been gracing his refrigerator door for more than twenty years. He promised to dig out his copy of the book from his library shelves and read it.

Mr. Cohen expressed appreciation for the work that ISKCON is doing for the people in general by the distribution of song, music and food. He seemed particularly impressed that a new generation of young devotees seemed ready and enthusiastic to take to Krsna consciousness seriously. He inquired about how the movement had fared since Srila Prabhupada’s departure. When told that His Divine Grace had entrusted his movement to an oligarchy (the GBC) rather than to an individual, he asked if that had proved successful. He seemed to empathize when told that the results had been mixed. He seemed pleasantly surprised to learn that the Krsna consciousness movement is more than a charismatic phenomenon and represents the modern expression of the timeless religion of man beyond all forms of sectarianism.

There ensued some discussion on the difficulties of spiritual advancement in these troubled times and the personal obstacles each of us has to overcome as we reach for the Absolute Truth. Mr. Cohen did not seem to know that devotees consider that finding out who is the Absolute Truth or God constitutes only the first step of the spiritual journey. For a devotee of Krsna the real spiritual struggle begins as one tries to attract to himself the mercy of the Supreme Lord by rendering service to Him. Although the concept of bhakti-yoga was well outside his impersonal understanding of the Truth, he very respectfully listened to all that was said.

When asked if he was still writing, Mr. Cohen remained evasive. He did not try to promote his recent book.1

Only small-minded men flaunt good fortune; great men are often humbled by it. Fame is like sand in the hand. Our Krsna consciousness philosophy recognizes that most men, including the highly elevated spiritualists, fall prey to prathista, lobho and puja (fame, honor and followers). It was refreshing to talk to someone who having attained these coveted riches, is able to understand their will-of-the-wisp nature.

There is no harm for devotees to respect this extraordinary man whose music and writing has touched the heart and soul of so many. In the best tradition of the minstrels, Mr. Cohen carries on his frail shoulders the hopes and aspirations of the down-trodden. Legions of his fans cry out in unison with him: “Like a bird on a wire, Like a drunk in a midnight choir, Like a still-born child, I have tried… and I have tried.” May all of them some day be blessed by the mercy of Lord Caitanya Mahaprabhu and come to understand the wonderful magic and divine nature of the maha-mantra:

In his search for the truth, Leonard Cohen is not only challenged by good fortune, the lethal poisons of Buddhism and Impersonalism have also bitten him. However, this man’s life has been dedicated to the true human for the truth. Srila Prabhupada is glorified as gaura-vani-pracarine, nirvisesa-sunyavadi-pascatya-desa-tarine, “You are kindly preaching the message of Lord Caitanyadeva and delivering the Western countries, which are filled with impersonalism and voidism.” We pray at his lotus feet that he might extend his mercy to this soul. His Divine Grace once said: “Try to understand the science of God philosophically, intelligently, logically. There is no question of dogma, everything is nicely explained in Bhagavad-Gita As It Is… Krishna is not very difficult to understand. It is an easy subject matter. But to understand one must be sincere. That is the only qualification required.” (Lecture, 01.08.69, Los Angeles) Through his relentless and sometimes brutally honest pursuit of the truth, Mr. Cohen has imbibed great lessons in humility, respect for others. May Lord Nityananda Prabhu see fit to extend his unlimited mercy to this bruised soul! As Srila Bhaktivinoda Thakura writes in Gitavali, “O brother, needlessly under the control of illusion you suffer and are carried away by her waves, sometimes floating and sometimes sinking. If you have faith that the soul is the eternal servant of Krsna, then there will be no more misery. And when you chant Hare Krsna your body will shiver in ecstasy and your eyes will shed tears in love of God.”

1. After a ten-year hiatus Leonard Cohen recently caused a stir amongst his many fans with a book entitled, The Book of Longing.