Light Of Hope In The Darkness Of Sorrow 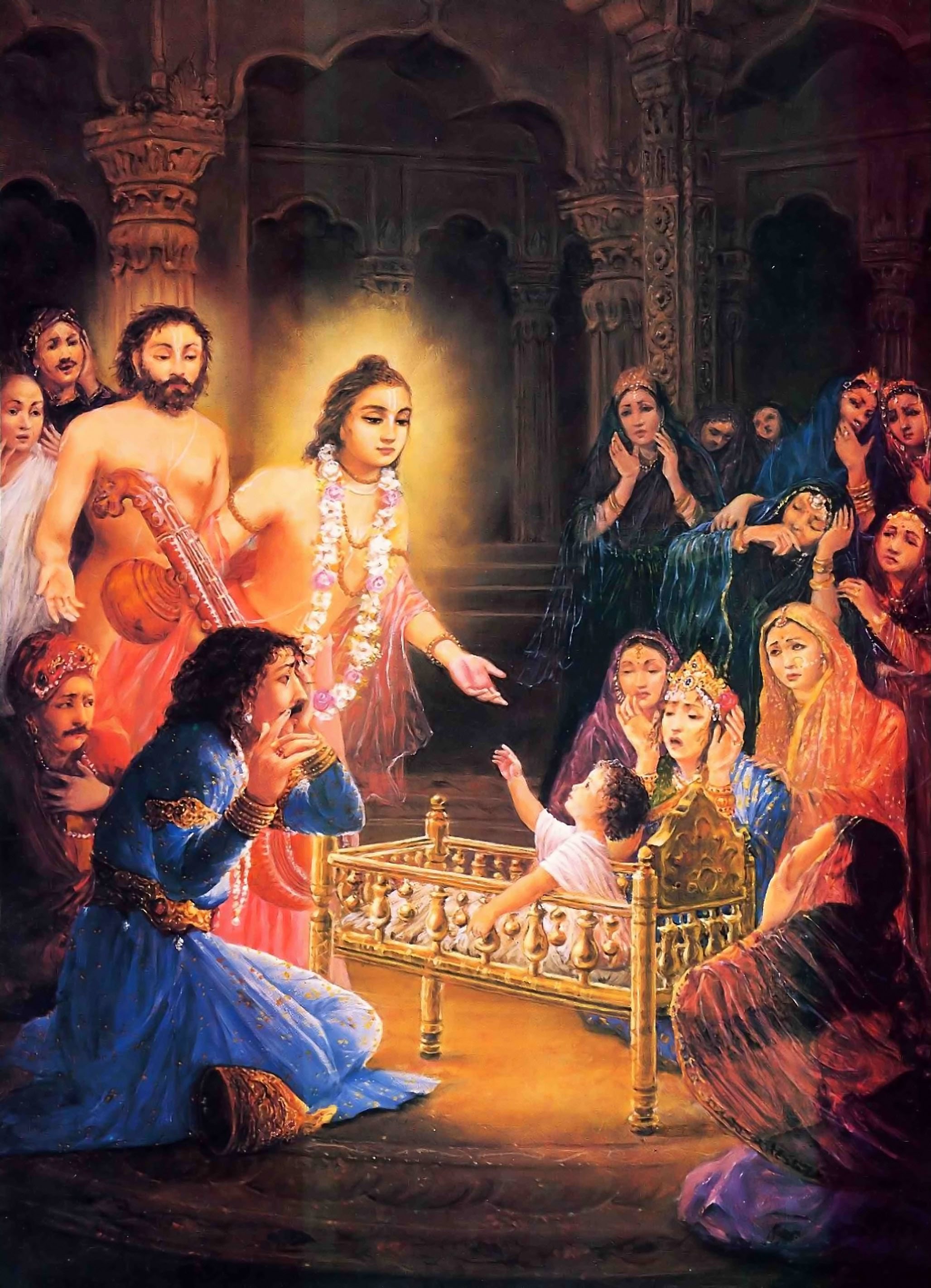 “In the insurmountable darkness of sorrow in this world, the only light of hope is the association of pure devotees and their instructions on devotional service. “

Perfect happiness in this world is just a dream thing

Once there lived a king named Citraketu in the province of Surasena. Owing to his piety and righteousness, his kingdom flourished. There was one problem though. The king had no issue. Although he married one bride after another in order to have progeny, nonetheless all of them turned out to be barren.

All the conditioned souls of this world tacitly harbor a utopian desire of obtaining perfect happiness. But this world is full of mixed happiness and misery. So the long cherished and long sought after perfect happiness is simply mirage or dream, reality of which can be experienced only in the spiritual world. Here we see that although the king had great opulence, beautiful queens, vast military power, several ministers and soldiers and so on, he was still hopeless and sorrowful.

During this time of despondency, sage Angira, by his own sweet will, visited Citraketu and inquired about his welfare. He said, “I can observe that your mind is not pleased. What is the reason?

Mind runs after the unobtainable

This is the nature of our mind and the nature of this world. No matter how much we possess, the mind clings on to what is unobtainable and remains dissatisfied. However, by revealing our mind to a trusted superior, there is solace and reassurance in the situations of confusions and chaos.Sage Angira mercifully performed a sacrifice and blessed Citraketu and his first wife Krtadyuti to have a son. He warns, however, that the son born will be the cause of happiness in the beginning and lamentation at the end. Saying nothing further, Angira leaves.

Citraketu was extremely delighted having obtained a son after a long time. His attachment to the son and Krtadyuti increased so much that he neglected his other wives.This world is no peaceful place. When God is not kept in the center of our lives, we create many ripples by keeping ourselves in the center, and the ripples clash with each other leading to turbulence.The wives of Citraketu who were without issue became envious of their co-wife Krtadyuti as she became the king’s favorite attracting all his attention to herself. They all devised an evil plan and administered poison to the child. The child died, and Krtadyuti cried in great lamentation.

Do not blame unseen God for unforeseen karma

Krtadyuti in her pain blamed God, “Oh, providence,you are so childish. You are acting against your own laws, causing the death of a child before his father.”This is how conditioned soul condemns the creator when he meets reversals and upheavals. She continued: “If you say, everything is controlled by karma, then there is no need of God. If you cut the bonds of affection that you only have created, through your arrangement of law of karma, then no one will raise children with affection.”Srila Prabhupada writes, “The subtle laws of karma,which are controlled by the Supreme, cannot be understood by ordinary conditioned souls. Therefore Krsna says that one who can understand Him and how He is acting, controlling everything by subtle laws, immediately becomes freed by His grace. That is the statement of Brahma-samhita (karmani nirdahatikintu ca bhakti-bhajam [Bs. 5.54]). One should take to devotional service without reservations and surrender everything to the supreme will of the Lord. That will make one happy in this life and the next.” (6.14.55 P)
The conditioned soul who does not understand this,tries to further his selfish plans and meets reverses inevitably and thus laments.

King Citraketu began crying loudly and lied down by the dead body of his child as if he were dead. At that moment Angira muni arrived there along with Narada muni. When one is in difficulty, he becomes helpless.If he is receptive to an advice of a devotee he can takes helter of Krsna in utter helplessness and complete dependence. Here we see an example of transformation of a pious distressed king into a pure devotee only due to the intervention of pure devotees like Narada and Angira.

Step I – Understand the impermanence of life

As long as one searches happiness in matter, one gets disappointed. The relationships of this world are transient and based on bodily conception. When one takes them to be permanent, one ends up in lamentation. Narada muni consoles Citraketu by saying: “What is your relationship with this dead body? Did it exist before? Will it continue in future? Sand particles sometimes come together and sometimes are separated due to forces of waves. Similarly, living entities come together and are separated.”

“When seeds are sown in the ground, they sometimes grow into plants and sometimes do not. Sometimes the ground is not fertile, and the sowing of seeds is unproductive. Similarly, sometimes a prospective father can beget a child, but sometimes conception does not take place. Therefore one should not lament over the artificial relationship of parenthood, which is ultimately controlled by the Supreme Lord.” (6.15.4)

Thus there is nothing to lament for the things that you cannot do anything about. Hearing these enlightening words, Citraketu fell at the feet of the sages. Angira told him that he could have given him that knowledge earlier also but he was not ready due to being absorbed in material things.

Step II – Take to the permanent life in Krsna consciousness

Realization of one’s relationship with Krsna ends one’s miserable material life and opens the door of a blissful eternal life. Narada muni instructed Citraketu to attentively receive a mantra that will make him see the Supreme Lord Sankarsana face to face.

“My dear King, in former days Lord Siva and other demigods took shelter of the lotus feet of Sankarsana. Thus they immediately got free from the illusion of duality and achieved unequaled and unsurpassed glories in spiritual life. You will very soon attain that very same position.” (6.15.28)

Hear it straight from the horse’s mouth

Narada muni then by his mystic potency brings the dead son back to life just to convince Citraketu. The boy spoke, “By my karma I change body. In which life were you my father and mother? Living entity is actually a son of Supreme Lord. Just as commodities and gold coins pass among many people, the jiva wanders into various wombs with various fathers and mothers. The soul wandering through material bodies, be it human body, animal body or tree body or demigod body gets a father and a mother. It is not very difficult. The difficulty is to obtain a bona fide guru which you have obtained by your great fortune.” Speaking thus, the soul of that boy left.

Kritadyuti’s co-wives felt ashamed of their act and performed atonement for it. Citraketu, thus enlightened, comes out of dark well of ignorance as an elephant becomes free from muddy water. Bathing in Yamuna, he chants the mantra given by Narada muni and perfects his life taking full shelter of the Lord. He sees the Lord face to face and the Lord further enlightens him assuring him ultimate perfection.

How to cross over the ocean of upheavals?

Srila Prabhupada writes, “As living entities, we are being carried away by the waves of prakrti, or nature, which works under the Lord’s direction (mayadhyaksena prakrtih suyate sa-caracaram [Bg. 9.10]). Bhaktivinoda Thakura sings, (miche) mayaravase, yacchabhese’, khacchahabudubu, bhai: “Why are you being carried away by the waves of the illusory energy in various phases of dreaming and wakefulness? These are all creations of maya.” Our only duty is to remember the supreme director of this illusory energy—Krsna. For us to do this, the sastra advises us, harer nama harer nama harer namaiva kevalam [Cc. Adi 17.21]: one should constantly chant the holy name of the Lord—Hare Krsna, Hare Krsna, Krsna Krsna, Hare Hare/ Hare Rama, Hare Rama, RamaRama, Hare Hare.” (6.16.53-54 P)

We are tossed in the oceanic waves of this material world. The only way to cross over is to remember the Supreme Lord by chanting His names. We are in the insurmountable darkness of sorrow of this material world, and the only light of hope is the association of pure devotees and their instructions for our upliftment.

ISKCON Ministry of Education Newsletter (May 2020)
SP: As much as possible try to increase our preaching programs by using all the mass media which are available!