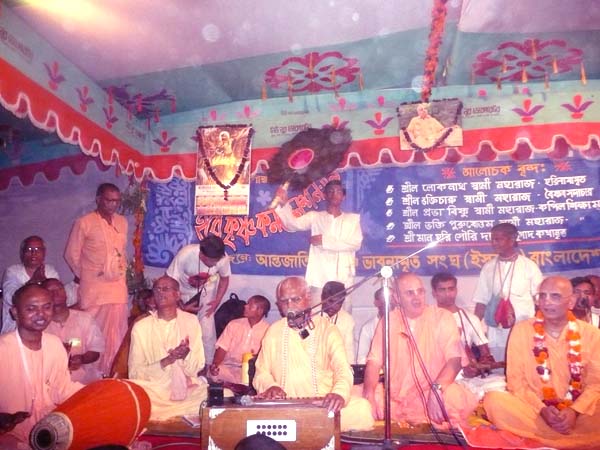 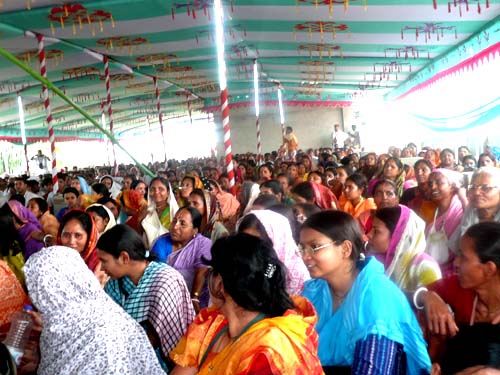 Around one thousand enthusiastic devotees gathered for four days at the holy place of Rupa Sanatan Smrithi Tirtha situated in the Jessore District of Bangladesh in order to celebrate the first annual Hare Krishna convention. As guest speakers we welcomed HH Lokanath Maharaja, HH Bhakti Charu Maharaja, HH Prabhavisnu Maharaja and his Grace Hari Sauri Prabhu, with HH Bhakti Purusottama Maharaja being the host of the event.

The main theme of the gathering we found in one of Srila Prabhupada’s famous letters: “Now I want that we shall concentrate on making our devotees Krishna conscious and ourselves becoming Krishna conscious, and not be so much concerned with expanding ourselves widely but without any spiritual content. Just like boiling the milk, it becomes thicker and sweeter. Now do like that – boil the milk.”

We remembered how Lord Caitanya Mahaprabhu was meeting with His associates and followers in an intimate setting – behind closed doors, under the exclusion of the general public. In the same spirit we were careful to have only practising devotees attend the auspicious event.

Throughout the day we were absorbed in hearing about deeper aspects of devotional life, and the evenings were spent in wonderful kirtans. It was HH Lokanath Swami’s first visit to Bangladesh, and his wonderful kirtans were the center of the festival. Bangladesh is famous for having the best musicians, and devotees were playing a variety of musical instruments including violine, sitar and other string instruments. The stage was beautifully decorated with fresh flower garlands – witnessing the kirtan scene was simply a transcendental feast for the mind and heart: a glimpse into the spiritual world. I couldn’t help but remembering the wonderful sight of the abhishek of the Pancha Tattva Deities in Mayapur this year, and those kirtans transmitted the same taste and flavour – simply out of this world. With descriptions of the first Kheturi festival in mind we had no doubt that the transcendental atmosphere and pure chanting had attracted Lord Caitanya Mahaprabhu and His associates to participate in these kirtans.

The accomodation and living conditions at the festival site were simple, nevertheless all the devotees were very joyful and deeply satisfied at heart, since it was the very first time they had experienced such kind of uplifting event.

We concluded the festive gathering with a public pandal program on the last evening, which was attended by around 40.000 people throughout the day and evening, coming from the 96 surrounding Hindu villages. Various dignitaries and political leaders attended the program in the evening. HH Lokanath Swami and His Grace Hari Sauri Prabhu took the opportunity to travel further in a small group of devotees to visit Kheturi Dhama.

Inspired by HH Niranjana Swami’s annual festival in Ukraine we decided to regularly arrange for this ‘boiling-the-milk festival’ at Rupa Sanatan Smrithi Tirtha in the future years to come.