How to Get Through Tests 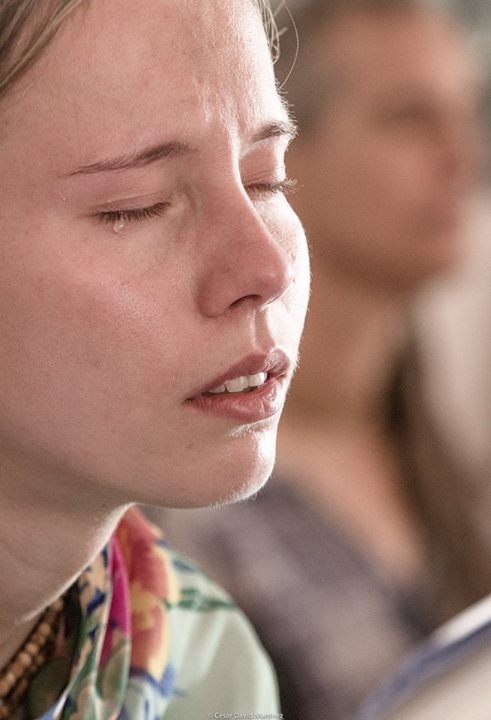 How to Get Through Tests.
All of us will encounter tests on our way. Once Indradyumna Maharaja told me a pertinent story: many years ago Maharaja was on sankirtana with a group of brahmacaris. They were planning to sing in the streets of Paris. It was a particularly difficult day: first the petrol in the car ran out in the middle of the highway. After they solved this problem by walking to the nearest gas station to bring more fuel, they continued to drive until one of the tires punctured. Finally, after a mechanic repaired the tire, they arrived in Paris – much later than planned – and it started raining! They found a sheltered area and started to sing, but immediately a lady came by, stopped, walked right up to Indradyumna Maharaja and put her fingers into her ears and stuck her tongue out at him. Indradyumna Maharaja tried to step away from her but she followed him! It was quite discouraging – because how could others be inspired with such a person present? When they came back to the temple in the evening, Srila Prabhupada called Indradyumna Maharaja into his room, as if he knew. Prabhupada said, “So, how was sankirtana?”
Indradyumna Maharaja first hesitated to narrate the details but Prabhupada wanted to know – you must know Prabhupada was extremely personal and looked into the smallest details of things. So Indradyumna Maharaja told him his story of frustration. When he came to the part about the lady and wanted to explain what she did, Prabhupada knocked on the table with his fist, making his glasses jump and said “When did I ever say preaching is easy?” So my dear devotees, when you face a test, don’t despair! As you go through it, you will feel Krishna’s presence; you will feel him helping you and when you emerge on the other side you will notice that you have advanced significantly in your Krishna consciousness. Tests are meant to make you strong; furthermore, Krishna will never give you a test that is overwhelming in its difficulty. He will give you tests that are specifically tailored to your level of determination and steadiness.
From a lecture by Sacinandana Swami in Almviks Gard, Sweden.

“Hearing is Our Main Business”

Kiwi Land (Album with photos) Indradyumna Swami: The town of…