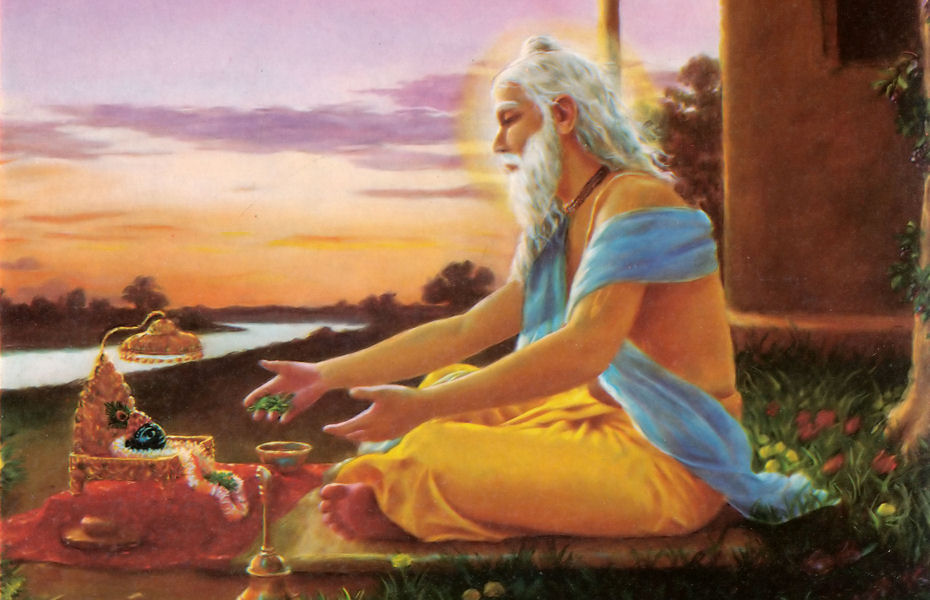 To honor Sri Advaita Acharya’s appearance day, we present Srila Prabhupada’s talk about him in Mayapur on April 6, 1975.

“Because He is nondifferent from Hari, the Supreme Lord, He is called Advaita, and because He propagates the cult of devotion, He is called Acarya. He is the Lord and the incarnation of the Lord’s devotee. Therefore I take shelter of Him.” (Cc Adi 1.13)

So, gradually the author is offering respect: sri-krsna-caitanya prabhu-nityananda sri-advaita. He has already offered respect to Lord Chaitanya and Lord Nityananda. Now it is the turn for Sri Advaita Acharya. Advaitam: “nondifferent”—He is expansion of Maha-vishnu. He is visnu-tattva. He is not jiva-tattva. Therefore He is Advaita. Advaitam acyutam anadim ananta-rupam. Krishna has got unlimited number of expansions—expansions, expansions of the expansions, and then expansions of those expansions, in this way. So Advaita Acharya is an expansion of Krishna, as already explained. Therefore He is called advaitam.

And acaryam bhakti-samsanat. This is the business of acharya: to spread the bhakti cult. Acaryam mam vijaniyan navamanyeta karhicit. It is said by the Lord, “You should accept the acharya.” Acharya means one who transmits the bhakti cult. Bhakti-samsanat, spreading—gosthy-anandi. One who is not spreading—he is cultivating Krishna consciousness for his personal benefit in a secluded place, sitting and chanting—that is also nice, but he’s not acharya. Acharya means he must spread—gosthy-anandi. Bhajananandi, gosthy-anandi. Generally, gosthy-anandi means one who wants to increase the number of devotees. He’s called gosthy-anandi. And one who is self-satisfied, that “Let me do my own duty,” he is called bhajananandi.

My guru maharaja, Bhaktisiddhanta Sarasvati Thakura, was a gosthy-anandi; he wanted to increase the number of devotees. And the more you increase the number of devotees, the more you become recognized by Krishna. It is Krishna’s business. Krishna personally comes as He is to spread this bhakti cult. Man-mana bhava mad-bhakto mad-yaji mam namaskuru. Sarva-dharman parityajya mam ekam saranam vraja. He’s canvassing personally.

“To deliver the pious and to annihilate the miscreants, as well as to reestablish the principles of religion, I Myself appear, millennium after millennium.” (Gita 4.8)

So, the same thing is entrusted to another devotee, who spreads—he’s acharya. So Krishna says, the acharya . . . Here it is said, advaitam harinadvaitad. Of course, Advaita Acharya is expansion of visnu-tattva, but any acharya is to be considered identical with the Lord. The Lord says that: acaryam mam vijaniyan—“One should understand the acharya.” Acaryam bhakti-samsanat. Acharya means one who is spreading the pure bhakti cult. “That acharya,” Krishna says, “you should consider as Myself.”

“One should know the acarya as Myself and never disrespect him in any way. One should not envy him, thinking him an ordinary man, for he is the representative of all the demigods.” (SB 11.17.27, Cc Adi 1.46).

You cannot consider, “Yes, he’s acharya, but not as good as Krishna.” No. Navamanyeta: don’t deride in that way. Then there will be falldown. Acaryam mam vijaniyan navamanyeta karhicit. And in the Vedas also it is said:

“Only unto those great souls who have implicit faith in both the Lord and the spiritual master are all the imports of Vedic knowledge automatically revealed.” (Svetasvatara Upanishad 6.23) All the Vedic literature becomes revealed (prakasante) simply by these two principles.

Guru-krsna-prasade paya bhakti-lata-bija. We should not jump over to Krishna, without the help of guru. That is not possible. You must go through, because Krishna says, tasmad gurum prapadyeta jijnasuh sreya uttamam: “One who is actually serious to understand higher transcendental subject matter, he must approach guru.” Tasmad gurum prapadyeta. These are Vedic injunctions. Cakhu-dan dilo jei, janme janme prabhu sei. Anyone who opens . . . Guru means one who opens the eyes of the ignorant person. Ajnana-timirandhasya jnananjana-salakaya—opening the eyes by giving real knowledge. Guru-krsna-prasade paya bhakti-lata-bija. The bhakti-lata, the seed of devotional service, can be received by the parampara system through a bona fide spiritual master. And if we abide by the orders of spiritual master faithfully, then Krishna becomes pleased. That is stated by Visvanatha Cakravarti Thakura: yasya prasadad bhagavat-prasadah. Ar na koriho mane asa—Narottama dasa. All the acharyas say like that.

Acaryavan puruso veda: “One who has accepted acharya, he knows things as they are.” Others, they do not know; it is not possible. So Advaita Acharya is the typical example of how to become acharya. All are our acharyas: sri-krsna-caitanya prabhu-nityananda sri-advaita gadadhara srivasadi-gaura-bhakta-vrnda. All of them are acharyas because they are following the supreme acharya, Chaitanya Mahaprabhu. Therefore they are acharyas. Evam parampara-praptam imam rajarsayo viduh.

So, we have to follow the acharya. Then, when you are completely, cent percent, follower of acharya, then you can also act as acharya. This is the process. Don’t become premature acharya. First of all, follow the orders of acharya and become mature. Then it is better to become acharya. We are interested in preparing acharyas, but the etiquette is, at least for the period when the guru is present, one should not become acharya. Even if he is complete, he should not, because the etiquette is if somebody comes for becoming initiated, it is the duty of such person to bring that prospective candidate to his acharya, not that “Now people are coming to me, so I can become acharya.” That is avamanya. Navamanyeta karhicit. Don’t transgress this etiquette. Navamanyeta. That will be falldown. Just like during the lifetime of our guru maharaja, all our godbrothers who are now acting as acharya, they did not do so. That is not etiquette. Acaryam mam vijaniyan navamanyeta. That is insult. If you insult your acharya, then you are finished. Yasya prasadad bhagavat-prasado yasyaprasadan na gatih kuto ’pi—finished. If you displease your acharya, then you are finished. Therefore it is said—Chaitanya Mahaprabhu says to all the acharyas . . . Nityananda Prabhu, Advaita Prabhu, and Srivasadi-gaura-bhakta-vrnda, they are all carriers of orders of Sri Chaitanya Mahaprabhu.

So, try to follow the path of acharya process. Then life will be successful. And to become acharya is not very difficult. First of all, become a very faithful servant of your acharya: follow strictly what he says and try to please him and spread Krishna consciousness. That’s all. It is not at all difficult. Try to follow the instruction of your guru maharaja and spread Krishna consciousness. That is the order of Lord Chaitanya. Amara ajnaya guru hana tara’ ei desa, yare dekha tare kaha ‘krsna’-upadesa: “By following My order, you become guru.” And if we strictly follow the acharya system and try our best to spread the instruction of Krishna . . . Yare dekha tare kaha ‘krsna’-upadesa. There are two kinds of krsna-upadesa. Upadesa means instruction. Instruction given by Krishna, that is krsna-upadesa, and instruction received about Krishna, that is also krsna-upadesa. Krsnasya upadesa iti krsna-upadesa. Samasa, sasti-tat-purusa-samasa. And krsna visaya upadesa, that is also Krishna upadesa. Bahu-vrihi-samasa. This is the way of analyzing Sanskrit grammar. So Krishna’s upadesa is Bhagavad-gita. He’s directly giving instruction.

So, those who are spreading krsna-upadesa, simply repeat what is said by Krishna. Then you become acharya. Not difficult at all. Everything is stated there. We have to simply repeat like parrot. Not exactly parrot. Parrot does not understand the meaning; he simply vibrates. But you should understand the meaning also. Otherwise, how you can explain? So, we want to spread Krishna consciousness. Simply prepare yourself how to repeat Krishna’s instructions very nicely, without any malinterpretation. Then, in future . . . Suppose now you have got ten thousand. We shall expand to hundred thousand. That is required. Then hundred thousand to million, and million to ten million.

Srila Prabhupada: So, there will be no scarcity of acharya, and people will understand Krishna consciousness very easily. So, make that organization. Don’t be falsely puffed up. Follow the acharya’s instruction and try to make yourself perfect, mature. Then it will be very easy to fight maya. Yes, acharyas declare war against maya’s activities. Maya is instructing, “Here is wine, here is cigarette, here is . . .” In your country these advertisements are very prominent—wine advertisement, cigarette advertisement, naked woman advertisement, and sometimes also gambling advertisement. What is that? Congo?

Srila Prabhupada: Bingo. Yes. So, this is maya. And our declaration of war against maya—no intoxication, no meat-eating, no bingo. This is our declaration of war. So, we have to fight in that way, because nobody can understand Krishna without being free from all sinful activities. These are sinful activities. Therefore it is the acharya’s business to stop these nonsense activities. Otherwise they’ll not be able to understand, especially the meat-eaters. They cannot understand.

Unless one is very expert in killing animals, he is not bereft of Krishna consciousness. That means one who is very expert in killing, he cannot understand. Therefore Christ also said, “Thou shall not kill”—the first business. Nobody will be able if one is a killer of animals, small or big—ultimately killer of his own children, killer of his own self. The killing process is so nice that it goes up to the point of killing one’s children. That is now happening. The killing business has so expanded that they are killing their own children. Just see the influence of Kali-yuga. The children take shelter of the father and mother, thinking themselves very safe. Now, in this Kali-yuga, there is no safety even under the care of father and mother. Just see how this material civilization is progressing. Very, very dangerous. Kalau nasta-drsam. Therefore that Bhagavata verse is there:

“This Bhagavata Purana is as brilliant as the sun, and it has arisen just after the departure of Lord Krsna to His own abode, accompanied by religion, knowledge, etc. Persons who have lost their vision due to the dense darkness of ignorance in the age of Kali shall get light from this Purana.”

Very, very abominable condition in this age of Kali—very, very. It is the beginning of Kali. Now we have to pass through 427,000 years. Kali-yuga will make progress in that way. And people are now practicing eating their children, and at the end of Kali there will be no food available. They’ll have to eat the children, like the snakes do. The snakes eat their own children. There are many animals who eat their own children. So, don’t try to repeat your birth again and again in this Kali-yuga. It will be not very happy life. Better sacrifice everything in this life and be fully Krishna conscious and go back home, back to Godhead. Don’t wait for the next life. This is very seriously repeated, that “This life I shall finish my Krishna consciousness business.” And as it is stated in the Bhagavad-gita, Krishna consciousness business means to understand Krishna rightly. And He’s explaining Himself rightly. Where is the difficulty to finish the Krishna consciousness business? If Krishna is explaining Himself—what He is—then where is your difficulty? Krishna is explaining Himself in the Bhagavad-gita, Krishna is sending His representative, acharya, to teach you, and Krishna is within you trying to teach you, if you are actually serious. Then where is the difficulty? Inside, outside, all ways—books, knowledge—He is prepared.