Today Bhishma Dev, a great devotee of the Lord left His body… 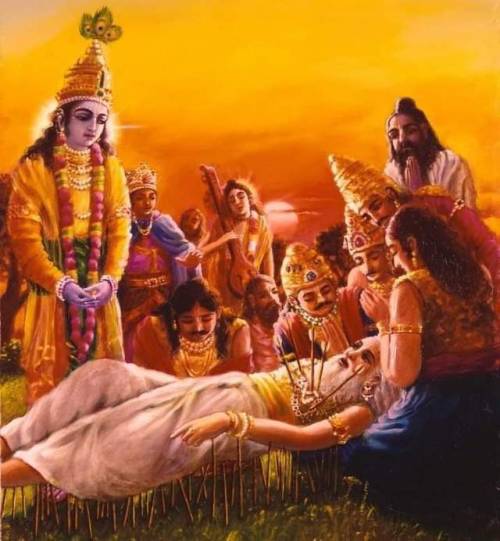 Today Bhishma Dev, a great devotee of the Lord left His body with Krishna beside Him which also means Krishna was in Kurukshetra today.

Today is a very auspicious day!

Srila Prabhupada glorifies Bhisma and his passing away

What exactly is Bhishma Ashtami?

Bhishma Ashtami marks the event of Bhishmadev willfully leaving his body after lying on the bed of arrows for 18 days after the Kurukshetra war. It falls on the Ashtami of the Shukla Paksha of the Magh month. This period was considered auspicious as it was Uttarayana (daytime for the devas in the heavenly abode) and thus, Bhishmadev chose to remain alive till the arrival of this period.

The process of Bhishmadev leaving his body is described in Srimad Bhagavatam (1.9.43) as follows: “Suta Gosvami said: Thus Bhishmadeva merged himself in the Supersoul, Lord Sri Krishna, the Supreme Personality of Godhead, with his mind, speech, sight, and actions, and thus he became silent, and his breathing stopped.”

Srimad Bhagavatam (1.9.45) further glorifies his passing away as follows: “Thereafter, both men and demigods sounded drums in honor, and the honest royal order commenced demonstrations of honor and respect. And from the sky fell showers of flowers.” Bhishmadev was respected by human beings, heavenly beings and devas for his determination, valor, righteousness, and devotion. He was a warrior and an ascetic too.

Bhishmadeva was respected both by human beings and by the demigods. The human beings live on earth and similar other planets in the Bar and Bhuvar group of planets, but the demigods live in the Svar, or heavenly planets and all of them knew Bhishmadeva as a great warrior and devotee of the Lord.

As a Mahajana (or authority) he was on the level of Brahma, Narada, and Shiva, although he was a human being. Qualification on a par with the great demigods is possible only on attainment of spiritual perfection.

Thus Bhishmadeva was known all over the universes, and during his time interplanetary travel was affected by finer methods than the futile endeavors of mechanical spacecraft. When the distant planets were informed of the passing away of Bhishmadeva, all the inhabitants of the upper planets as well as of the earth dropped showers of flowers to show due respect to the departed great personality.

This showering of flowers from heaven is a sign of recognition by great demigods, and it should never be compared to the decoration of a dead body. The body of Bhishmadeva lost its material effects due to being surcharged with spiritual realization, and thus the body was spiritualized as when iron becomes red-hot when in contact with fire.

The body of a fully self-realized soul is not, therefore, accepted as material. Special ceremonies are observed for such spiritual bodies. The respect and recognition of Bhishmadeva are never to be imitated by artificial means, as it has become a fashion to observe the so-called Jayanti ceremony for any and every common man.

Mobile App Release of Ultimate Self Realization Free E-Course
The role of faith in devotional service
Tagged under: Nectar