The Marriage of Heaven and Earth (In the Gaudiya Vaishnava Tradition) 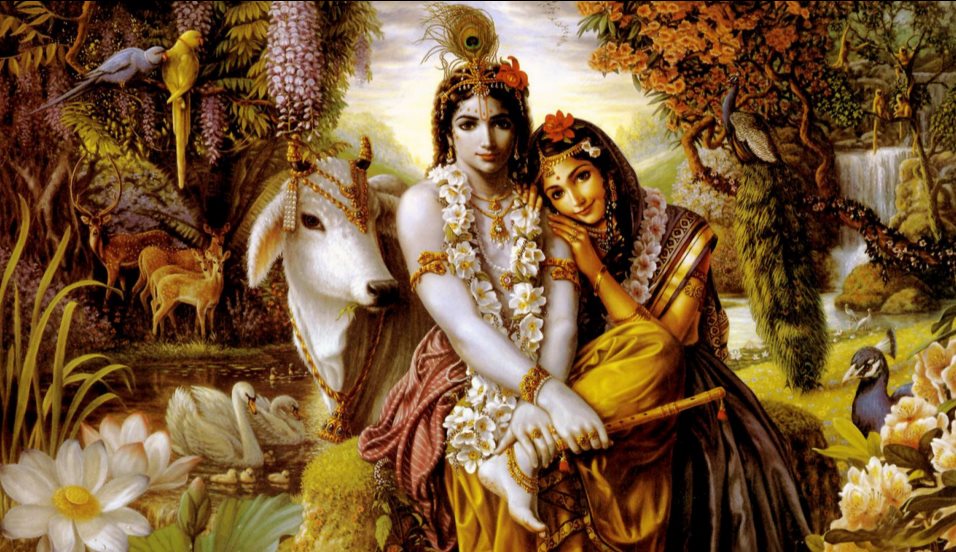 First, its meaning lies in seeking a happy life on Earth, based on dharma and oriented towards Heaven. May marriage shine for its steadiness. May the union of marriage not be a comet that suddenly illuminates the sky but shortly after disappears into nothingness forever.
________________________________________
According to the Rig-Veda, the groom and the bride should retreat to their home once the fire ceremony has ended and remain silent until evening, waiting for the stars to come out. And when the stars are shining, they should look for one in particular – the polar star- the one that is recognizable for the way it shines steadfastly. At that moment, the two spouses offer prayers together in order to become as stable in their vows as that star in the sky.

The union of marriage is based on such stability and this virtue is one of the main values that makes it truly sacred. To get married, according to the tradition, means to build a relationship founded on religious principles. This relationship’s value persists beyond time, regulates and harmonizes the entire emotional sphere through an eternal promise of fidelity, esteem, respect and cooperation in serving God. Marriage is in its essence a samskara.

This Sanskrit term has two main meanings: in one sense it indicates the impressions or psychic events that have a positive or negative influence on consciousness, depending on their nature; and in another sense, it means ‘sacrament’. Marriage is a samskara; one of the ten sacraments that serve to elevate a person’s consciousness from the human level to the spiritual experience. Such elevation and transformation of consciousness is the purpose of human life. Samskaras trace and orient the path of a person in the world, from birth to death.
The first samskara, garbhodana samskara, is celebrated before the child is even conceived, as it takes place when parents plan the act of procreation. From this first samskara to the last (that hopefully marks the great departure from the earthly dimension to a superior one) a major step in the path of the human being is the one that coincides with the samskara of marriage, vivaha samskara, when a person becomes two through the encounter with another soul, and together they form an indissoluble unity, while each maintains one’s own autonomy and individuality.

Unfortunately, in the vast majority of cases today, people marry without any true awareness of the spiritual significance of marriage. Far too much attention is paid to external aspects and too little to the inner and the fundamental ones. Without building a relationship on a solid and value-driven basis, the relationship cannot withstand the storms of life.
Traditionally, marriage is conceived as a union between two persons having the higher purpose to help each other live fully and joyfully their humanity in order to accomplish their spiritual fulfillment.
Spiritual awareness is the greatest wish and the most precious gift we can offer to those who undertake the way to married life.

Only through spiritual awareness is it possible to face the Odessey of incarnated life and make the story of one’s own existence a real success.
Spiritual awareness and the mutual affection that comes from it, helps us to face the trials and crises that are essential to overcome if we want to transcend our human limitations.
In order to avoid our wishes remaining vain, they should be based on spiritual Good because marriage does not only strive for the union of two bodies but for a particular relationship between two souls.

Two spiritual beings become bound in a transcendent union that will give sense to their relationship and give meaning, strength and vigor as they face the difficulties that we all inevitably encounter in life. People will be able to overcome obstacles so long as the spiritual purpose of the matrimonial relationship is kept alive and renewed consciously.

The purpose of religious marriage is the domain of the senses and the mind, and ultimately, of spiritual evolution. It teaches one to act in harmony with the divine-cosmic-ethical order.
Since all of what we do on Earth has an impact in Heaven, the Good we want to build into the dimension of immortality should be carried out here, in this world and through the passage of time. May marriage be made sacred by respecting the principles of dharma, and may it always be enlivened by the awareness and joy of its spiritual dimension.
We can only forever possess what we offer as a sacrifice. On the other hand, we lose what we withhold selfishly. In reality, it was never truly ours to begin with.
Only what we love remains stable with and within us.

To love something, we have to care for it with the utmost attention, esteem and respect because even the smallest offense reduces our capacity to love.
If we want to keep the treasure that is a relationship over time and make it always greater, satisfactory and beneficial to us and to others, we must invest in this treasure every day.
Even relationships, if they are not constantly nurtured day after day, become worn out and it becomes difficult to maintain them.

Bhakti implies a constant commitment and care otherwise even God disappears from our consciousness. And what to say about a groom or a bride, parents, children or relatives. Only those relationships we have been able to cultivate and keep alive with the right motivations will remain: the ones with depth, stability, immortal values and which transcend time and space. These values ??abide by the divine spiritual matrix, which is the essence of each person and that a bride and groom should cultivate it in one another.

Marriage is a pact of mutual help, where one promises mutual fidelity on the basis of spiritual commitments that have been deliberately taken on. In its cosmetic-ethical value, more than a union between two persons, marriage is in fact the connection between Earth and Heaven, as Vedic Revelation states. It is a pact between the Son of the Sun and the Daughter of the Moon.
In fact, what is celebrated on the human level has only a subordinated value to what happens on the cosmic level. Marriage, in its essence of sacred union offered to God, invokes divine energies. It is anchored to eternal spiritual values ??and in this respect, it is an anthropo-cosmic event. Because of its spiritual value, it will exist eternally. No human act can exist without a divine association.
Religious marriage connects Earth to Heaven and is a tool of spiritual elevation and authentic Good for everyone.