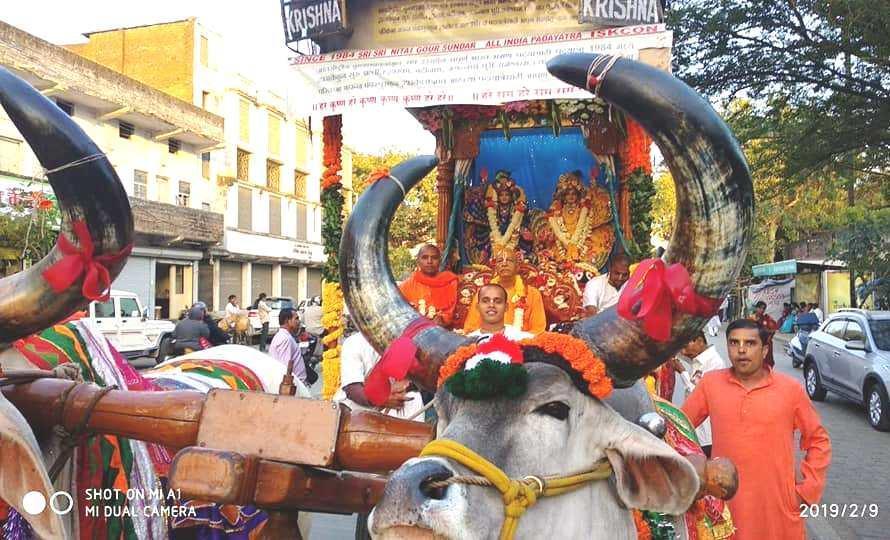 After preaching in Maharashtra’s Bhandara district the All-India Padayatra entered Nagpur city at Suryanagar on February 7. Walking for a further 7km, we reached the ISKCON Radha-Gopinath temple in Empress City, where the devotees welcomed Sri Sri Nitai-Gaurasundar with garlands and a grand sankirtan. The matajis then washed the hooves of our oxen, showered flowers on them and performed arati of Their Lordships.

The following day we went to Buldi area along with the congregation devotees for sankirtan and book distribution and then continued to Manewada area where we attended three home programmes at the houses of Venugopal dasa, Dr Bhajanpremi dasa, and Anadi Krishna dasa. As Lokanath Maharaja was arriving in Nagpur we also went to the airport to meet him. After a long wait we were blessed by Maharaja’s darsana and to receive prasad from him.

February 9 was Nagpur’s Jagannatha Ratha-yatra, so all of us padayatris with Sri Sri Nitai-Gaurasundar’s cart joined the parade, a wonderful event with the AIP and Ratha-yatra walking together in Nagpur for the first time. People were surprised to see two carts in the parade, and there were also two kirtan parties, one formed by our padayatris and the other by guest devotees including Ekalavya dasa, Sundarlala dasa and Shyamsundar dasa. Our cart was first in the procession and behind us came the ratha of Their Lordships Jagannatha, Baladeva and Subhadra. People were amazed to see our magnanimous oxen, and as we passed each house out would come two arati plates, one for Nitai-Gaurasundar and the other for Jagannatha, Baladeva and Subhadra, and several onlookers came forward to wash the hooves of our oxen and offer garlands to Nitai-Gaurasundar The devotees were ecstatic but uncertain where to look, at Nitai-Gaurasundar or at Jagannatha, and their hearts and eyes went back and forth from the padayatra cart to Lord Jagannatha’s ratha, with many devotees walking for a while with us and then with the ratha.

We had taken darsana of Lokanath Maharaja at the airport but could not talk for long. I had been hoping we would have a meeting with him when Anadigaura dasa called to say Maharaja wanted to see us. When I told the padayatris we would be talking with Maharaja, they all jumped for joy. The following morning, we visited Maharaja for about an hour. He spoke to each one of us, asking after our health and congratulating us for serving at the walking temple. We shared some of our experiences with him and asked for his blessings. Maharaja also gave us good news: “All-India Padayatra is the mother of all smaller padayatras, as mother gives birth to a child. We will soon inaugurate a Maharashtra padayatra and you will need to train and guide the new devotees joining it.”

In the coming days we held programmes at the homes of several devotees including Karunkaruna dasa, Mahanidhi dasa, Amoghalila dasa, and Garudawaja dasa. When we were at Garudawaja’s house we were also called to Abhinanda dasa’s house, as he had a strong desire that Nitai-Gaurasundar’s cart should come to his residence, but I declined citing the need to move on. As the programme at Garudawaja’s continued, I realized it was becoming late, so I asked how far it was to Abhinanda’s house. Hearing we could easily walk the distance we started out for his house. When he saw us, he was overjoyed and welcomed us gladly. His house was small, but his heart was big, and we were accommodated nicely.

The day after Ratha-yatra we were heading towards Wadi area. While walking we noticed a boy who appeared to be waiting for us. He looked lost, unhappy and disturbed. I asked him who he was waiting for and he said, “I don’t know. I am tired of this life and I’m going to commit suicide as there is no use in living.” I was shocked. I held his hand and pulled him near the cart and told him to take darsana of Their Lordships. His eyes filled with tears, but he listened patiently as I explained: “We can’t commit suicide. This body belongs to the Lord and is His property. If we die before our time, the Lord is unhappy with us and we become ghosts.” I gave him prasad and told him not to waste this human life and to pray to Their Lordships for help. I also folded my hands and prayed for him. He seemed a little pacified and smiled as if he had heard some of the answers to his dilemma.

We were about to visit Ramtek, about 50km northwest of Nagpur, so I asked him his name and if he would like to join us. He told me his name was Swapnil and that he didn’t have money with him to go anywhere, so I offered to pay his expenses. He accompanied us and danced happily on sankirtan. When we returned to Nagpur, I arranged for him to meet Rupa Raghunatha Maharaja and Akhildara dasa who counselled him and gave him chanting beads. He was astounded when the padayatris gave him clothes and some other things he needed. “Why are you all helping me so much?” he said. “You hardly know me.” I told him, “It’s the Lord’s mercy upon you.”

The padayatris then went to the Jagannatha Ratha-yatra in Amravati and again we took him with us and paid his way. He danced and sang with us on Ratha-yatra and attended mangala arati. We also brought him to Lokanath Maharaja who asked him how he was feeling. He said only one word, “Vaikuntha.”

Back in Nagpur he took us to his house, a good family home. His parents, who had been searching for him, were delighted to see him and with tears in their eyes they and his wife declared, “You have saved him.” I replied, “Not me, it’s Nitai-Gaurasundar who saved him.” When they asked how they could serve us I was lost for words. Meanwhile Swapnil, an engineer by profession, saw our bicycle which was in a poor condition. He said, “Can I sponsor a bike for padayatra?” For a long time, I had been thinking we needed a new bike – and the Lord arranged it for us.
Nitai-Gaurasundar, ki jai.

Lordships at a house program

Padayatri with Lokanath Maharaja in rathyatra

Padayatris at Ramtek along with Mahanidhi Dasa

Padayatris with Gurudev at Nagpur airport-1