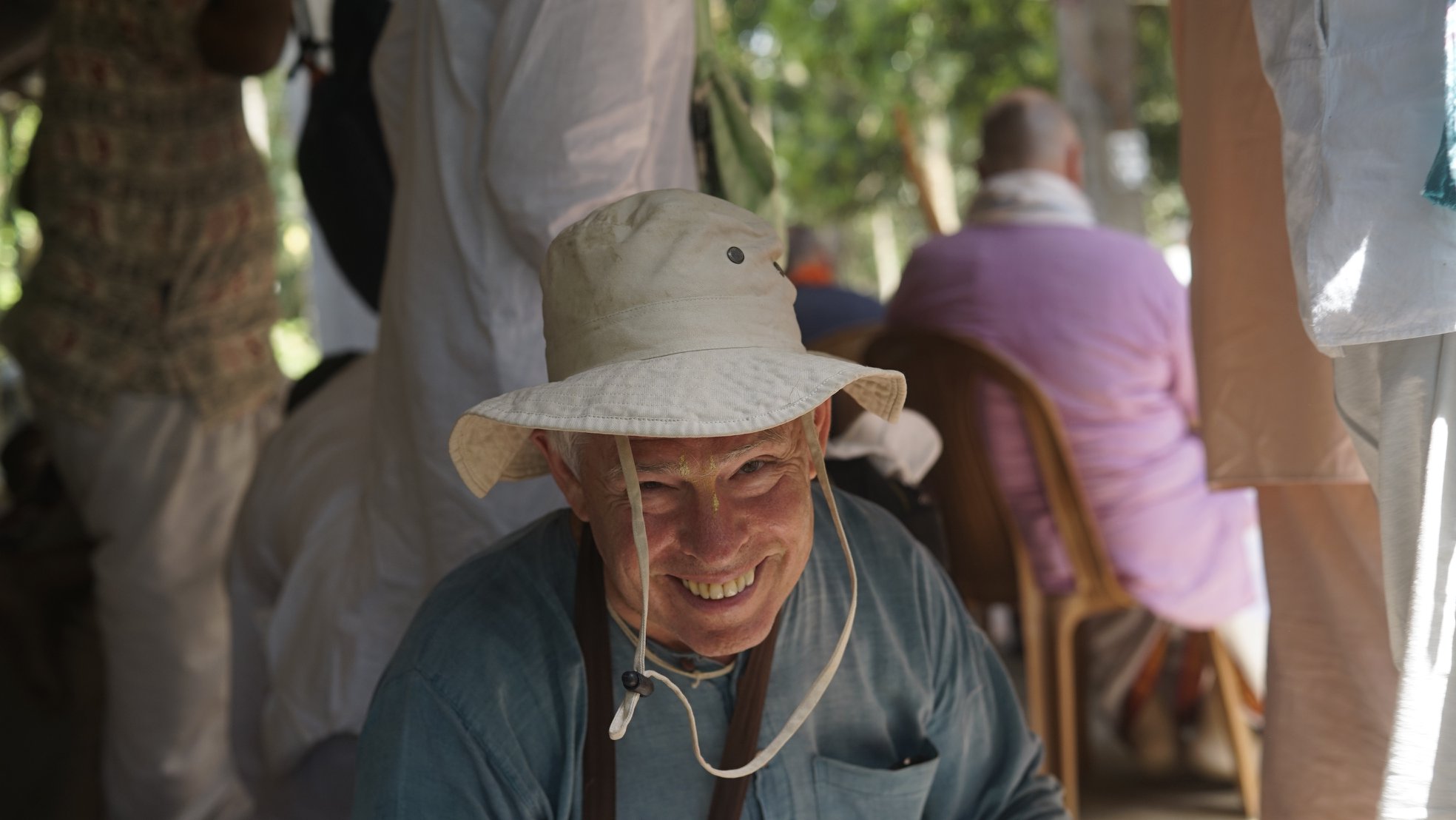 In the Parikrama 4th day we covered Rtudvipa and Jahnudvipa, processes arcana and vandanam respectively. Rtudvipa is where the house of the learned Vidya Vanaspati is situated and Jahnudvipa is the island where the sage Jahnu muni was living, once Bhismadeva came to visit him.

So, we can’t describe the happiness of the devotees to visit such sacred places! Champahati (or the market of jasmines) are one of the most beautiful places in Navadvipa Dhama. The Lordships Gaura Gadhadara are forever worshipped here. They were installed by Gadadhara pandit’s nephew. Campahatti is also the place where Jayadeva Goswami wrote his world famous Gita Govinda poems. In this very sacred place Jayadeva Goswami and his wife Padmavati had the darshan of the Supreme Personality of Godhead Sri Krsna! Every year the Parikrama party stop in Champatti and have a great time with Katha given by different sanyasis, drama, darshan and prasada.
Pancharatna prabhu did a play with the Parikrama devotees. We had speech from HH Bhakti Dhira Damodara Swami, Bhakti Vigna Vinash Narasimha Swami, HG Rajendra Nandana prabhu, HG Pankajangrhi prabhu and others.

The next stop was in the most celebrated Vidyanagar! So many pastimes happened there. This is the house of Vidya Vacaspati, the brother of Sarvabhauma Bhattacharya, once Caitanya Mahaprabhu was visiting him and thousands of devotees came to have darshan of the Lord, since they could not come all in by boats (not enough boats), they crossed the Ganga by swimming!!! We have beautiful Gaura Nitai deities there and always very amazing kirtans! Somebody was sponsored coconut water and sugar cane for everyone making the devotees very happy..
After Vidyanagar we headed to our camp to have a sumptuous non chilly (!) lunch prasada. Evening class was giving by HH Bhakti Dhira Damodara Swami and he enlightened the devotees by speaking to them about Rupa and Sanatan Goswami’s service in Sri Vrindavana drama.

All the sacred places we visit nowadays in Vrindavan were discovered and developed by Rupa-Sanatana under the divine order of Sri Caitanya Mahaprabhu! All glories!

Mayapur Planetarium (Album of photos) Ramai Swami: ISKCON...
It was a lifestyle!