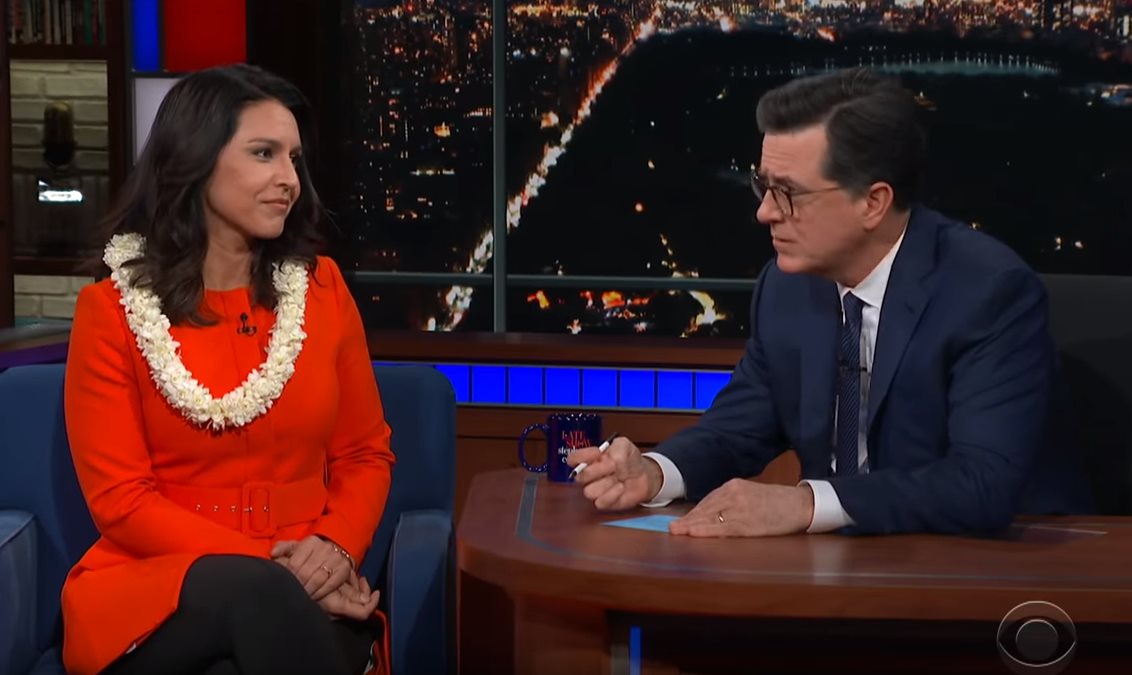 Some of you, especially in America may have seen the news that Tusi Gabbard is running for President of the USA. Of course Tulsi is by birth a Hare Krishna devotee and has the potential to be an instrument for many people to hear Krishna’s Holy Name and possibly steer society to a better course.
You may have seen the clip shown here on Dandavats (http://www.dandavats.com/?p=72585), 2 days ago, where she was interviewed by a CNN reporter in a town hall type forum. The audience asked different questions and Tulsi very expertly answered. She was asked about her connection with the Hare Krishna movement, which meant that hundreds of thousands of American people heard Krishna’s Holy Name.
On June 17th 1972, Srila Prabhupada wrote the following letter to Balavanta prabhu, “I am very glad to hear that you are keeping active in the political arena, and if we are able to establish Krishna Conscious leaders throughout the country in important posts we will be able to save everyone from the present dangerous position of the world. People in general are being guided into hellish conditions by the rascal leaders so we must establish qualified brahmanas at the head of society.”
There may not be a great chance that Tulsi will win the Democratic Nomination, or in other words be the official Democratic Presidential candidate. However, as we saw from the last election, where a rank outsider was actually nominated as President, then anything is possible.
From what I have seen of Tulsi, she appears to be a very genuine person who has a desire to serve her country, who has excellent credentials, being a Major in the US army and an Iraqi war veteran. She really cares about the environment and the direction the world is going in, and she is very open about her belief in Krishna, and desire to help others.
If Tulsi were to get sufficient support, she could achieve many important goals for Krishna Consciousness. There would undoubtedly be many people who would hear about Krishna, and if she attained more political power, many people’s lives would be benefited. As she said in the CNN meeting, even if the USA became a “green” country, unless the rest of the world embraced a green revolution, the world would still be environmentally, catastrophically headed; therefore dialogue about nuclear power and the environment were essential with other world leaders.
To pursue her goal of running for President and winning the Democratic Nomination, Tulsi needs 65K American supporters. To be a supporter one needs donate as little as $5 towards her campaign. Without those supporters her campaign will end.
Dear devotees, this is a golden opportunity to help spread Lord Chaitanya’s message throughout the world. We may not agree with everything Tulsi says, but the sheer value of her being a devotee of Krishna, and being asked about Krishna, is the biggest preaching opportunity since Srila Prabhupada left this world.
I have heard, but am unable to locate the quote, that Srila Prabhupada said that we would see an American Hare Krishna President in our lives.
Tulsi is also pro ISKCON and was present at the Washington DC celebration of Srila Prabhupada’s 50th Anniversary of ISKCON, where she spoke very highly of her Param Guru Srila Prabhupada, and led a sweet Kirtana with a ukalele.
So, thank you for your time and let’s hope that we may we have a Krishna conscious government before long.
Your servant,
Adikarta das