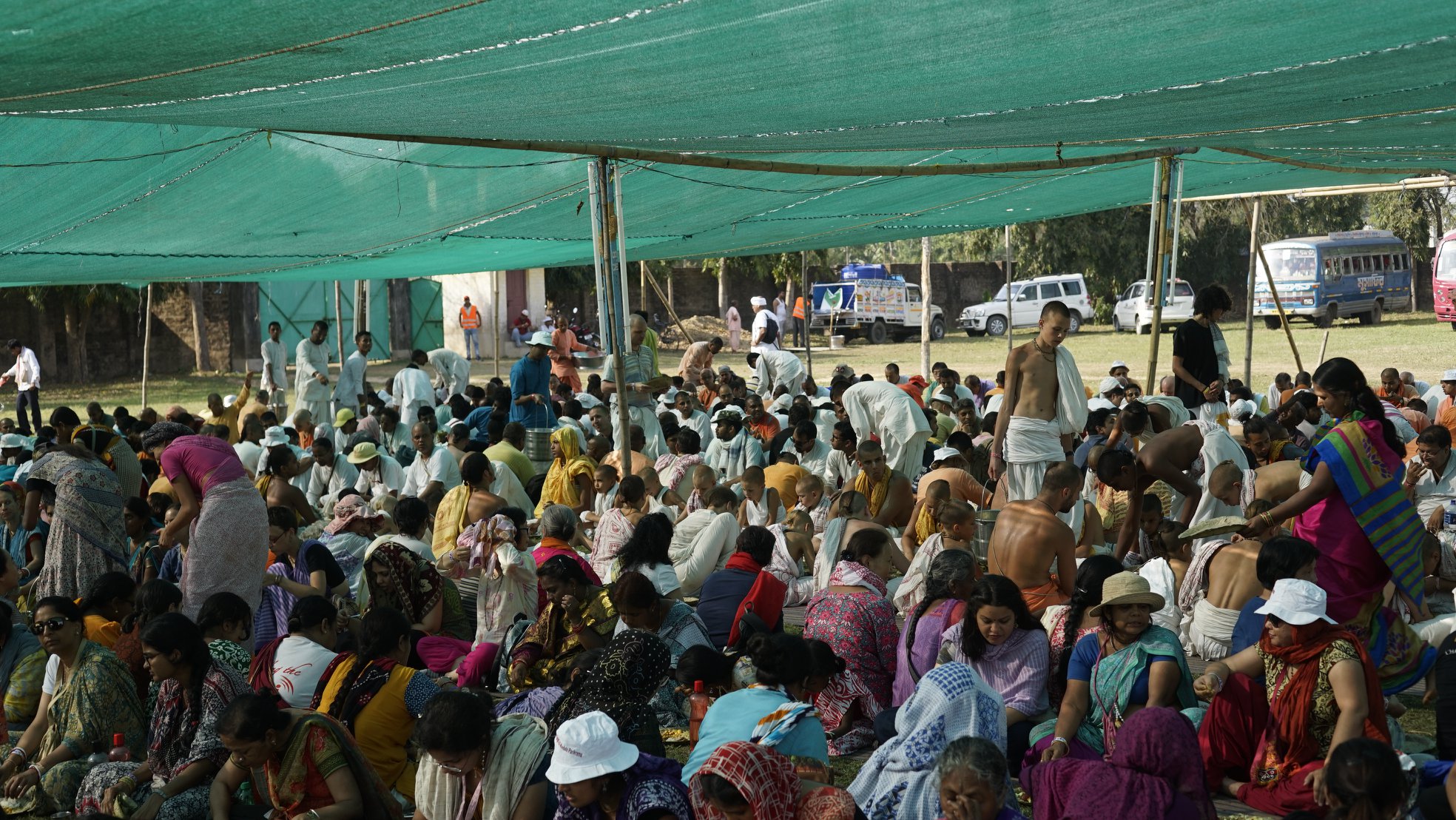 Today we visited Modadrumadvipa. As you already know, each of the nine islands correspond to one of the nine processes of devotional service according to our previous acharyas. Modadrumadvipa corresponds to dasyam (service in the mood of servant). Our speakers explained that in the same way that the celibacy pervades all the four ashrams, dasya rasa pervades all the other four rasas (shanta, sakhya, vatsalya and madhurya).

Lord Ramachandra and Sita devi had been to this island also during their exile, and the Lord revealed to Sita devi His pastimes here as a young sannyasi (Lord Gauranga).

We always have ecstatic lectures there giving by many senior devotees and a “wild” gurupuja. The deities are the original ones worshipped by Srila Vrindavana Dasa Thakur, which makes the darshan very special. Vrindavana dasa Thakur simply loved Sri Nityananda prabhu in the very meaning of the word ‘love’, I’m sure you heard that he was the son of Narayani, the four years old girl which Lord Caitanya gave Krsna prema bhakti during one of His Kirtans at Srinivasa Pandit’s house.

The next stop was the house of Saranga Murari, the famous guru who initiated a dead body that was floating in the Ganga in the early morning. His very unique pastimes made the devotees laugh when they heard the incredible activities of this unique vaishnava. The most humble and sincere Vasudeva datta was also living in this house and His beautiful deities are still there: Radha Madhan Gopal, they are very tall and Gopal has light blue body with big lotus eyes. Once Caitanya Mahaprabhu came to this place and for the pleasure of the devotees he saved a tree which was giving shadow in the courtyard. That very tree touched by Lord Caitanya’s lotus hand is still there.

Around 12:00 pm we reached our Camp at Pratapnagar, a small forest nearby the Ganges. You must know that all our camps are situated in our own ISKCON lands. Amazing! This land is 10 min walk from Ganga and all the devotees had time to go there and refresh themselves by swimming, talking or just lying down at the Ganga’s beach.

Maha Vishnu Swami Maharaj lead a kirtan after that time in the Ganga, and before Lunch prasada. Now our group look like a family of 1,200 people! Wow!! It seems that they know each other from the whole life!

Before Sandya arati HH Bhakti Vigna Vinas Narasimha swami gather those who want, in our question and answer sessions.
After Sandhya arati the class was giving by HG Rajendranandana prabhu: What is so special about the Holy Dhama. He shared with the devotees his realisations and experience of doing Sri Navadvipa Mandala Parikrama at least for 20 long years now.

See you tomorrow, we only have three more days to go!

A visit to the TOVP (Album of photos)
Dallas’ Mayor Rawlings invites all to Dallas Ratha Yatra (2 min....