Vaisnava culture of respect and honour 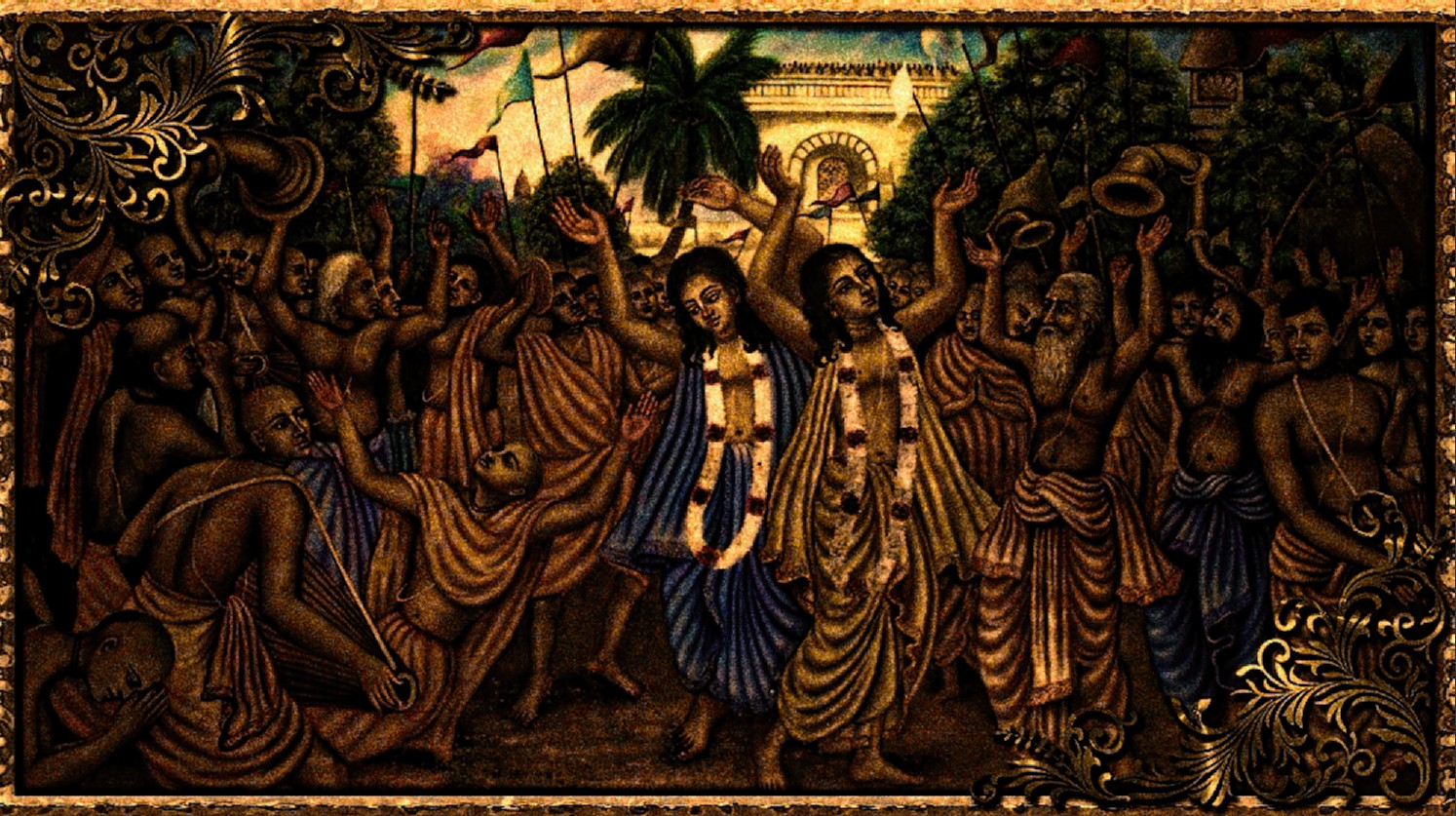 The media have for some time now, been gripped and enthralled by the phenomenal success of ‘reality tv’ shows like ‘Big Brother’ etc. Many would argue that material life consists of little but the shallow exhibition of vanity etc., that reality tv so proudly parades, so it is hardly surprising that it has been such a ‘success’.

While this particular genre is a recent development, history tells us that such developments will likely only get more daring and probably generate spin offs that will be of even less quality. The phrase ‘keep running to stand still’ comes to mind and just like the practice of spiritual life, if we are not enthusiastically engaged in making progress on the bhakti marg, then we run the very real risk of falling back in our spiritual development, as standing still is not an option.

One of the interesting dynamics of those who become ‘stars’ as a result of reality TV, is that their star is generally very much of the shooting variety. Even die hard fans of the such programs are probably hard pushed to remember the names of the participants once their star has begun to fade. For sure the cult of celebrity is indeed an unfortunate reality, from many angles of vision and the results of such unbridled desires for fame and importance, either material or spiritual, are not very auspicious;

“Anyone who has any desire or aspiration for satisfying his senses by becoming more and more important, either in the material sense or in the spiritual sense, cannot actually relish the really sweet taste of devotional service.” (NOD p. 33)

You will find little argument, at least from devotees, as to the motivation of those who sign up for reality tv shows. Still the desire for fame and distinction is not the exclusive preserve of reality tv contestants, rather it is a common vice for all of us. As devotees we strive to uproot the desire for fame and distinction but paradoxically, as devotees, we generally take as many opportunities to serve, appreciate and indeed glorify the service of other devotees. So naturally it is important that such glorification is appropriate, in so far as who it is directed to. Indeed devotees in receipt of such glorification would be very happy that any appreciation is commensurate with the factual reality and in proportion to whatever they are being appreciated for. In reality devotees are not desirous of such praise and essentially hearing such words of glorification is more or less something they shun.

That said we want to preserve our vaisnava culture of respect and honour, and giving appreciation to devotees is a big part of that culture. On the other hand being excessive with that particular aspect of our culture could inadvertently jeopardize the very tradition we are trying to preserve. Depending on the role and service we are engaged in, dealing with praise and honour will be a bigger challenge for some devotees than others. Sannyasis for example, being the spiritual leaders of society, experience all other members of that spiritual society bowing down before them, thus honouring them and the asrama they represent. Can you imagine in a large society having thousands of people bowing down in front of you on a daily basis? If you were not in good consciousness and deeply immersed in strong sadhana, it is easy to see how someone could lose the run of themselves.

Another service in ISKCON that arguably receives an even greater level of appreciation, respect and glorification is that of guru, particularly diksa guru. Another element related to the service of diksa guru, as it currently functions in ISKCON, is that if someone performing this service runs into spiritual difficulty then much attention is focused on the individual/s concerned and it can have quite a negative impact on our ISKCON society as a whole. As such it makes sense for us to work toward establishing an ever increasing stable and sustainable environment for devotees to perform the service of guru in.

ISKCON is more or less unique in vaisnava history, being an institution that is dedicated to spreading Krsna consciousness. During vedic times you would have what devotees often term as the traditional guru disciple relationship brahmacari guru-kule vasan danto guror hitam, a disciple living in a local village, where a local guru would teach the children of those who lived in the village, and more or less those villagers who stayed in the village with everyone living a simple lifestyle with no institution.

This is a subtle but significant difference from the traditional guru disciple relationship. It also raises the question of how a guru functions within an institution, particularly in the context of him no longer being a ‘sole trader’ so to speak, but rather being a member of a greater entity. The other issue it raises is the issue of authority, devotees serving as guru in ISKCON are not the ultimate authority as would be the case in the traditional vedic setting. This of course is something that not only the gurus have to embrace but also something the disciples have to understand as well. Ultimately of course when we talk about guru the essential point and indeed ‘tradition’, for being a bona fide guru, is that the guru must follow the instruction of his spiritual master. Given that Srila Prabhupada clearly wanted an institution to be the vehicle to spread Krsna consciousness and given he also clearly outlined the authority structure under which that institution would function, it is incumbent upon all of us to do everything we can to maintain – as is – what Srila Prabhupada has created. It is interesting to note the voluminous instructions from Srila Prabhupada on many many subjects, including how ISKCON should function, mirrored against some of his thoughts on initiation;

So the question may be raised; does the guru serving in an institution mean that his authority is diminished as a result of him not being the final authority? If we consider the following then no would be the answer; the guru’s authority comes from following the instructions of his guru. In the case of both Srila Prabhupada and also Srila Bhaktisiddhanta Saraswati Thakura, their wish was that all members of their institutions would subordinate themselves to the authority of an administrative, managerial body. Again the question may be raised; does this compromise the principle of acarayam mam vijaniyan¬ saksat hari. Again no, in so far as there is no risk or cost of honouring the order of your guru and therefore Srila Prabhupada used very very heavy words; asara useless, in relation to the break up of his guru’s institution.

One thought is that if the guru is an uttama adhikari and guaranteed not to fall down then there is no harm in him being the ultimate authority, indeed perhaps it is better that he is. However that debate is one we don’t need to enter into as our founder acarya has instructed us differently. In essence that instruction is that ISKCON’s gurus are not invested with the prerogative of being the ultimate authority within the institution, rather they are also a servant like all other members of ISKCON. Their service is to give diksa, everyone else can, and are, to one degree or another, giving siksa as a service and they also should be giving siksa as generally diksa is based on siksa. The question could be raised; “If diksa gives the guru some kind of extraordinary position or authority within the institution, and that diksa is based on siksa, that means that anyone who is giving guidance and instruction to others (siksa), would have some type of independent authority by dint of the fact that they’re also giving siksa. If that was the case we would really have anarchy and chaos on a large scale.

So diksa is a service but it should not automatically mean that one doing that service gains independent authority, no, rather they remain a servant under the authority structure of the institution.

Sometimes in our society an authority like a temple president may request a devotee serving in their temple to do a particular service and often the devotee will respond with “Oh I need to check with my guru first”. This type of understanding can severely inhibit the mission of ISKCON and if allowed to flourish could lead to its break up.

If you are employed by a company and are requested to do a particular task it is not that before doing that task you tell your boss “First I have to check is it alright with my dad” You can rest assured you won’t have your job for very long in such a scenario. So does the diksa guru not having ultimate authority mean that their position or role is undermined? Again no, particularly if the diksa gurus keep good communication with all of their relevant ISKCON authorities and vice versa.

As ISKCON moves forward it is vital that all devotees associated with it understand clearly its authority structure. The more of us that don’t understand this will simply increase the risk of ISKCON becoming like reality TV’s shooting stars – short lived and inconsequential.

One thing we likely all share is that such an outcome would not be something we would be fired up having to inform Srila Prabhupada of.

Diary of a Traveling Sadhaka: Chanting from Trutnov (Czech Woodstock) and Prague to the North of England
The "Traveling Parson"

47 Responses to “Vaisnava culture of respect and honour”