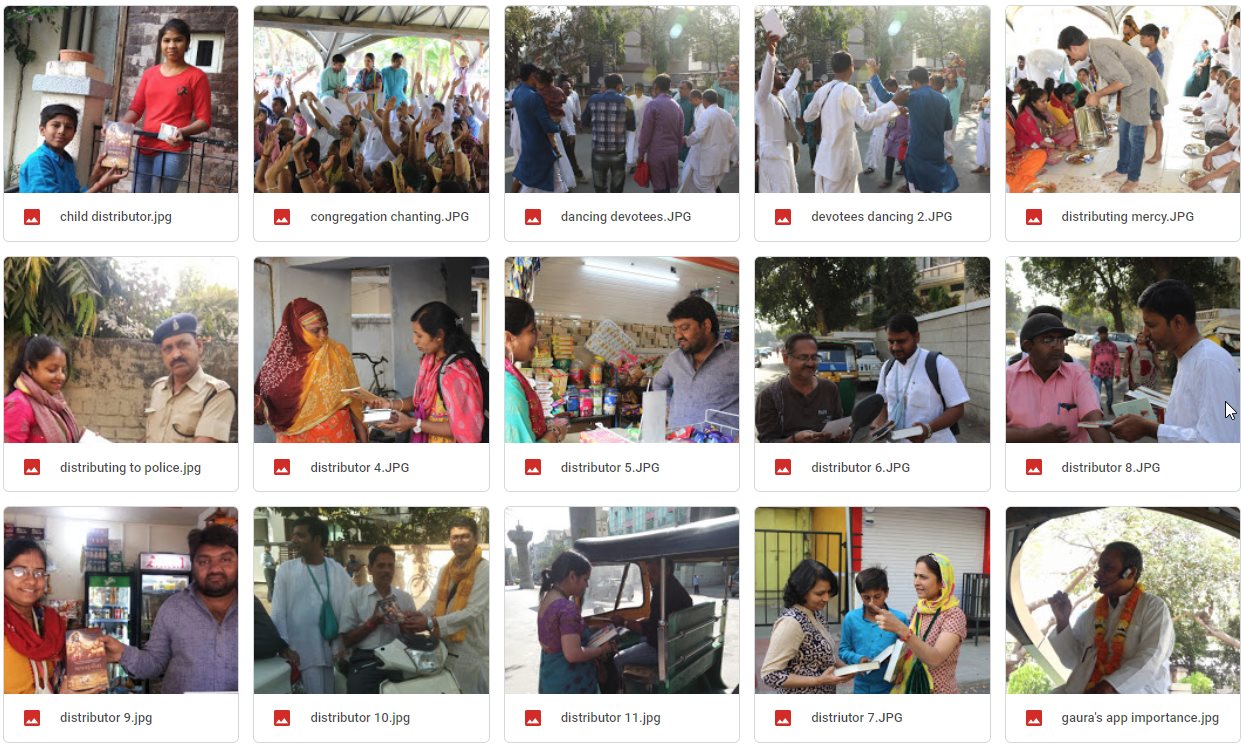 On March 17 the ISKCON Ahmedabad temple devotees conducted their thirty-third monthly one-day padayatra. Called the Glories of Gaura-hari, a shorter walk this time of just 6km, the padayatra was held to promote the glories of Gaura-purnima, the appearance
day of Sri Caitanya Mahaprabhu.

We were going to do padayatra after Gaura-purnima but decided it should come first so that we could advertise the festival. The temple devotees wanted to celebrate Gaura-purnima in as opulent a fashion as Janmashtami, mainly for the benefit of the many
people who don’t know about Lord Caitanya. We thought that by taking padayatra through the various residential areas we could distribute invitation cards announcing Gaura-purnima and encourage everyone to join us at the temple on this auspicious day.

The padayatris gathered at 8am outside Joggers Park, Sarvottam Nagar in Navrangpura to begin walking at 8.30am. More than 100 devotees were present, twenty-five of whom were engaged in distributing Srila Prabhupada’s books, pamphlets, and invitations.
Being a Sunday, many people were here to walk and jog so we entered the park with melodious kirtan, making many joggers raise their hands and chant the holy names. They seemed to think this was a kind of exercise, so they were in loud voice. We then
served ekadasi breakfast prasadam to the devotees before leaving the park.

Our padayatra party was accompanied with kirtan sung by Kuntiputra Arjuna prabhu, who came with his family from Baroda for the event. Along the way we encountered a group of road sweepers filling the air with dust, but when they heard the kirtan they
stopped work and began listening attentively. Slowly the dust settled on the road and the air became clear and pure, and devotees who had been covering their mouths with handkerchiefs were now dancing and chanting loudly in the auspicious atmosphere.
Navrangpura householders welcomed the deities of Srila Prabhupada and Sri Sri Gaura-Nitai as the padayatris invited all to benefit by visiting the temple on Gaura-purnima.

My realization during padayatra

On the walk I was feeling that Lord Caitanya is adbhuta-vadanya, wonderfully munificent; adbhuta-karunya, wonderfully merciful; and adbhuta-audarya, wonderfully magnanimous, and how He showered His mercy upon all animate and inanimate beings. I was thinking
that we jivas (including Lord Brahma) possess fifty qualities, Lord Shiva fifty-five qualities, Lord Vishnu sixty qualities, and Lord Krishna sixty-four qualities, but that Gauranga Mahaprabhu possesses three more qualities than Krishna. Of course,
Mahaprabhu is Krishna Himself, but because He has appeared with the moods of Srimati Radharani, He is adorned with three more qualities – adbhuta-vadanya, adbhuta-karunya, and adbhuta-audarya – which are coming from Radharani. This is Mahaprabhu’s
greatness. I recalled the verse from the Sri Caitanya-caritamrta where Krishna states: radhikara prema-guru, ami-sisya nata sada ama nana nrtya nacaya udbhata: “In loving affairs Radharani is My guru and I am Her disciple. I dance according to the
directions of My guru.”

Padayatra ended at noon at Ishwar Bhavan and the party then returned to Joggers Park where the devotees rested in the garden under the shade of a pavilion. The sweet voice of Revati Preshtha was heard singing kirtan and slowly all the devotees responded
and began clapping their hands. By now the book distribution team was calculating laxmi points and the books score went to sixty-four maha big books, 152 small books and seven Sri Caitanya-caritamrta sets, with one of our congregation devotees taking
twenty-five Bhagavad-gitas on behalf of his son’s first birthday. All glories to Srila Prabhupada’s mission that is spreading the glories of Gauranga Mahaprabhu. For the first time on our one-day padayatras prizes were awarded to the highest scorers.
Finally, a few devotees offered their realizations regarding padayatra.

An ekadasi lunch prasadam for all devotees was then served with many wonderful items. I am very grateful to our congregation kitchen team lead by Madhavamohini devi dasi, Harimurari prabhu, and Padmaradha mataji, who have been selflessly preparing the
Sunday feast in our temple kitchen for more than fourteen years and are always ready to support padayatra with wonderful prasadam. The team is ably assisted by Bhakta Rajesh and his wife Bhaktin Jaishree.
I am also thankful to those devotees who
are giving their time for spreading Srila Prabhupada’s movement and heartily thank all our teams who are endeavouring behind the scenes to make our one-day padayatras successful. Devotees are continually reminding us to plan our next padayatra. How
wonderful this padayatra sankirtan is in keeping all of us together and bonded with love and care. All glories to Srila Prabhupada and Guru-Gauranga.