ISKCON Temple, Jaipur: A Window To The Spiritual World

I have been a regular visitor to the ISKCON Temple in Jaipur, Rajasthan for almost an entire past decade. Rajasthan being my ancestral state, we make
it a point to travel here once at least every year. To say then, that I have a personal affinity for this state, and the Jaipur ISKCON temple wouldn’t be an exaggeration… from being a simple small house many years back, it has been a joy to see the
temple gradually evolve to a relatively bigger premise and stand in line along with some of its more famous contemporaries like Delhi.

During its development, the temple has undergone many a changes as well, the more prominent among them being the coming up of a full fledged guest house for the visiting devotees who wish to stay inside the campus, and the in house Govindas restaurant
which serves pure vegetarian fare – and of course, the grand Sri Sri Giridhari Dauji Mandir made entirely from pink stone and decorated with stained glass work celebrating the various avatars of Lord Krishna which opened up earlier this year. 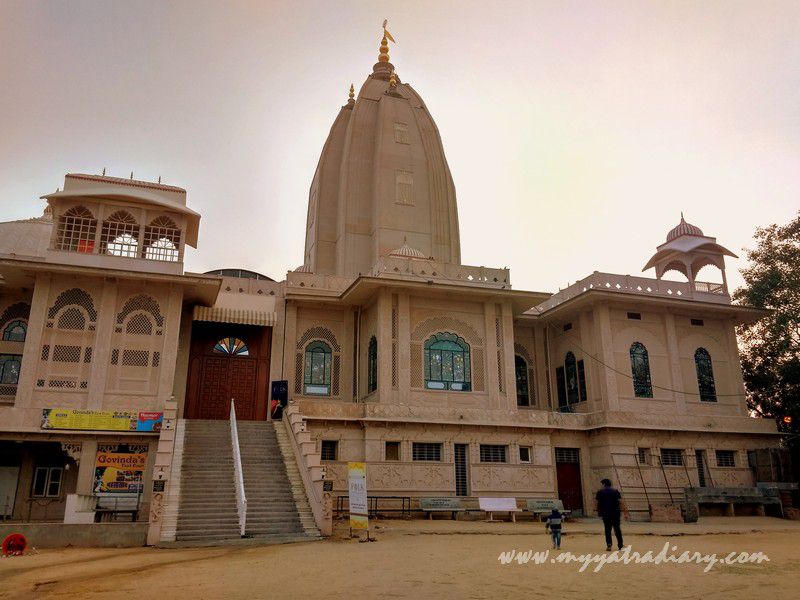 The temple has taken many years to be built… there was a time when I’d see a part of premises as perpetually ‘under construction’ or so I wondered – what exactly was taking the building of the main temple so long?
Little did I know back then, I would be getting my answer in a few years from now, in 2019 and how!
I recall this incidence from around 3 years back… there was an office right below the “under construction” temple site where one could see a foreigner, often alone, deeply immersed with little pieces of colorful glass scattered all around him. Whenever
I passed through his office cum workshop, the room intrigued me, beckoned me. How could it not?! It was an artist’s workshop after all!
Alas, I could never quite give wings to my intrigue by going any nearer or striking a conversation with the person inside but just catching a little glimpse from afar did give me enough to afford this colorful piece of memory today to cherish as my own.
Come January 2019 – and I was in for a beautiful surprise.
The land that I had seen as under construction for so many years long was no longer under construction anymore. What stood on it instead was a magnificent structure resplendent in the glorious art that the Pink city is known for.
After freshening up at the guesthouse just opposite the main temple, I headed to pay my respects and to see the temple, first thing first in the evening and then again the early next morning. 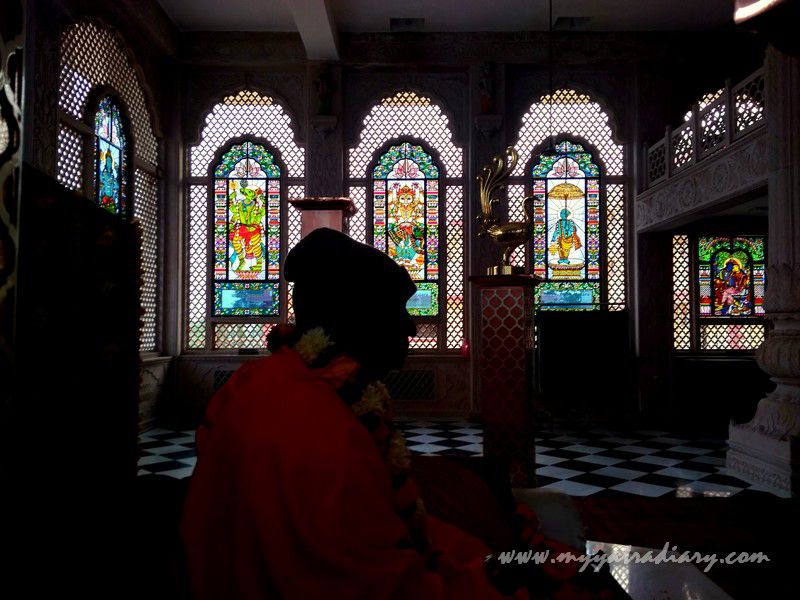 But it was the morning youthful sun that left me enamored. Ascending slowly beyond the horizon, its peeping light sprinkled a sweet golden glow to the structure.
A burst of colors waited inside as I stood and admired agape at the beauty that stared back at me – large windows about 11 feet high and four feet wide with striking stained glass murals integrated within them. A characteristic more commonly observed
in churches and cathedrals, this was the first time I was witnessing glass art of this stature in a temple. 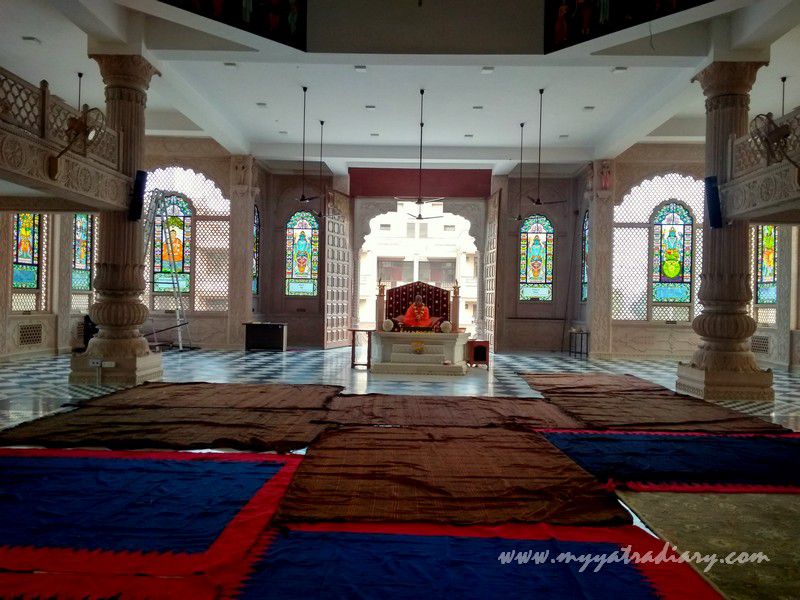 Shafts of sunlight shone through the stained-glass windows, scattering coloured light all over the chequered floor. The windows were a gleaming brilliance against the early morning sun as against the muted tones of the previous evening. As I made my way
around the masterpieces, I gave a silent clap to the Master Artist Mr. Colin Greenwood whose dedication and devotion for many long years was so clearly visible in his exceptional creation in Stained Glass which he had created for the pleasure of His
own Master Srila Prabhupada. What was even more laudable was to see the merger of a vision, a vision of bhakti that Srila Prabhupada once dreamt for all of consciousness, with an art form thereby inspiring people towards not just blindly following
but actually understanding the beauty of Vedic culture through the paintings. 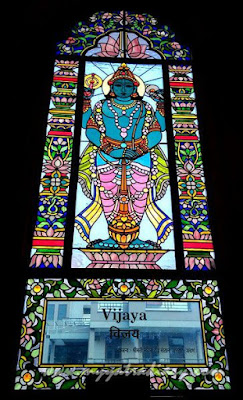 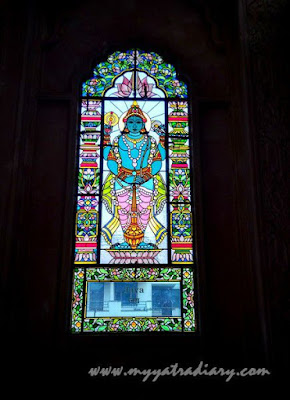 Just upon entering the gate, are the Two Doorkeepers of Vaikuntha, Jaya and Vijay followed by the Dasa Avatars of Lord Vishnu. It was fascinating to know that the glass, lead and other specialized materials used were sourced from Australia and all the work was carried out by locally trained artists under the supervision of Mr. Greenwood. 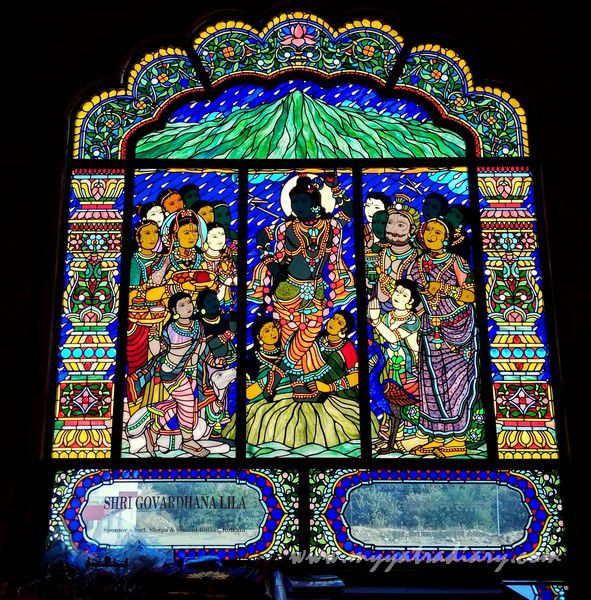 Each window consists of over three thousand pieces of individually cut glass and when seen through the light of the sun, morning as well as evening, literally double up as windows to the Spiritual World!

Walking slowly through the periphery of the temple, I paused at several points, dazzled by the huge colorful windows that soared high towards the distant ceiling. The illustrations took me back to a myriad of stories narrated to me by my grandpa and the
lovely memories I treasure in my heart about the times spent listening to them. 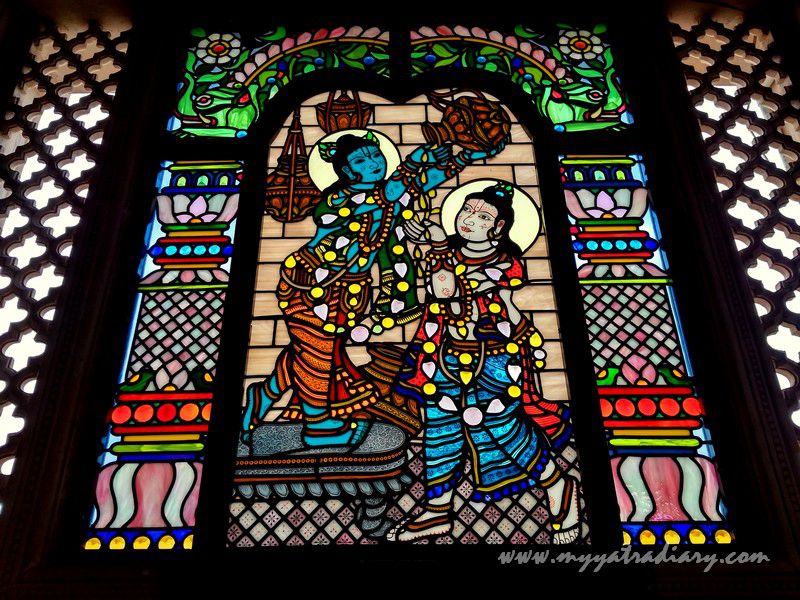 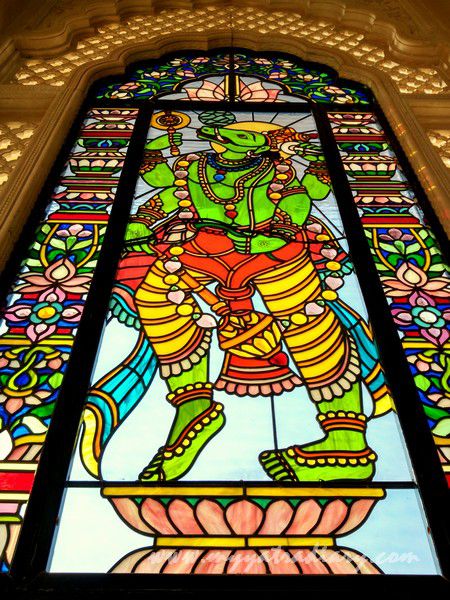 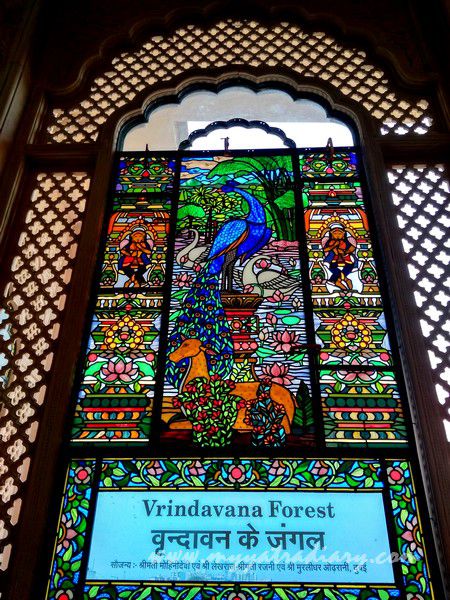 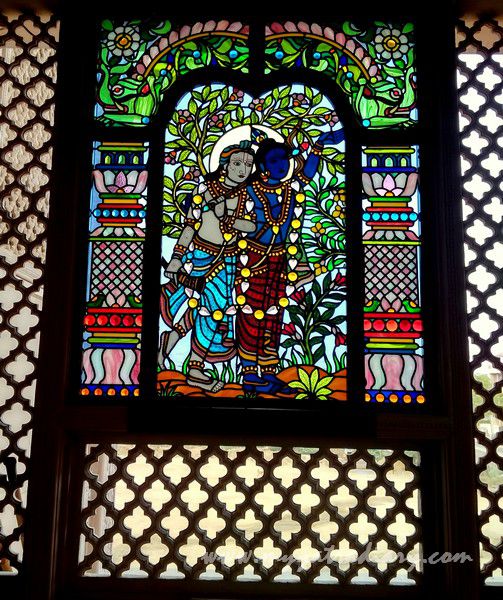 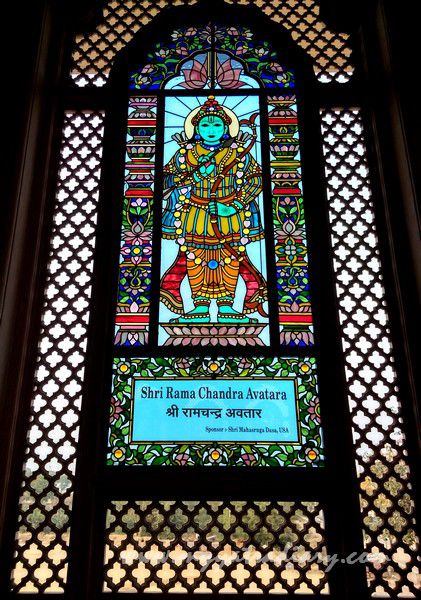 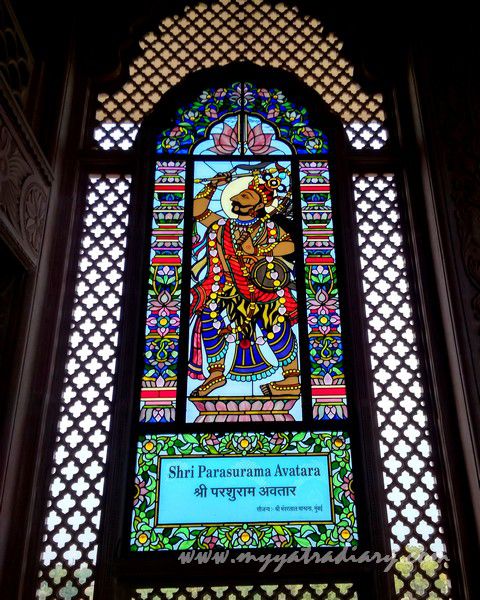 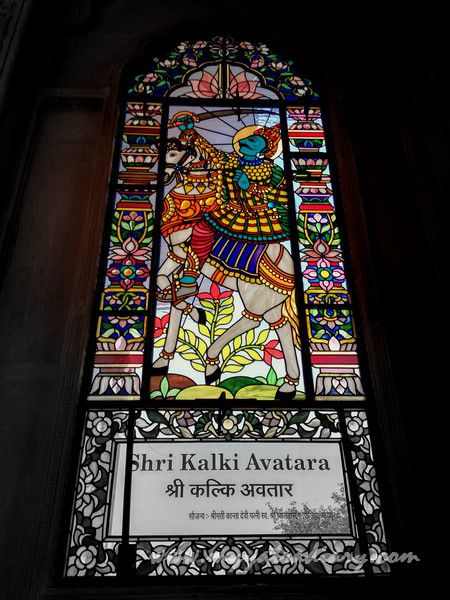 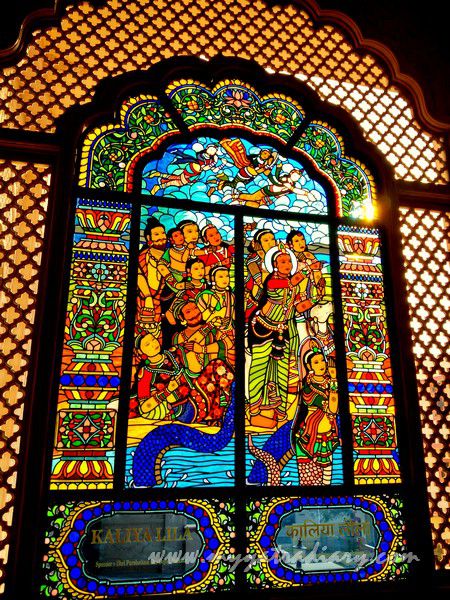 I spent a longer time pausing and admiring the Kaliya Lila window,  but it wasn’t the story that had caught my eye, it was the light… light fell here like a high poised sphere creating a mélange of colors that bounced off the window onto
the silhouetted floor to paint a muddled reflection. 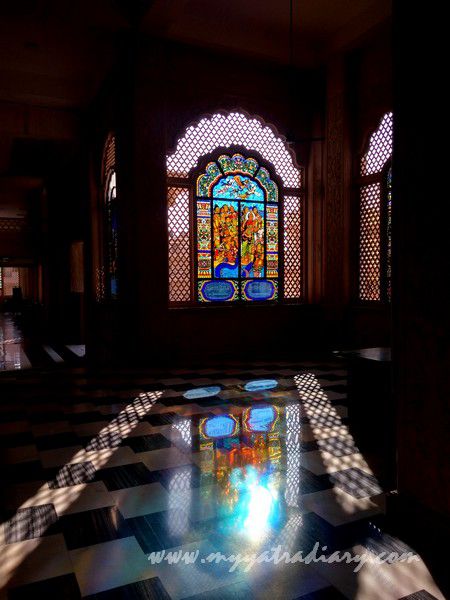 It was a beautiful sight, this moment, how to describe it? Everything seemed to be in perfect balance, harmony and unison: The colorful window shrouded in light suffusing the dark floor in life!
Everything around me seemed to stop for those few moments and turn into something entirely different. The silent space suddenly filled with meaning, and the million colorful beams dissolved into a little bubble of wisdom. Just me and those multi-hooded
dark serpents, the serpents that create mayhem within, had just been blessed with the dancing footprint of the Lord Himself.
Soon, I moved to the center of the hall and spent a few quiet moments kneeling down before the altar, beneath the deep domed ceiling. 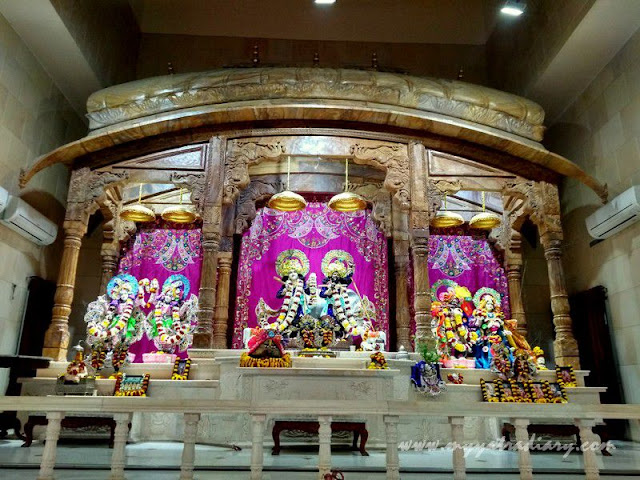 After offering my prayers, as I was walking out of the temple, my eyes fell on the beautiful image of Radha Krishna sitting together on a swing. A beautiful painting dipped in the hues of red, here was love, unadulterated, pure and whole. I thought of
the aura when the light illuminates this part of the gallery: Does it make their love come alive? Would it breathe life in their play? 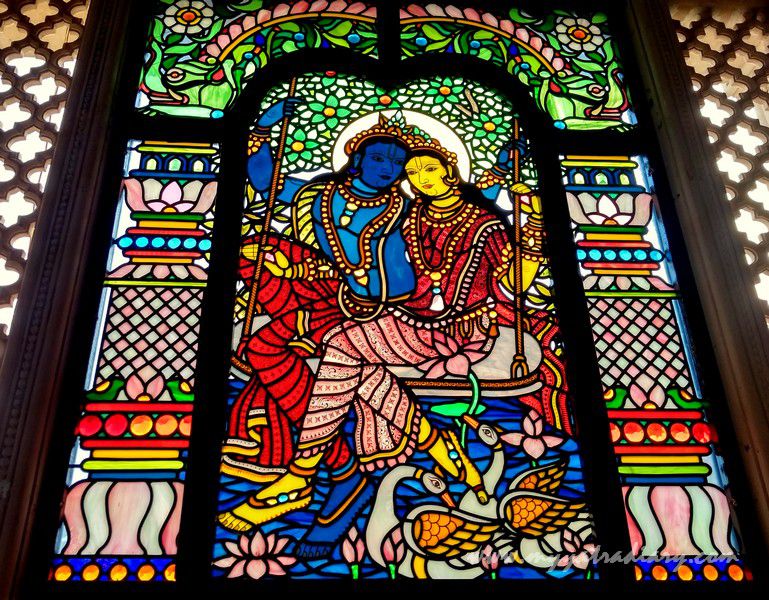