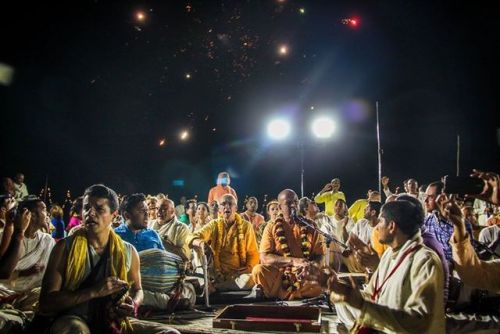 Yamuna Boat Festival (2019) (Album of photos)
Deena Bandhu Das: On 30th March, we did the Yamuna Boat Festival in Vrindavan. An enthusiastic kirtan led the kirtan procession from Krishna Balaram Mandir to the Yamuna. There the large enchanting festival Deities of Radha Shyamasundar boarded Their gorgeously decorated swan boat. Then the Deities sailed up and down the bank of Yamuna giving Their merciful darshan to the huge crowds sitting on the banks. The Deities were serenaded by the ecstatic kirtans of HG Vaiyasaki and later HH BB Govinda Swami. HH Sivaram Swami also joined the festivities on his 70th birthday. 56 Bhoga offering was done while different colored flower petals streamed past the boat. Finally maha aratik was done with a huge ghee lamp with nice fireworks display. Then just to increase the ecstasy, a huge windstorm blew out of west with lightning, thunder, toofan like winds, and eventually rain!

We especially like to thank HG Sacigaursundar Pr who very nicely arranged the whole program even though in the middle of preparations he became bedridden. Our Braja Blessings on him!

Join the ecstatic festival through the pics of my dear Vittalrukmini

A big thanks to all our donors who made it possible!
Find them here: https://is.gd/WDccQe

Thoughts on April Fools’ Day
Exploring Your Word of Honor
Tagged under: Nectar