Rama Navami in Canberra, Australia (Album of photos) The dynasty… 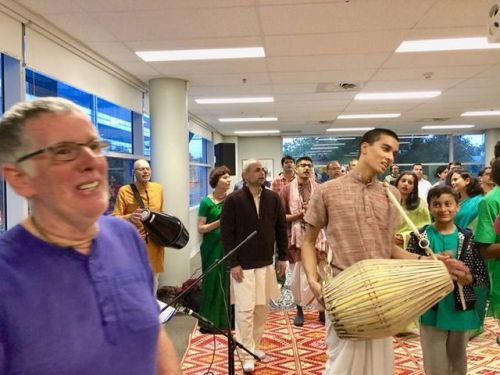 Rama Navami in Canberra, Australia (Album of photos)
The dynasty of Maharaja Raghu is glorified because Lord Ramacandra appeared in that family. Lord Ramacandra appeared in the Iksvaku, or Raghu dynasty. He became King during Treta-yuga, but because of His good government, the age was like Satya-yuga.
Lord Ramacandra exemplifies an incarnation of Godhead who descends for the mission of paritranaya sadhunam vinasaya ca duskrtam – protecting the devotees and destroying the miscreants.
This year, the devotees from Canberra invited me to attend their Rama Navami celebration, which took place in a rented hall down town that gave more space for the function. It was a great program with puspa-abhiseka, kirtan, lecture and feast.
Find them here: https://is.gd/ki9lHz