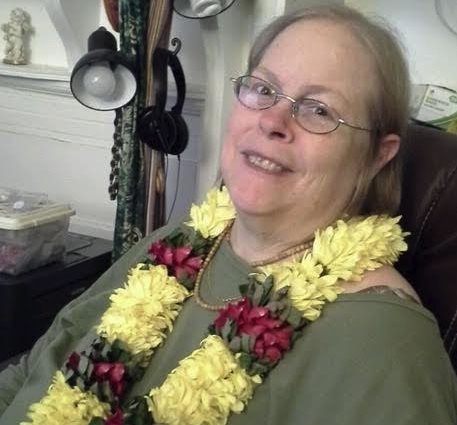 On Sunday, April 21, 2019, Her Grace Savitri devi dasi, a beloved member of our ISKCON Philadelphia Temple peacefully passed away. Surrounded by her closest friends who were chanting the Hare Krishna mantra at her bedside, Savitri departed from this world with a Deity of Lord Nrsimhadeva above her head, a small Deity of Lord Jagannatha and a photo of Srila Prabhupada on her heart, Srila Prabhupada chanting in her ear and a photo of Radha Krsna to her right.

For over 25 years, Savitri faithfully served this community with patience, devotion, and expertise. She is irreplaceable.

Many of you may not be aware that in the past Savitri served as a pujari for Their Lordships Sri Sri Gaura-Nitai. She cooked for the temple devotees daily when they went out on Sankirtan marathons. She helped to organize our first Bhakti-sastri program. As the temple Treasurer for many years, Savitri single-handedly managed the temple finances. She wrote and designed our first temple newsletter in print, and currently has been producing it electronically. She maintained our temple vehicles. She kept neighbor relations. She oversaw temple maintenance, such as the plumbing, electricity, general repairs, snow removal, and had friendly relationships with the people from these companies. Savitri dealt with the details of running our temple such as updating our insurance policies and keeping our bills paid on time. She handled every temple account, such as the Rathayatra account, the construction account, the temple operating account, and so many more. She was the “glue” that kept Lord Jagannatha’s temple running smoothly.

However, Savitri was so much more than all of these services. Savitri devi dasi was a well-educated woman with a Master’s degree in music. She was a concert violinist and expert in classical music. Savitri was also a talented artisan who knew the art of spinning wool, weaving, crocheting, and beading. She made exquisite beaded jewelry, crowns and veils for the Deities. In addition, she was an exceptional cook. Most importantly, Savitri was the kindest of friends, a compassionate soul and a deep, insightful Vaishnavi who dedicated the majority of her life to serving Srila Prabhupada’s mission to spread Krsna consciousness. She was a “Prabhupada Girl” through and through!

Just as she did in life, Savitri devi dasi faced her final moments calmly and fearlessly in a an exemplary manner following in the footsteps of His Divine Grace Srila Prabhupada.

Please join us to honor the life of this wonderful Vaishnavi.