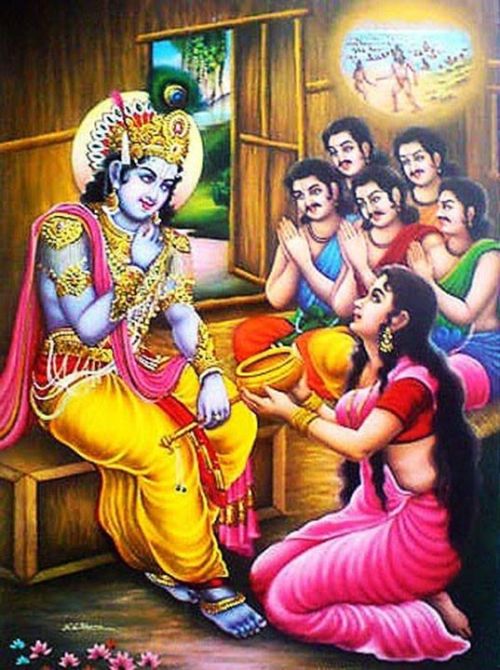 Draupadi’s pot.
Dhirasanta dasa Goswami: The five Pandava princes were heirs to the throne of the world. Duryodhana, their envious cousin, was always scheming how to get rid of them so that he could claim the crown for himself. Killing the Pandavas though, was not so easy, for Lord Krishna was their special friend. And everyone knew that Krishna’s powers were unlimited.

However, by cheating at a gambling match, Duryodhan managed to banish his cousins to the forest for thirteen years. They took with them Draupadi, the devoted and beautiful wife of all five brothers.

To assist the Pandavas during their exile, the Sun God gave Draupadi a special pot as a gift. With it she could always feed her own family as well as an unlimited number of guests. The only rule was that after Draupadi had eaten for that day, the magical pot would produce no more food until the next day. So, even though they were living in the forest, the Pandavas were never hungry.

Duryodhana and his brothers often spied on the Pandavas during their exile in the forest. One day, while camping nearby, Duryodhan was visited by a famous mystic yogi, Durvasa. Durvasa was very quick-tempered. If he ever became angry he would put dreadful curses on people. And if he were pleased, he was quick to offer benedictions as well.

On this particular visit, Durvasa was not alone. He had come with ten thousand disciples. Duryodhana was crafty as well as evil-hearted. So he was exceedingly careful to welcome the great saint with the utmost care and attention. He personally made sure that whenever Durvasa said he was hungry, even in the middle of the night, food was brought to him.

The yogi was obviously pleased with Duryodhan’s service, and after a few days he said, “Ask me for a benediction. I’ll give you whatever you desire.” Duryodhana was elated. This was just what he had hoped would happen. But he didn’t want to let the yogi know that his desire was for something very wicked, so very innocently he said, “You are very kind. The only thing I would like is for my beloved cousins, the Pandavas, to have the pleasure of your company. By good fortune they are staying not far from here. I simply desire that you visit them.”

Durvasa agreed to this simple request. Duryodhana watched as the sage and his ten thousand disciples departed. He chuckled to himself, thinking, “The Pandavas have taken lunch already. Now they’ll never be able to feed Durvasa and all his disciples. I can’t imagine what kind of terrible curse he will cast upon them.”

The eldest Pandava, Yudhishthira, along with his brothers, greeted Durvasa and his men when they reached the camp. It was a shock for the princes to see so many guests. As the entourage walked into the camp, Yudhisthira turned to Draupadi and whispered, “Quick! Get your magic pot so we can offer them something to eat.” “But I have already eaten”, she confessed. “The pot is now empty until tomorrow.”

After exchanging a few polite words with the sage, Yudhisthira requested, “My dear Durvasa, you’ve been walking for so long in the forest. Please go and bathe. When you return, your meal will be waiting for you.” Durvasa and his disciples happily made their way to the river. The Pandavas, meanwhile, were in panic. They knew of Durvasa’s reputation, of how he was so easily upset, and of the power of his curse. Draupadi was in tears. In that condition, she did the only thing she knew could possibly help. From the depths of her heart she called on Lord Krishna. “O Master of the universe, O Lord of the gods, please protect us. Without You we are lost.”

Miraculously, as if from nowhere, Krishna appeared before her. He listened as Draupadi explained the whole situation, but He did not offer a solution. Instead He said, “I am hungry, Draupadi. Would you please bring Me some food?” Bewildered, Draupadi replied, “But I’ve already told You, the pot the Sun God gave me is empty. It won’t yield any more food today. Now I have two problems: I cannot feed You, nor can I feed Durvasa and his men.” Krishna merely smiled. “Don’t worry. Just bring Me the pot.” Still puzzled, Draupadi fetched the pot and Krishna inspected it closely. “Oh, this looks delicious,” Krishna said, having discovered a morsel of vegetable

stuck on the rim. Taking it between His fingers He popped it in His mouth. Then he requested Bheema, the strongest of the Pandava princes to call Durvasa and his men from the river. “Tell them their meal is ready.”

As Bheema approached the riverside he saw Durvasa and the other sages standing waist-deep in the water. They were all doing a very curious thing: they were rubbing their bellies as if they were filled with food. Bheema then heard Durvasa say, “Oh no! Look! Here comes Bheema carrying a club. If we insult him by refusing to eat what Draupadi has prepared, he will be furious. But how can we eat? We’re all feeling completely satisfied. I can’t eat anything, no matter how delicious it is.”

Bheema could hardly believe his eyes and ears. Durvasa’s ten thousand disciples were all saying, “Me too! I can’t even think about eating now.” Then, as Bheema got closer, they all ran into the forest, still wet from their bath, and only half-dressed. Bheema laughed and ran back to tell the other Pandava princes. Much to their relief, the guests never returned.

Draupadi said, “I realize what has happened. If you water the roots of a tree then its other parts – the twigs, leaves, branches, and flowers – are all benefitted. Krishna is like the root of a tree. So when Krishna is satisfied, everyone is satisfied, including Durvasa and his thousands of followers.”

Through Draupadi’s devotion and the kindness of Lord Krishna, the Pandavas were saved from Duryodhana’s evil plans.

Hari is the antidote to worry - How to stop worrying and start living (video)
Lips and Laughter. Many religions describe God as powerful,...
Tagged under: Nectar