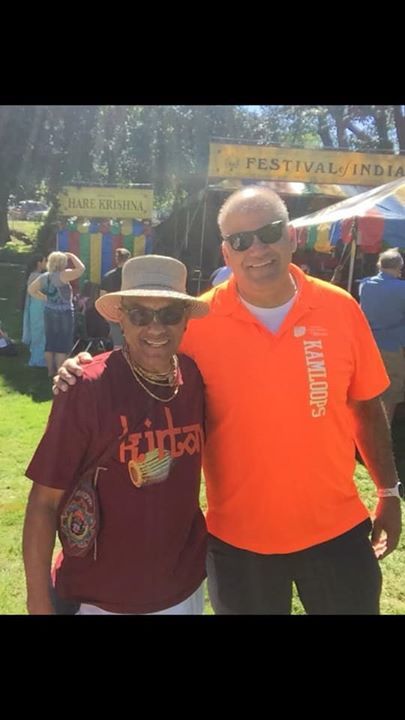 Arjun Singh.
In 1989, I had just returned to Canada from a six-year term in New Delhi, serving there as the temple president. I would walk the halls of McGill University and distribute books to students. One Indian student named Arjun Singh was quite intrigued by my activities and eventually got a book from me.

Fast forward to summer 2017. I was organizing the Festival of India in a large Park in Kamloops, British Columbia, Canada and intended to invite the local mayor. When I got to the mayor’s office, I was ushered in by the receptionist. And who was sitting behind the desk but Arjun Singh.

At first we didn’t recognize each other, but as the conversation went on he said, “Were you distributing books at McGill university in 1989? Hey, aren’t you Kripanidhi from the Hare Krishnas?”

Since then Arjun has always offered help in spreading Lord Caitanya’s sankirtan
movement in this area. All glories to Srila Prabhupada!

Krpanidhi Dasa: In the photo, it’s myself and Arjun at Festival of India summer of 2017

ISKCON and TOVP Leaders Speak About the #Giving TOVP 10 Day Worldwide Matching Fundraiser May 7-17
When it became difficult to call Krishna’s name
Tagged under: Nectar

Please Help us Fix the Roof in New Mayapur!

The miracle of Srila Prabhupada!