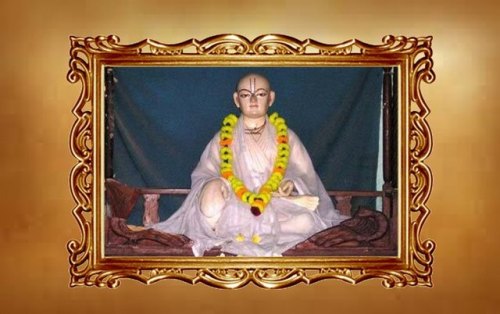 Srivasa’s niece was only four years old. Her name was Narayani. She was just seating peacefully in the corner of the room. Sri Caitanya Mahaprabhu cried out “Narayani! Chant Krsnas name and cry in ecstatic love.” And little Narayani called out “Oh! Krsna, oh! Krsna, oh! Krsna…” and tears just irrupted from her eyes profusely, soaking her body, her limbs trembled and she felt to the ground just crying out “oh! Krsna.” But the devotees saw that they understood the power of Sri Caitanya Mahaprabhu. He gave the ultimate perfection of prema Bhakti to a four-year-old girl by just chanting the name of Krsna. And then Srivas Thakur, he got up, he raised his arms to started dancing and he said “my Lord I give up all fear even when you come as the supreme destroyer of the entire universe and as time personified I see that you are destroying all the fourteen worlds, I will raise my arms fearlessly and chant your Holy Names.” And then Srivas Thakur with all of his servants, maidservants, friends and relatives saw Lord Caitanya Mahaprabhu manifest His Vaikuntha form. And Vrindavan das Thakur explains in this connection ”just see the power of a Vaishnava, any one who serve the Vaishnav, anyone who pleases a Vaishnava become so dear to the Lord. Even the servants and maidservants of Srivas attained the ultimate perfection of seeing the Lord of Vaikuntha before their eyes. This is something that even Brahma, Shiva and the greatest yogis can not see. There is no higher religious principle than becoming dear to the Vaishnavas.”
So this Narayani is the mother of Vrindavan das Thakur. It is said that Srivas Thakurs elder brother Sri Nalina Pandit. And his wife gave birth to Narayani. Lord Caitanya Mahaprabhu would regularly give her the remnants of His food. Sometimes, Lord Caitanya would personally with His own hand feeds this little girl the food that he had eaten. And therefore, a little Narayani became famous throughout the entire Vaishnava society as she who receives the remnants of Lord Caitanya. When she was young, she was married to a great brahmin who came from Srihatta or Silet, his name was Vaikunthanath. She became pregnant. While she was carrying her child, her husband passed away. She was a widow. And the child was born. That illustrious child is Vrindavan das Thakur. Some say he was born in Mamgachi. Some say he was born in Kumar Hatta. Narayani, who was only about fifteen-year-old at the time, she was a young girl and a widow. But in Mamgachi she was given shelter by most compassionate devotee of Sri Caitanya Mahaprabhu, Vasudev Datta. She would take care of Vasudev Datta’s, help him with his deity worship and performed so many nice chores for him. And Vasudev Datta protected and cared for Narayani and especially helped to raised little Vrindavan das.
So Vrindavan das Thakur was in that environment of Srivas Thakur, of Vasudev Datta and all the Vaishnavas. This was the association he was raised in. And it is said that he was the last disciple, was initiated by Nityananda Prabhu. Personal associate of Nityananda Prabhu. And Lord Nityananda prabhu ordered his disciple Vrindavan das Thakur to write the life story of Lord Caitanya Mahaprabhu. So, he took that order as his very life and soul. According to historians, Vaishnavas, Vrindavan das Thakur took birth, I believe it was about four years after Lord Caitanya had already taken Sanyas. And as a young man taking the order of Lord Nityananda prabhu on his head, he went to a place called Dhenur. Dhenur is not very far from Katwa, where Sri Caitanya Mahaprabhu took Sanyas and there he made his Bhajan kutir, his home. And it was there in Dhenur that Vrindavan das Thakur wrote Sri Caitanya Bhagavat.
Watch it here: https://is.gd/O2EvvP

Yatra to Peddaganjam village. If one desires to see the remnants…