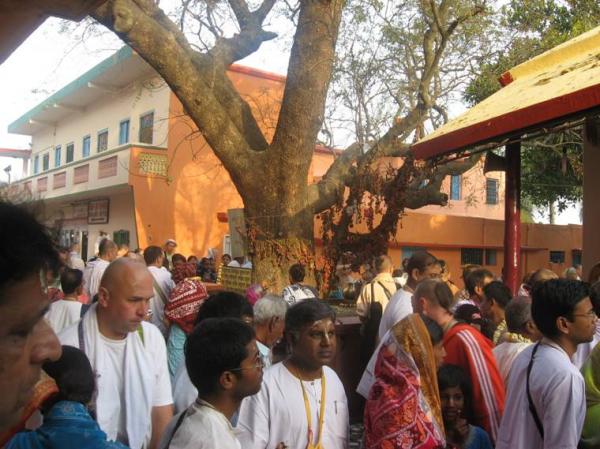 NEEM TREE UNDER WHICH LORD SRI CAITANYA MAHAPRABHU APPEARED IN YEAR 1486. SACHIMATA NAMED HIM ‘NIMAI’ BECAUSE HE WAS BORN UNDER “NEEM” TREE

As a child, Nimai cried a lot and would not stop until everyone sang “HAR! HARI!” and clapped their hands. His golden ankle bells tinkled as He kicked His legs while an Sachimata’s lap and as He took His first faltering steps while learning to walk. Being promised sweets and ksira, the ladies coaxed Nimai to dance for them. That same Supreme Lord who is unapproachable even to great sages and demigods, danced awkwardly on His short chubby legs and smiled sweetly at the ladies as they chanted “HARI” and clapped their hands.

One day two thieves saw the Nimai roaming about the streets alone. Seeing His fine ornaments, they conspired to steal them. One of the thieves picked Him up saying “O dear! O dear!” while the other joined him saying, “Where have You been for so long?”

“Come quickly home, dear,” the thieves said. The Lord smiled and replied, “Yes, let us go home.” Quickly the two thieves left with the Lord in their arms, while the onlookers ignorantly thought that the rightful guardians had taken their child. Thousands of people were on the streets, but they were all strangers to each other. The thieves were happy with themselves and with the ornaments on the child.

Overtaken by greed, the thieves were dreaming of their new found riches, thinking they would surely steal the golden bangles. Keeping the Lord on their shoulders, the thieves went toward hideout, while the child Nimai laughed to Himself while enjoying the ride. One thief passed a sandesa into the Lord’s hand, while the other said comfortingly, “We have almost reached home.”

As the child Nimai was thus being kidnapped, His relatives missed Him and began to search throughout the neighbourhood. “Visvambhara! Come home, Nimai!” they shouted. Everyone grew frantic and restless like fish out of water. At last, everyone became very fearful so that the search became more frantic. In their minds, they began to take shelter of Lord Govinda.

Meanwhile, by the influence of Lord Nimai’s illusory energy, maya, the thieves mistook the way to their hideout. In fact, the deluded thieves came right back in front Sri Jagannatha Misra. The bewildered thieves thought they were in their own house, so they busied themselves trying to remove the Lord’s ornaments.

“Get down now. We are home.” said the thieves, and the Lord replied, “Yes, put Me down.” Inside Sri Jagannatha Misra’s house everyone sat around with their heads in their hands in utter despair. As soon as Nimai was on the ground He ran straight to His father. A joyous uproar shook the house as the relatives loudly chanted, “Hari! Hari!” in great ecstasy. Feeling as if life had returned to their bodies, the people felt indescribable happiness.

The thieves finally realized that the house was not their own, but they could not recognize where they were. Taking advantage of the commotion, the fearful thieves stealthily left the place without being noticed by anyone. Reflecting on the strange and wonderful incident, the thieves thought, “Who is playing tricks with us?”

After reaching a faraway place, the thieves concluded, “Candidevi (goddess Durga) certainly saved us today!” Feeling relieved and happy, they embraced each other. Actually the two thieves gained immeasurable good fortune by carrying the Lord on their shoulders.

Within Jagannatha Misra’s house, the people said, “Who brought the child back? We should offer him nice gifts and tie a turban on his head.” Someone said, “I saw two men come with Nimai. After putting Him down, they left, and I do not know where they went.” Everyone was surprised that whoever brought the child back did not stay to be acknowledged. They turned to Nimai and asked, “Our dear child, tell us who brought You back. We are puzzled.”

The Lord replied, “I went to the banks of the Ganges, but I lost my way home and was roaming about in the town. Two persons took Me in their arms and brought Me home.” “The words of the scriptures are never wrong, The unseen hand of God always protects children, old persons, and the helpless,” they all said. Being bewildered by Yogamaya, the relatives conjectured in many ways.

In this way Lord of Vaikuntha performed His wonderful pastimes. Who can understand them without the Lord’s mercy? Although these narrations are a mystery even to the Vedas, simply by hearing them one can easily achieve undeviating devotion to Lord Caitanya’s lotus feet.

What a miracle!
LORD KRSNA SPORTS WITH HIS QUEENS IN THE WATER

Halting the March of Kali

Tracing Effects To Their Causes