Highlights From The Sacred Sound Kirtan Retreat 2019 in… 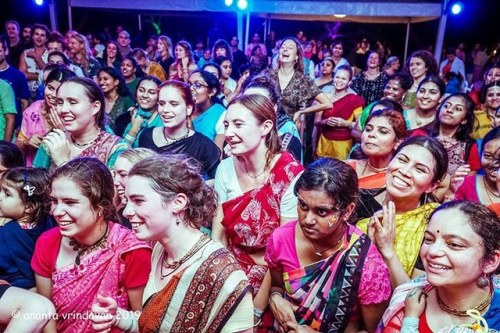 Highlights From The Sacred Sound Kirtan Retreat 2019 in Australia.
Syamala Gopa Kishori devi dasi: This year’s Sacred Sound Kirtan retreat was a great success and we are very grateful to the many kirtaneers, devotees and guests who made it possible. The annual event, which was held during the Easter weekend, drew a crowd of almost 1000 guests, all enthusiastic to share in the nectar of the holy names.
One of the highlights of the retreat was the uplifting kirtanas led by some of ISKCON’s most prominent kirtaneers, including Indradyumna Swami, Bhakti Bhringa Govinda Swami (BB Govinda), Bada Haridas prabhu, Sri Prahlad dasa, Bali and Dhanya Rico and Akincana dasa, among others. These kirtanas had the devotees dancing and chanting with great devotion. Another great memory of the retreat was the illuminating seminars given by BB Govinda Swami on the Brhad Bhagavatamrta.
The retreat hosted a fantastic market, which offered delicious prasadam as well as gifts handcrafted by talented members of the New Govardhana community. In addition, the Krishna Kids area was a welcome treat for children and their parents, who were able to immerse themselves in kirtanas while their little ones engaged in crafts and activities.
Devotees felt spiritually surcharged by this year’s retreat and are eagerly awaiting the 2020 Sacred Sound Kirtan event.