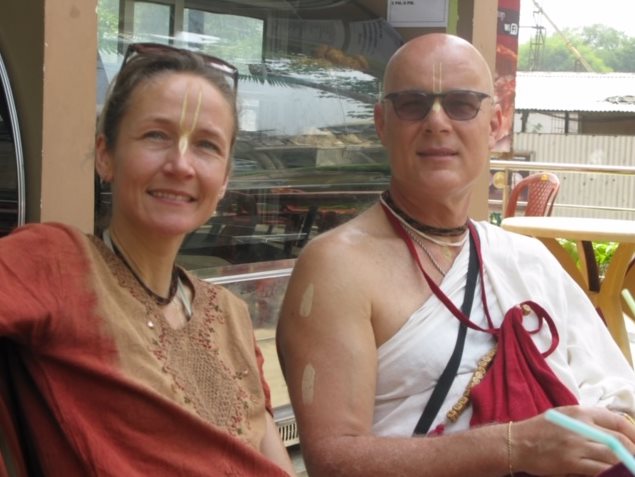 Hari-dhama dasa and Gavesi devi dasi, both disciples of His Holiness Mukunda Goswami, have been conducting spiritual care workshops in India, Sweden and Germany. These workshops look at the care of the dying and elderly, underpinned by knowledge and skills training. It equips the student with the confidence to respond to the needs of the dying and bereaved. Attached are the topics covered in these workshops. For those interested in hosting a workshop at your local temple please write to haridhama@gmail.com
——-

How to care for the elderly, for the dying, and for us

devised, written and conducted by

> What is meant by spirituality?

> What is altered spiritual integrity and how is it expressed?

> What is spiritual pain?

> What is spiritual care, skills and how is it administered?

> What is spiritual need?

> How do I assess spiritual needs?

B. Counselling, Listening and Communication skills:

> The role of self-awareness

> The art of Socratic questioning

> Seven considerations for a good death

> The 5 regrets of the dying

> The 6 stages of loss and dying

> What is loss and bereavement and how do we respond?

> The 10 principles of bereavement

E. Care of the Elderly:

> Person-centred care with dignity and compassion

F. Care of the Self:

> The role of self-awareness

> Being critical – helpful or a hindrance?

> Forgiveness as a cornerstone of wholesome living

· Link between thoughts, feelings and behaviour

· How to evaluate your thoughts

· The role of mindfulness

G. Planning for the future:

> The need of health insurance

> Can I die in Vrndavan or Mayapur?

· The content of each workshop is temple and needs driven

· It contains theory and practice, with a student handbook

· We graciously accept travelling, accommodation and prasadam costs to be borne by the host

· Content is usually generic and not necessarily from the Vaisnava perspective

Hari-dhama dasa was born in South Africa in 1957 where he joined ISKCON in early 1985. In Sep-tember of the same year he completes the translation into Afrikaans of several of Srila Prabhupada’s philosophical writings. By December 1985 he leaves South Africa and his lucrative career as a profes-sional actor for the United Kingdom as a political refugee and starts his careers in the caring profession.

In London he pursues his spiritual journey which eventually brings him into contact with His Holiness Mukunda Goswami who gave him his first initiation in 1996. In the same year Mukunda Goswami sends him to India as its National Communications Director for the centennial birth celebrations of His Divine Grace A.C. Bhaktivedanta Swami Prabhupada. In 2003 Hari-dhama dasa receives his second initiation in Vrndavan, where he lives and serves with his spiritual master.

His Holiness Radhanath Swami invites Hari-dhama dasa in 1997 to spearhead the media and public relations campaign for the opening of the Bhaktivedanta Hospital in Mumbai, where he is also instru-mental in setting-up the hospital’s spiritual care department. During his association with the hospital he also teaches staff communications and spiritual care of the dying patient and bereaved family. In 2001 he works alongside the hospital’s medical staff to alleviate the pain and suffering of those caught up in the Gujarat earthquake.

The Governing Body Commission of ISKCON UK appointed Hari-dhama dasa in 2003 as its National Communications Director – a post he holds for 3 years. In 2010 to 2012 he holds the post of Child Protection Officer for the Hare Krsna temple in central London.

Most of his professional careers in the UK are centred around the care of others, either in hospitals, nursing homes, hospices, and as an emergency medical clinician for the London Ambulance Service, where he currently works. He is also the Hindu chaplain for the St Thomas’ and Guys NHS Hospital Trust. He carries a Doctorate Degree in Palliative Care.

He has been married to Gavesi devi dasi, a Cognitive Behavioural Therapist, for more than 19 years and they have one daughter, Sandhya. Together they run spiritual care workshops in Germany, India, Sweden and next in South Africa and Slovenia.

Gavesi devi dasi joined ISKCON in 1993 in Heidelberg while she was a studying law at University. She took initiation from Harikesh Swami in 1995. Her service had been developing the congregation, helping managing the temple and later she was part of the ISKCON communication team.

In 2000 she moved to England where she started training as a counsellor. She holds a diploma in counselling and postgraduate diploma in cognitive behaviour therapy. During her years of training she had counselling placements at different organisations, from Mind – a mental health charity, Lewisham bereavement service, King’s College hospital, working with inpatients and outpatients, and a secondary school, counselling adolescences.

In 2005 she took a position within the NHS as Primary Care Mental Health Worker and Practice coun-sellor. In 2009 she joined the IAPT (talking therapies) service within the South London and Maudsley Mental Health Trust, providing cognitive behaviour therapy to patients presenting with mild to moder-ate depression and various anxiety disorders. She has undertaken additional training in behavioural couple therapy, hypnotherapy and EMDR (trauma).

In 2007 she took re-initiation from HH Mukunda Goswami. Currently she is running workshops on core therapeutic skills together with her husband Hari-dhama das.