This is a cover story for recent Indian BTG and that would help preaching all over the world. 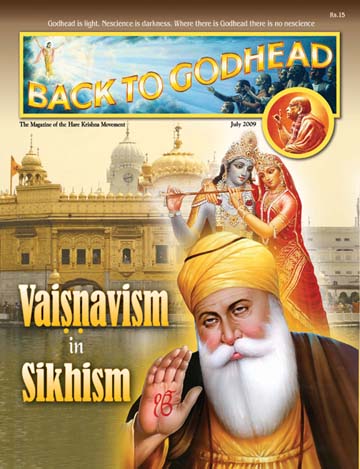 As Arjuna was blessed with “Divya Chaksu” (special eyes to see Krsna) ;Srila Prabhupada blessed me to fathom the depth of scriptures with the special eyes of real knowledge.
For me, accepting Krishna consciousness was not hard, but being in it became a challenge. I am a progeny of Sikh parents and married into a Hindu Punjabi family. My transformation from Randeep Anand to Radhika-kripa Devi Dasi was the most decisive moment of my life. I was quite apprehensive of taking a right path at that crossroad of life. Inspiration, courage, and determination played a vital role.
I had to confront queries, doubts, arguments that were often hit with a view to defy. Not ready to be defeated I stood the trial. I sought a solution which could pacify all, as I was amidst two different so-called man-made faiths. With the mercy of Srila Prabhupada and my spiritual master His Holiness Gopala Krishna Gosvami, I drowned myself into the ocean of scriptures.
I gravely engrossed myself in the study of Sri Guru Granth Sahib (the religious scripture of Sikhs) as well as Bhagavad-gita As It Is. I prayed to Sri Sri Radha Syamasundar to let me derive a conclusion that would satisfy all the rivals. They answered my prayers enlightening me to fathom the depth of both the scriptures. I could now clear most of the doubts and suspicions quite authentically quoting from the scriptures.
Here are some enlightening thoughts and quotes I would like to share that reveal a lot for the common intelligentsia.

The following are mystical lines unraveled from the sacred scripture of the Sikh faith Sri Guru Granth Sahib. This is a compilation of verses sung in the praise of Hari, Govinda, Rama and guru. The scripture recommends the human being to become a “Sikh” (sishya), or a disciple of the spiritual master, in order to attain the shelter of the lotus feet of the Lord. Sri Guru Grantha Sahib is composed in a poetic form in various classical ragas.

Translation:
God is one, realized by the grace of the guru.
Absolute Truth Om is the creator of Brahma.
Brahma kept Om in his heart, in his consciousness.
Absolute Truth is the creator of mountains, eras (yugas).
Absolute Truth is the one from whom Vedasa come.
Omkara is the word that liberates.
Omkara liberates the ones who follow the instruction of their spiritual master.
Om is the word you listen and ponder.
Om is the word—the essence of the three worlds.
Listen O pandita! Why you pen down all worldly deeds
Write only the name of Rama and Gopala attributed by the mercy of guru.

Lord Krishna declares in Bhagavad-gita (7.8), pranavah sarva-vedeshu: “I am syllable om in the Vedic mantras.”

Translation:
After appearing from the lotus stem originating from Vishnu’s naval Brahma cleared his
throat and got absorbed in the Vedas. But he could not fathom the mysteries of the Supreme and was entangled in the cycle of coming and going (birth and death). O my beloved Lord! How can one forget the Supreme on whom all are dependant? The devotees are absorbed in His devotion. The sages, the saints under their guru’s instructions are engrossed in serving the Supreme. Sun, moon and stars all belong to Him and in all the three worlds only Murari is pervading. Only one who follows guru’s instruction is purified but the one who is a mental speculator always wander in darkness.
The lines below quite clearly portray the Supreme Lord leaving nothing to wild imagination.

Translation:
Lord has lotus eyes, speaks sweet words like honey, millions are in His congregation, glorifying Him and Mother Yasoda feeds Him with curd and cooked rice.
Seeing the beauty of most beautiful and listening to the melodious sound of anklets and the waistband, she (Yasoda) captivated by the motherly love plays with Him.
The pen that writes the order of death is in Your hand O Lord!
Tell! Who can escape it? Siva and Brahma with a happy heart learn knowledge and want to meditate upon You.

Rama’s name is the ultimate abode. You are pure wisdom, You are infinite and can take any form. Who can match You?

For the love of Your devotee You disguised to kill Hiranyakasipu with Your nails.

You created the conch, disc, mace, lotus to bind by Your spell. O Infinite Supreme God who can know You ?

You wear yellow clothes, Your teeth look like jasmine buds; You enjoy with Your consort (Srimati Radharani).You wear a long garland and a crown decorated with peacock feathers.

You require no minister to render advice, most patient; You are inaccessible, creator of the whole play O Lovable!

O king of the kings, lovable, Your story cannot be narrated; You are pervading in the three worlds, and You can adopt any form You desire.

Nestled in the Swayyaa Mahalley 4 on page 1402 of the scripture these lines quoted above define and glorify the Supreme Personality of Godhead. The Lord is addressed here as vaha guru.

The meaning of word vaha guru is well put forth by Bhai Gurdasa ji who is a contemporary of the fifth Sikh guru Arjun Dev ji. He is the one who penned down the Granth Sahib while the fifth guru recited it.
Bhai Gurdasa has authored a book called ‘Vaara’ where he elaborates on the compilation of the mantra vaha guru.
In his book in the section of 1 Varaa, Pauri 49 he says:

Translation:
The name of Rama is the treasure; in the wisdom of the guru keep it in mind
Live as a servant of His (Rama’s) servants, and kill the poison of false ego from within. Thus you will win the wealth of life and never face defeat
Nanak says, “Those deeply blessed are greater than the great and who in wisdom of the spiritual master enjoy the nectar of Hari.”

Recite Govinda Govinda Govinda, one gains purity and radiance…
All join together to chant Hari’s (Krishna’s) name and Hare (His internal potency) as this would lead to the forgiveness of the past sins.

Translation:
Only some are fortunate enough to be blessed by the spiritual master with the name of Hari Hari Hari Hari as this is the only name.
By chanting this, the false ego, worldly ties and bad qualities get cleansed…Let us all chant Hrishikesa (one of the many names of Krishna) and Hare (His consort) so as to obtain all rewards.

Vaishnava
A Vaishnava has the topmost human consciousness as described in the scriptures. Same has been advocated in the Granth Sahib. In the 9th verse (Astapati) of a hymn Sukhmani Sahib composed by Guru Arjun Dev, the word vaishnava has been well defined: “who is bound to attain parama gati, the highest destination.”

Translation:
A vaishnava is the one whose tongue does not touch falsity.
In mind who loves the Lord and longs for His glimpse.
Whose eyes don’t see the beauty of other women.
Who serves the saints and remains in their association.
Who doesn’t do or listen to any criticism.
By the grace of the spiritual master he is able to remove the covering of illusion.
Lust leaves his mind as he conquers his senses and saves oneself from those five enemies (the senses).
Nanak says, “One among millions is such a detached soul”.
Such a Vaishnava is the one with whom the Lord is pleased.

He is untouched by the worldliness created by the Lord .
He acts without any worldly motive.
Vaishnava religion is purity.
He works with no aspiration for fruits.
He is engrossed in devotion and kirtana of the Supreme.
In his mind and body always resides Gopala.
He is compassionate to all.
He himself chants and makes others also to so.
Nanaka says, “Such a Vaishnava attains the holy abode”.

The devotee is engrossed in the Lord’s love—the adorable
He abdicates the company of the wicked.
All doubts vanish from his mind.
He performs puja (worship) of the Lord .
In the association of saints he washes the dirt of his sins.
On such a devotee, the wisdom shall reign.
He always serves the Lord .
He surrenders his mind, body at the altar of the love of Vishnu.
He adorns Hari’s lotus feet in his heart.
Nanaka says, “Such a devotee is blessed to meet the Lord”.

These revelations put at rest all the antagonistic sentiments; instilling thus a novel, innovative approach. Vaishnavism is no wonder the language of Sikhism. Such literary endeavors build up bridges and break walls leading to communal harmony resulting in peace and universal brotherhood, with no doubt the core being Krishna consciousness.

The Enemy Never Sleeps
I Just Want the Truth

4 Comments to “ Vaisnavism in Sikhism”