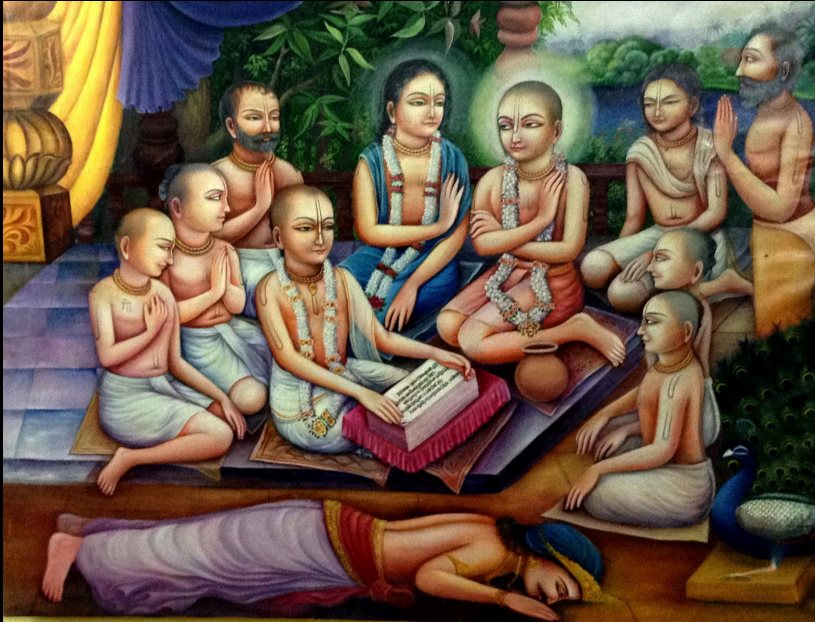 “As taught by Srila Prabhupada, the etiquette of not initiating in the presence of one’s diksa-guru will be upheld in ISKCON. However, Srila Prabhupada and historical precedents also teach us that disciples may sometimes initiate in the physical presence of their diksa-gurus, if so directed by them. In such a case, the disciple should go through the normal procedure for commencing the service of diksa-guru (7.4.1).

ISKCON Law 7.3.2 is amended to read as follows:

As taught by Srila Prabhupada, the etiquette of not initiating in the presence of one’s diksa-guru will be upheld in ISKCON. However historical precedents also teach us that disciples may sometimes, in exceptional cases, initiate in the physical presence of their diksa-gurus.

The GBC clarifies that an individual devotee taking up the service of diksa-guru in the physical presence of their guru may be allowed as an exception when the following conditions are met. The Guru Services Committee will confirm that the candidate for becoming a second generation guru has met all these conditions:

1. The candidate must have been practicing Krishna consciousness for not less than 25 years

2. The candidate’s diksa-guru has affirmed in writing to the GBC Body that he agrees the candidate is suitable for this service and that he gives his blessings

4. All standard procedures for commencing the service of diksa-guru according to ISKCON law, including required training and other conditions, as well as additional appropriate training from diksa- and/or siksa- gurus, have been met.

5. Final acceptance of the candidate to begin initiating is affirmed by a ¾ vote of the GBC Body.

Additional Mandatory Condition (may be waived by a ¾ vote of the GBC Body):

• The candidate’s own diksa-guru has to retire completely from accepting disciples, or agree to immediately retire upon acceptance of the candidate to accept his own disciples.

Factors to be considered by the GBC in determining if a waiver may be approved:

• The area in which the candidate will initiate has a substantial number of devotees wanting initiation, and a shortage of gurus to do this service.

• Language barriers extenuate the need for gurus who speak the local language in a specific area(s).

• The currently initiating guru is overburdened with responsibilities.

Optional conditions that may be applied in an individual case, per a 3/4 vote of the GBC:

• When the candidate takes up the service of diksa-guru he will only be able initiate in a specific area(s).

• The number of disciples the new diksa-guru may initiate can be limited by the GBC.

The GBC Guru Services Committee shall develop a more detailed process to implement the above resolution. This process will come for final review by the GBC Body.