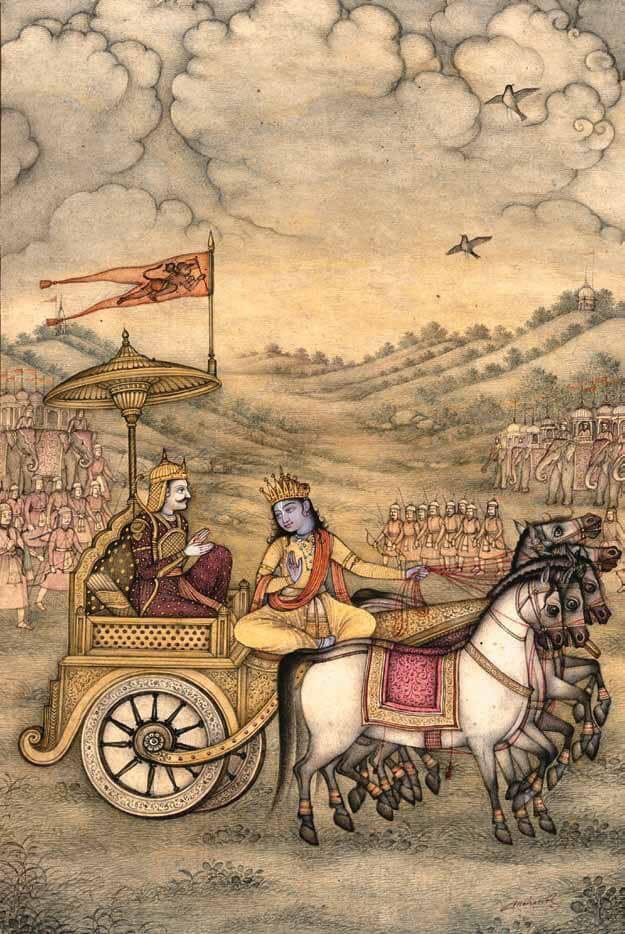 In order for the thesis of this article to be appreciated we will first discuss the underlying context of the scriptures- we might call this the paradigm of Vaishnava teaching.

The devotees of the Lord understand that it is maya’s influence that has spoiled the people and made them demoniac. Thus the inherently noble disposition of the devotees leads them to think only of the demons’ benefit, without a tinge of envy (RTW 1.3).

Genuine spiritual teachers are friends to everyone, they do not see anyone as an enemy; rather, the enemy is the illusory energy. To act on this platform, one must understand that the spirit soul can never possess material qualities. It simply contacts matter and carries it like air carries earthly aromas.

An overly materialistic person may react to the sharp words of the scriptures in two erroneous ways. Rather than allowing their false ego to be severed, they may see the words as an insult(criticism) to their illusory self- and reject them. Or they may see others as comprised of material qualities and use the scripture as a tool for material criticism. In this case, self-righteousness and all sorts of biases are imbedded in one’s understanding. Such people fail to be transparent when describing Krishna Consciousness.

I have a glimpse of the soul and have accepted Krishna Consciousness; still as a neophyte I possess some of errors described above; however, I know they will gradually be diminished by the Krishna’s mercy. There is hardly a devotee who can immediately, and completely, digest all the sharp words they encounter in the scriptures. Until we have done this it is not possible to see ourselves and others equally; in other words, our preaching may contain some subjectivity. The pivotal point is, we cannot rise to the level of perfection without beginning to preach in our imperfect state. It is the duty of all followers of Srila Prabhupada to preach. Every endeavor is covered by some fault, we cannot renounce our duty because of it.

Preachers may seem bias when they focus their sharp words on certain groups. This may or may not be the case. At any rate, it is justifiable to focus on materialistic leaders because they are often of a demoniac mentality, and they have power to convince the populace that their illusory plans are beneficial. Therefore, in the 1940’s Srila Prabhupada gave a comprehensive analysis of demoniac leaders. Our understanding is tested by our ability to see current events in light of these teachings.

I feel it is extremely important for devotees to be able to see the fallacies in the plans of the current leaders. I humbly request the thoughtful readers to consider the truth to my assertions although I cannot claim to be 100% bias free; and conversely, these truths may be hard to digest.

Because Srila Prabhupada wrote it, he obviously considered it important for us to understand the following, regarding leaders of society.

“Every demon is vainly proud, thinking no one is more intelligent and esteemed than himself. Therefore, the overpowering desires that urge him on to perform various activities are, according to him, ultimately beneficial for human society (RTW 1.3).

One might wonder: why would I emphasize this quote? Do I see material leaders as the enemy? No. Throughout this section, found in a book introducing Krishna Consciousnes, Srila Prabhupada repeatedly describes materialistic leaders as demons. It is up to us to remember the underlying context of Sria Prabhupada’s teachings- illusion is the enemy, not the demons themselves. It is not practical, nor should it be necessary, to qualify this before every analysis. Srila Prabhupada calls out demoniac leaders because they have great influence. We should “scrutinizingly” study and discuss this. The illusions are further described by Srila Prabhupada.

“The grossly materialistic demons are so completely bereft of spiritual knowledge that although at every moment they perceive the transience of the material body, all their activities center on the body (RTW 1.3).

Srila Prabhupada goes on to explain that the materialistic plan-makers therefore become deluded by the theory of evolution and conclude that their bodies, and the entire cosmic body, lacks a soul. This leads to the conclusion that all existence is governed only by laws of physical nature; they are the “be all and end all”. (This is known as scientism- in ISKCON jargon.).

The facts above are pertinent to a current ideal, made popular by academics and politicians. We must save the environment by developing a highly technological world powered by green energy. Respecting the environment is an integral aspect of Krishna Consciousness. Devotees may be led to believe that this popular ideal is laudable; or even equal to spiritual ideals. However, it is grounded in scientism which is the deepest type of illusion- and a characteristic of the demoniac mentality.

Devotees know the environment is controlled by the demigods, in response to the collective karma of humans-under the ultimate direction of Krishna. We do not belligerently deny that physical laws exist, but we refuse to be pushed into accepting the assertion that broad spheres, such as the environment, are controlled exclusively by physical laws. Materialists do not accept the laws of God. They cannot solve environmental problems because they do not know how the system operates.

The second problem is, because they identify with the body, the materialists cannot conceive of a goal beyond sense gratification; but it is not possible to utilize natural resources for extravagant sensual satisfaction without being a burden to the Earth.

Srila Prabhupada wrote: “Therefore, there is no question of an increase in population causing a burden. The earth became overburdened due to dharma-glani, or irregular discharge of the Lord’s desire (Purport SB 3.3.14).

Negative environmental circumstances are caused by this burden (collective karma). At a time when many people were starving the Earth said to King Prithu:

My dear King, the seeds, roots, herbs and grains, which were created by Lord Brahma in the past, are now being used by nondevotees, who are devoid of all spiritual understanding. My dear King, not only are grains and herbs being used by nondevotees, but, as far as I am concerned, I am not being properly maintained. Indeed, I am being neglected by kings who are not punishing these rascals who have turned into thieves by using grains for sense gratification. Consequently I have hidden all these seeds, which were meant for the performance of sacrifice. (SB 4.18.6-7 Translation).

“When there are natural disturbances like blowing cyclones, too much heat or snowfall, and uprooting of trees by hurricanes, it is to be understood that the demoniac population is increasing and so the natural disturbance is also taking place. There are many countries on the globe, even at the present moment, where all these disturbances are current. This is true all over the world. There is insufficient sunshine, and there are always clouds in the sky, snowfall and severe cold. These assure that such places are inhabited by demoniac people who are accustomed to all kinds of forbidden, sinful activity. (SB 3.17.15 Purport.)”

The plan is to use “green energy” to facilitate the billions of sinful activities which take place daily on the Earth. Materialists do not know that no technology can negate the spiritual laws of God. Negative environmental circumstances will result from collective sinful activities regardless of the type of energy used to pursue it. As stated before, you can’t fix a problem, in a complex system, when you do not know how it operates.

On the other hand, when we use natural resources in Krishna’s service (without callously polluting or wasting energy) the Earth is gladdened, and she dissolves any unavoidable negative byproducts of human existence:

“Therefore, although there may be a great increase in population on the surface of the earth, if the people are exactly in line with God consciousness and are not miscreants, such a burden on the earth is a source of pleasure for her.” (Purport SB 3.3.14)

Thus, by expanding the opportunity, for current and future generations, to engage in Krishna Consciousness, ISKCON is doing the most beneficial activities for individual souls, as well the planet. Materialistic people will never understand this. Instead, they perpetually laud the pseudo- selfless plans of materialistic leaders. Srila Prabhupada describes:

In the end, of course, it is inevitably revealed that all his aspirations were illusory and unrealistic. Yet despite this revelation, the demons continue to influence the populace through manipulations and lies. There are no limits to the imagination of these unclean and deluded demons. They pose as self-styled leaders and endlessly worry about the welfare of society. They worry, for example, about where to lodge the people who come to purchase in the marketplace. What they actually think about is how to make foolproof arrangements to secure their own long-lasting enjoyment, along with their children’s, their grandchildren’s, and their great-grandchildren’s enjoyment, up to the final dissolution of the world. But when they experience suffering instead of pleasure, the demons revert to violence against their fellow men to accumulate wealth. Their material desires are insatiable, and so even billions of dollars cannot appease them. (RTW 1.3)”

Srila Prabhupada wrote this while residing in India, 70 years ago. Because of the elemental characteristics of material consciousness, these things were going on then, they are going on now, and will continue perpetually. Regardless of the climate, there is no situation where a conditioned soul is free from the miseries created by bodily change. Despite this, the academics and politicians are not promoting a movement to solve the problems of the changing body; rather they simply produce utopian schemes for sense gratification. It is the “long cherished” overwhelming desire for sense gratification, alone, which compels conditioned souls to believe they can enjoy this world, despite an abundance of observable facts which prove it is impossible. The same thing makes people maintain faith in the plans of godless leaders; although they repeatedly fail. Even if the plans were successful, sense gratification results in nothing but misery.

Devotees should not be fooled by plans of materialistic leaders. Using “green energy” for sinful activities is exploitation- a travesty of genuine respect for the Earth. Respecting nature means using natural resources in Krishna’s service. If leaders advocated this, then only, would their plans have something in common with the ideals of Krishna Consciousness.

[1] To cut something, a sharp instrument is required; and to cut the mind from its attachments, sharp words are often required. The sadhu or teacher shows no mercy in using sharp words to sever the student’s mind from material attractions. (PoY 4). [2] Whoever indulges in praising or criticizing the qualities and behavior of others will quickly become deviated from his own best interest by his entanglement in illusory dualities (SB 11.28.2). The Supreme Personality of Godhead said: One should neither praise nor criticize the conditioned nature and activities of other persons. Rather, one should see this world as simply the combination of material nature and the enjoying souls, all based on the one Absolute Truth(SB 11.21.8)
ISKCON European Communications Conference – Day 3
Celebrity Will Smith’s daughter sings "Govindam Adi Purusham..." (1 min. video)

The Bitter-Sweet Taste of Living Bhagavad-Gita