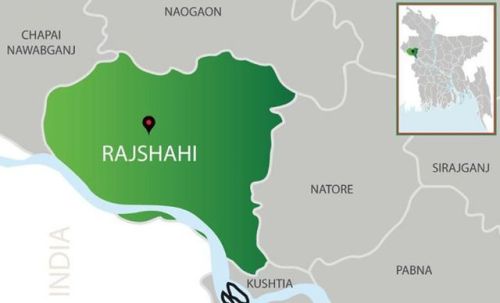 Srimati Gangamata Gosvamini – Appearance.
She was the only daughter of King Naresanarayana of Puntiya in the district of Rajsahi (now in Bangladesh).
During her childhood she was called Saci.
She was endowed with a religious temperament from youth and within a short time Saci became conversant with Vyakarana, Kavya and various scriptures.

When Saci grew up, her beauty and grace charmed everyone.
However, Saci felt no attraction for any man however handsome or wealthy he may be.
Her heart belonged to her Madanagopala.
When she came to know that her parents were concerned about her marriage, Saci very firmly told them that she would never marry a mortal being.
The king and queen were so disturbed by their daughter”s decision that they both passed away, leaving Saci to shoulder the responsibility of running the royal administration. She performed her royal duties for some time, but after a short while she set out on a pilgrimage, leaving the royal administration in the charge of her relatives.

Saci could not find peace of mind anywhere.
Finally in her search for a sat-guru, she came to Puri.
She felt inspired after spending a few days there and then left for Vrndavana.
There Saci had the good fortunate to meet Haridasa Pandita, an ardent devotee of Gaura-Nitai and a disciple of Ananta Acarya.
Saci fell prostrate at the feet of Haridasa and with tears in her eyes prayed for his refuge.

Haridasa tested Saci’s conviction:
“Since it is not possible for a princess to practice bhajana in Vrndavana without relinquishing all worldly possessions, it would be better for you to go back and perform your bhajana at your own house.”
Although Saci understood the significance of Haridasa’s remark, she did not pay and heed to his words and instead, continued performing her bhajana with great renunciation.
Gradually she gave up wearing costly garments and refrained from using any ornaments.

One day Haridasa said to Saci, “If you can give up your sense of pride, dignity, and fear and go out in Vraja with a begging bowl (madhukari), then and then only the divine grace shall be showered upon you.”

Saci was very pleased to hear Haridasa’s advice and from then on went out regularly on madhukari, covering herself with only a tattered garment.
Despite being dressed as vairagi, when she went from door to door in Vraja, her graceful appearance led people to believe that she was not a common woman.
Saci gradually became very thin and looked emaciated.
Nevertheless, she went on with her daily routine; bathing in the Yamuna, cleaning the temple yard, parikrama, attending arati and religious discourses.

Seeing Saci meticulously carrying out his instructions, Haridasa became compassionate towards her.
One day he called Saci before him and said:
“Although you are a princess, your personal sacrifice and devotion to Krsna has pleased me greatly.
You may prepare yourself to receive mantra diksa right now.”

Thus Saci devi was initiated in Radha Krsna mantra from Haridasa on the thirteenth day of the bright fortnight in the month of Chaitra, and thereafter devoted herself fully to the service of guru and Govinda.
Everyday she attended discourses on Gosvami sastra given by Haridasa and listened with rapt attention.
Within a short period of time, to everyone’s pleasure, Sacidevi became thoroughly conversant with Gosvami-siddhanta.

Around that time Laksmipriya, an ardent devotee of Haridasa who was known to regularly chant Harinama three lakhs daily, arrived in Vrndavana.
Under Haridasa’s instructions, Laksmipriya and Sacidevi began regularly practicing bhajana at Radhakunda.
They also performed Govardhana parikrama together daily.
When Haridasa was convinced of Saci’s purity in bhajana and total devotion, he called her one day and instructed her to move to Puridhama to perform her bhajana there and to preach the teachings of Lord Caitanya among the respectable residents of Puri.

By the time she arrived at Puri the majority of Lord Caitanya’s companions had disappeared from the world.
In Puri Saci devi lived and performed her bhajana in the dilapidated house of Sarvabhauma Pandita.
Of all the Deities worshipped during Sarvabhauma’s time only the Damodara saligrama still remained there.

Everyday Sacidevi would recite from Srimad Bhagavatam in the presence of the respectable residents of Puri.
Very shortly she became well-known as an accomplished commentator of Srimad Bhagavatam.

One day Mukunda-deva, the Maharaja of Puri, came to hear Saci devi’s recital from Srimad-Bhagavatam.
He was very impressed by her speaking and felt inspired to offer her something as a token of his appreciation.
That very night Lord Jagannatha appeared to the Maharaja in a dream and commanded him to award Saci devi a site close to Sveta-ganga.
Accordingly, Mukunda-deva met Saci devi the following morning, explained his dream, and requested Saci to accept his humble offering of the land near Sveta-ganga.
At first Saci devi declined, but later, in consideration of the command of Lord Jagannatha, and repeated requests of the Maharaja, Saci devi accepted the offer and the land was eventually turned over to her.

Incidentally, the fact that Saci devi was a princess by birth was generally known to the people of Puri.
Once Saci devi expressed her desire to take a bath in the Ganges on the auspicious day of Varuni.
However, she gave up the idea as it was her guru’s order that she stay at Sriksetra.
That night Lord Jagannatha appeared in her dream and said, “Saci, do not worry, on the day of Varuni you take your bath in Sveta-Ganga, the Ganges will flow to meet you at your bathing place.”

When the auspicious day came Saci devi went out alone at midnight to take a dip in Sveta-Ganga.
As soon as she touched the water, Saci felt herself being swept away by swelling waves, similar to that of the Ganges.
Saci devi was carried along in the current until she finally found herself inside the private restricted bathing place within Lord Jagannatha’s temple premises.
Therein Saci devi saw herself amidst thousands of people of Puri taking bath in great joy while the chanting of hymns filled the air.

Hearing unusual sounds emanating from within the temple, the security staff of the temple woke up.
The Maharaja was informed of the incident and under his order the temple door was opened.
To everyone’s surprise they found the well known reader of Srimad Bhagavatam, Saci devi, standing alone inside the temple.
The sevaka pandas of the temple suspected that she had intended to steal the ornaments of Lord Jagannatha, although some others thought the idea of Saci devi being a thief was incredible .

Very late that night Maharaja Mukunda-deva saw Lord Jagannatha in a dream.
This time the Lord angrily commanded him:
“It is I who brought the Ganges, under My feet, in order to enable Saci to take a bath in the Ganges as she desired.
Go and release Saci immediately.
Also you, along with your priests and pandas, pray at her feet for forgiveness and receive mantra-diksa from her.”

Early the following morning Maharaja took his bath and went to Saci devi.
After releasing her from prison he fell prostrate at her feet, begging for mercy.
He explained his dream to her and sought refuge at her feet.
In compliance with the Lord’s wish, on the next auspicious day Saci devi gave Mukunda, and numerous priests, Radha Krsna mantra diksa.
From that day Saci devi came to be known as Gangamata Gosvamini.

As a token offering to his guru, Maharaja Mukundadeva expressed his desire to donate some land to Gangamata.
At first she declined to accept any material gift, but after repeated humble requests from Mukundadeva, Gangamata had to relent.
She permitted the Maharaja to offer certain items and nothing else; two vessels full of mahaprasada of Lord Jagannatha for the Vaisnavas to relish, one vessel of vegetable, one piece of cloth first offered to the Lord, and 160 paise.
These items were to be sent to the Matha of Gangamata daily after the noon offering.
This custom is still continued today

Gopala Bhavan in Mayapur
The effect of good news
Tagged under: Nectar