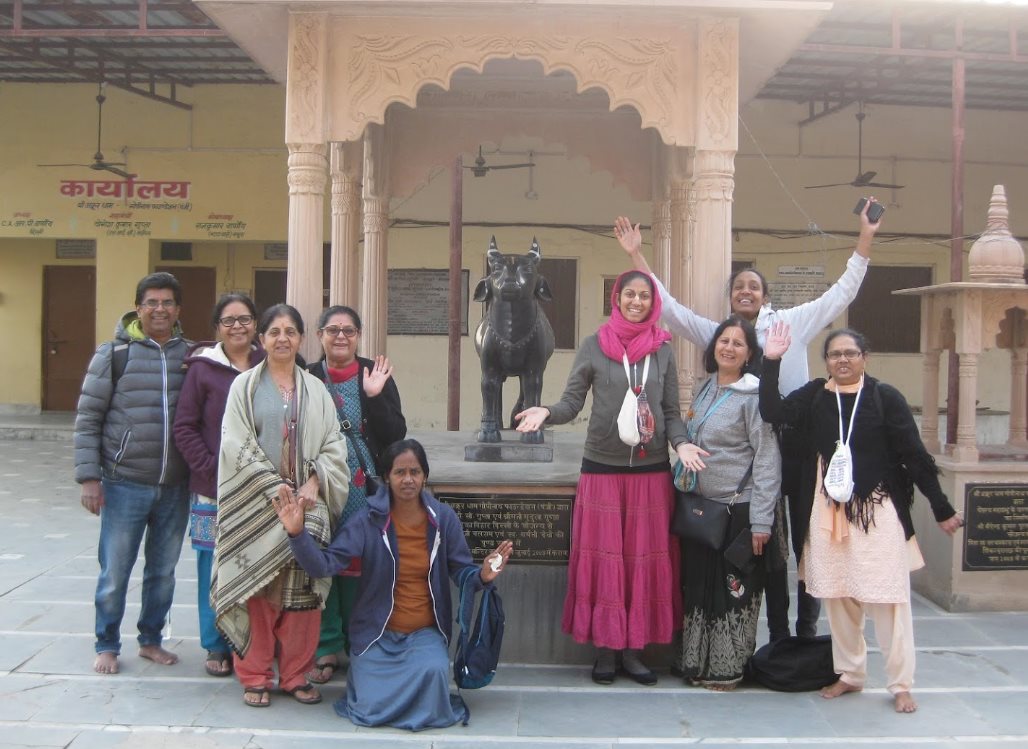 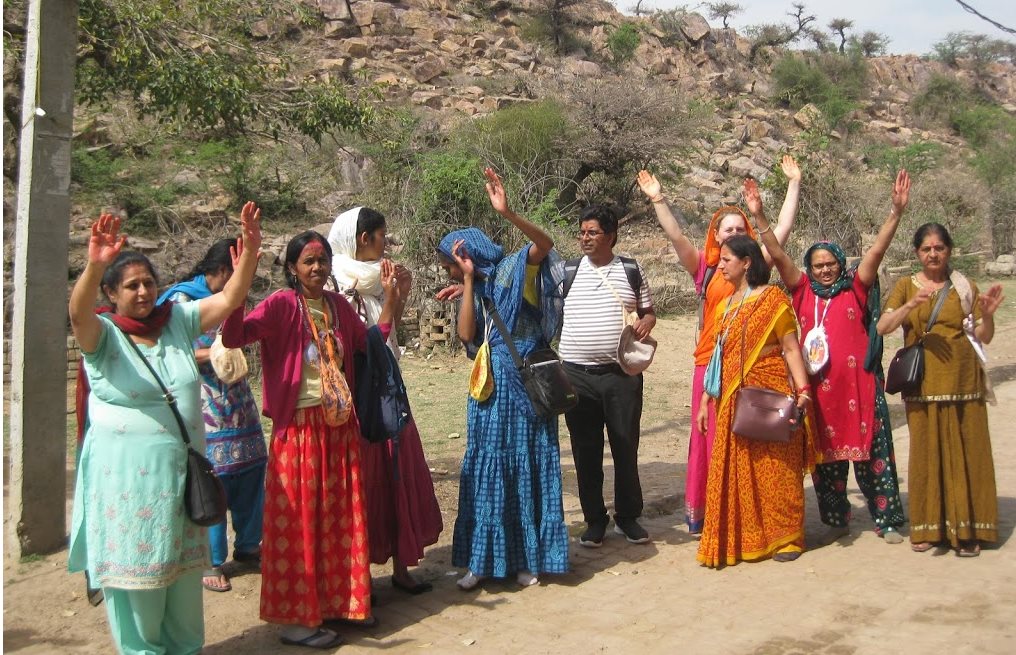 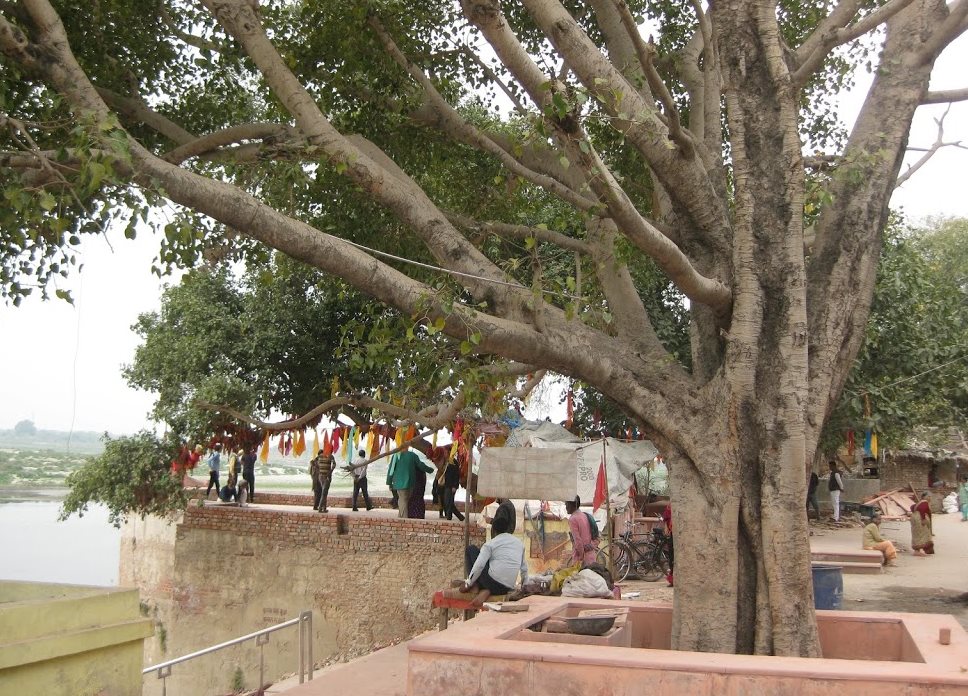 The first ever ISKCON-London India Retreat was organized by Champakalata Priya devi dasi and Bhaktin Aartee who led around 12 devotees on this beautiful journey in March 2019.

On Friday 8th March, the group arrived at Vrindavana around 6.00am. Later that afternoon they visited local temples such as the Radha Madan Mohan Temple, Radha Raman Temple, Radha Gokulananda Temple as well as other places like the Gopal Bhatta Goswami Samadhi, Nidhivan, Kaliya Ghat, Imli Tala, Advaita Vat and finally the Yamuna arati.

On Saturday 9th March, the group organized a ‘seva day’ during which they visited the Sandipani Muni school to distribute ladoos and join 1500 girl students in aarti and kirtan. The team then went to serve meals to sadhus at an ashram that has been running for more than 15 years in Vrindavana.

This was followed by a visit to Citra Shakti in Barsana, Uttar Pradesh – the lovely birthplace of Srimati Radharani. Barsana is around 20km from the Govardhana hill and the Radharani Temple is situated at the top of a small hill with around 200 steps to climb. Following the darshan at the Temple, the group visited the Mor Kutir (small peacock cottage). The story associated with this place talks about Srimati Radharani sitting in seclusion in Her loving anger state, when Lord Krishna came to the place searching for Srimati Radharani and found Her sulking. To pacify Her, Lord Krishna started dancing like a peacock. Srimati Radharani was so fascinated by the peacock dance that She completely forgot Her anger for Lord Krishna and embraced Him. Thus, the place has been named as Mor Kutir.

Continuing their journey on Sunday 10th March, the group visited Akrur Ghat which assumes significance from the fact that Lord Sri Caitanya Mahaprabhu made this His headquarters as long as He was in Vrindavana when He came here from Varanasi. Lord Sri Caitanya Mahaprabhu also took bath in the Yamuna and remained submerged in the water for a long time.

Surrounding this holy ghat, is a lovely Temple of Lord Hanuman and two small water bodies – Mansarovar and Manatowar. The group was blessed to see pictures of Lord Krishna asking for forgiveness from Srimati Radharani because He started the rasa-lila without Her, Lord Krishna and Sudama at Vamsi Vat where Sudama is seen waiting for Lord Krishna to return, Srimati Radharani’s brother taking care of the Lord’s flute and many such serene photos.

The group also saw blissful pictures at Bhandirvan where Lord Krishna and Srimati Radharani are believed to have been married with Lord Brahma performing the wedding ceremony. Later, the group visited the Belvan Laxmi Temple where Goddess Laxmi performs tapasya to enter the rasa-lila past time that took place in the month of Posh. Almost half a million people visit this place and are fed khichdi and sesame ladoo. It is believed that Lord Krishna visited Goddess Laxmi in the form of a baby and She fed khichdi to Him. This was followed by visits to Bhadravan, Bhandirvan, Vamsi Vat, Belvan and later that afternoon they went to local temples including Radha Govinda Temple, Sri Radha Damodar Temple and Seva Kunj. After their visits to the Temple, the devotees went on a boat across the River Yamuna and bathed in the holy waters.

On the following morning of Monday 11th March, the team visited the Kishori Kund in Javat, Srimati Radharani’s in-laws house. As they walked towards Ter Kadamba from Srimati Radharani’s room, they visited the secret passage through which Lord Krishna would sneak in and Srimati Radharani would sneak out. ‘Ter’ means to call, Lord Krishna used to call the cows, gopis and gopas from the Kadamba tree at Ter Kadamba. After visiting the Ter Kadamba, the team moved on to Asheshwar Mahadeva, Nanda Bhavan, Charan phadhi, followed by darshan of the Pavan Sarovar Deities. They took prasadam at Vrinda kund and later shopped around Loi Bazaar to purchase some lovely artefacts.

On Tuesday 12th March, the group left for the Govardhana Parikrama at 6.30am, visited Radha Kund, Kusum Sarovar, took darshan of the Krishna footprint at Gwal Pokar and visited the Mansi Ganga, the Hari Dev Temple and the Surabhi Kund.

The next day, Wednesday 13th March, the group started their journey to visit the holy places of Raval and Dauji in Mathura and went on to visit Gokul where they took darshan of Cintaharan Mahadev, Brahmanda Ghat, Ukhal Bandhan, rolled in the holy Raman Reti and then bathed in the holy waters of the River Yamuna thus ending their beautiful journey in Vrindavana.

The group then traveled to their next destination – Mumbai and arrived early morning on Thursday 14th March. After checking into the lovely Govardhan Ecovillage quarters, the team took afternoon prasadam and later attended a presentation on the significance of the Ayurveda and its massage therapy. Later that evening the group performed the Yamuna aarti.

The following day on Friday 15th March, the team participated in the Govardhan Ecovillage Eco Tour from 10.00am – 12.00pm. Later that afternoon from 4.00pm – 6.00pm they visited some of the rural development areas and skill development units that supported empowerment for women.

On Saturday 16th March, the retreat members performed a yagna and fed bananas to the cows. The following day, Sunday 17th March the team did the Vrindavana parikrama from 10.00am to 12.00pm. The members also had the honour to meet Radhanath Swami and once again participated in the Yamuna aarti that evening. All day on Monday 18th March, the team served in the ‘Food for Life’ kitchen at the Govardhan Ecovillage.

On the last day of the retreat, Tuesday 19th March, the group paid a visit to the Bhaktivedanta Hospital and Research Institute in Thane. There are 200 beds in the hospital, all under specialist care and 1,700 people have been chanting the Maha Mantra since the day the hospital was opened. During their visit, the retreat attendees saw Lord Jagannath’s photo was taken across all the hospital wards so that all patients could offer prayers and flowers. With this the team ended their blissful India Retreat and returned to London.

Here’s some feedback from some of the attendees:
“First of all, I would like to thank Radha Krishna manifesting on you as a guide to my journey I had in mind for many years that came true. You look after all of us the same way and care so much for us, for everything. Organising the trip so beautifully and successfully with devotion and love. I enjoyed each moment, naming each place, everything was awesome as all the places were pastimes of Radha Krishna and the pure love that one can feel each moment. I love all food especially pani puri in the Vrindavana street and Juhu ISKCON Temple. The chai at the dhabha was a great experience. Creating the friendship bond in the trip was special. Oh and the last minute lying down doing the Govardhan parikrama was the start to Krishna dham. I look forward to many more trips like this. Thank you truly and deeply for all your best you did for me and my mum. Mum managed to do all her shopping wherever she went. Radhe Radhe Mataji. Stay blissful and keep smiling.” – Kiran

“Hare Krishna all, I have just arrived home. Thank you very much for all the wonderful memories and time spent with you all. Krishna brought us all together for a reason. Thank you Champakalata Priya Mataji! Thanks to devotee association most of all thank the Lord. Big Haribol everyone.” – Attendee

“Thank you all, amazing to have met you all and this is not the end! Many more laughs to be shared together! so glad to have met each and every one, memories not to be forgotten! Won’t have been the same at all- loved our Yatra grp! Thank you so much Champakalata Priya Mataji for everything, you’re an amazing shining star!” – Attendee

“Hari Hari! It has been a complete joy spending two weeks on a spiritual yatra with strangers who have become great friends. I hope we all continue to imbibe what we have learnt and start to hear ad associate more on this adventure called life! We should have a reunion before Christmas! Champakalata Priya Mataji, you are an excellent organizer and always bent over backwards to facilitate our needs. Certainly, felt sheltered under your care. Thank you!” – Sheila

“I would like to extend my sincere thanks to Champakalata mataji. Suresh, Ishvar, Leela, Suraniya, Sheila, Luchemi, Ashmita and little Anish for making this pilgrimage a wonderful journey of spiritual realization. Hare Krishna and Jai Radhe Radhe. Thanking you all.” – Ravinath

Our next trip will be our first bespoke retreat for families (parents and children) in October 2019. The retreat will take place in Govardhan Ecovillage, an award-winning farm community and retreat centre near Mumbai, India. A wonderful trip for parents’ spiritual nourishment as well as providing children with a fun spiritual adventure they won’t forget!

The Walking Monk passes through Steamboat Springs on his journey across the U.S.