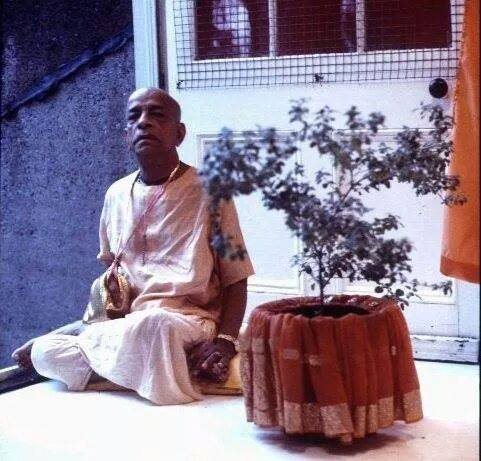 Ekadasi is one of the regular celebrations in the Vaishnava calendar. It is observed eleven days after the full moon and eleven days after the new moon of every month. Even in the thirteenth, or leap month, called adhika-masa, or purusottama-masa, which comes every three years, during which no other festivals are celebrated, Ekadasi is observed. Ekadasi is known as the day of Lord Hari and is said to be the mother of devotion. Keeping the fast on Ekadasi is one of the sixty-four items of devotional service listed in Srila Rupa Gosvami’s Bhakti-rasamrta-sindhu. In fact, it is one of the first ten.

The Nectar of Devotion, Srila Prabhupada’s summary study of Bhakti-rasamrta-sindhu, states, “In the Brahma-vaivarta Purana it is said that one who observes fasting on Ekadasi day is freed from all kinds of reactions to sinful activities and advances in pious life. The basic principle is not just to fast, but to increase one’s faith and love for Govinda, or Krsna. The real reason for observing fasting on Ekadasi is to minimize the demands of the body and to engage our time in the service of the Lord by chanting or performing similar service. The best thing to do on fasting days is to remember the pastimes of Govinda and to hear His holy name constantly.”

Later in The Nectar of Devotion, Srila Prabhupada cites the observance of Ekadasi as a stimulus (uddipana) for ecstatic love: “Some things which give impetus or stimulation to ecstatic love of Krsna are His transcendental qualities, His uncommon activities, His smiling features, His apparel and garlands, His flute, His buffalo horn, His leg bells, His conchshell, His footprints, His places of pastimes (such as Vrndavana), His favorite plant (tulasi), His devotee and the periodical occasions for remembering Him. One such occasion for remembrance is Ekadasi, which comes twice a month on the eleventh day of the moon, both waning and waxing. On that day all the devotees remain fasting throughout the night and continuously chant the glories of the Lord.”

The importance of the Ekadasi fast is also seen in the history of King Ambarisa and the sage Durvasa. Maharaja Ambarisa had observed the fast without even drinking water up until the appointed time to break the fast, called the Ekadasi-parana. Durvasa Muni was to have returned before the time of the parana, and because he was playing the part of a brahman and Ambarisa Maharaja the part of a kshatriya, proper etiquette dictated that Durvasa break the fast first. However, because Durvasa did not come in time, Ambarisa was in a dilemma. If he did not break the fast in time, the whole observance would be spoiled. At the same time, if he did not wait for Durvasa, he would be guilty of an offense, because the etiquette demanded that he wait for the sage to break the fast first. King Ambarisa consulted his advisors, but none could resolve his problem. Finally, the king himself determined the solution: he would take water. Taking water would break the fast and at the same time not break it.

So, Ekadasi is an important observance. Sri Chaitanya Mahaprabhu personally observed Ekadasi, and He ordered all of His followers to do the same. And of all the Ekadasis, Pandava-nirjala Ekadasi, Bhima Ekadasi, is most special.

The story behind this special Ekadasi is recounted in the Brahma Vivarta Purana. Five thousand years ago, during the time of the Mahabharata, Arjuna’s elder brother Bhima admitted that he had great difficulty fasting. (In those days everyone would fast completely from all food and water.) So the Vedic authority Vyasadeva gave Bhima permission to observe the full fast (nirjala, “without water”) only once a year, in the early summer, and to derive the same benefit as if he had observed all the other twenty-three Ekadasis. Thus, devotees who are unable to properly observe Ekadasi during the year, or who by chance happen to miss an Ekadasi, can get the benefit of fully observing all the Ekadasis if they properly observe the Pandava-nirjala Ekadasi. Strictly observed, the fast begins before sunset the evening before Ekadasi and continues until the parana, about the time of sunrise, the morning after Ekadasi. Many devotees try to chant at least sixty-four rounds on Ekadasi, especially the Bhima Ekadasi.

Once, when we were with Srila Prabhupada in Amritsar, Yamuna-devi read to him from the newly published Nectar of Devotion: “Ekadasi, which comes twice a month on the eleventh day of the moon, both waning and waxing. On that day all the devotees remain fasting throughout the night and continuously chant the glories of the Lord.” Then she asked, “Should we also observe Ekadasi like that?”

“No,” Prabhupada replied. “We have too much service to do for Krishna.”

So the basic observance of Ekadasi, as prescribed by Srila Prabhupada, is to refrain from grains and beans and to chant as many rounds as possible. Although most devotees in ISKCON do not perform nirjala on every Ekadasi, many do on Pandava-nirjala Ekadasi. They also try to chant at least sixty-four rounds. And by the mercy of Ekadasi, they make great spiritual advancement: they are blessed by spiritual strength and realization and so continue their service to Sri Chaitanya Mahaprabhu’s mission with renewed vigor—enthusiasm and inspiration.

Yours in service,
Giriraj Swami

Remembering Aindra Prabhu (video)
Work on the Main Dome of the TOVP is almost complete! (Album of...