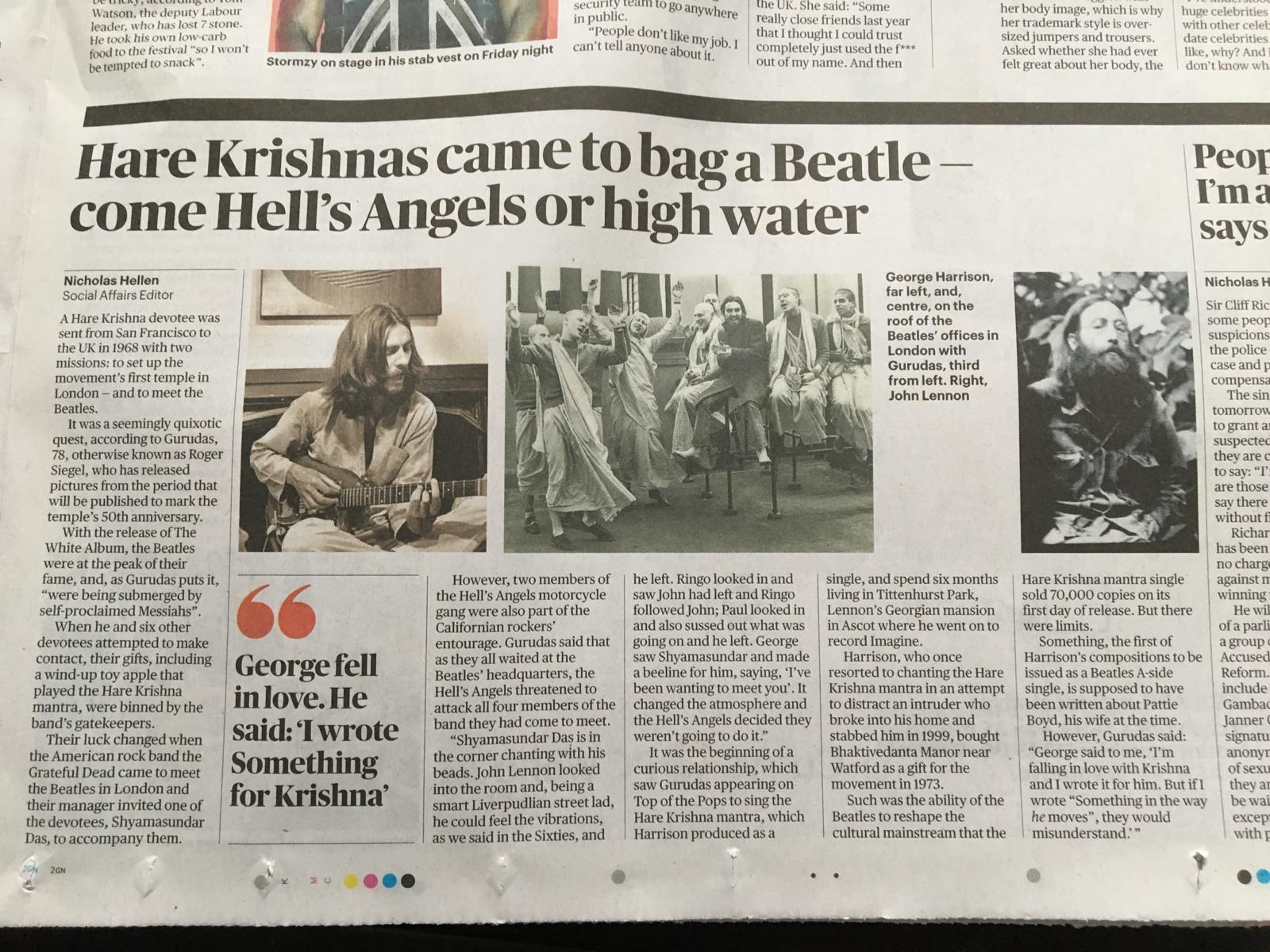 A Hare Krishna devotee was sent from San Francisco to the UK in 1968 with two missions: to set up the movement’s first temple in London – and to meet the Beatles.

It was a seemingly quixotic quest, according to Gurudas, 78, otherwise known as Roger Siegel, who has released pictures from the period that will be published to mark the temple’s 50th anniversary.

With the release of The White Album, the Beatles were at the peak of their fame, and, as Gurudas puts it, “were being submerged by self-proclaimed Messiahs”.

When he and six other devotees attempted to make contact, their gifts, including a wind-up toy apple that played the Hare Krishna mantra, were binned by the band’s gatekeepers.

Their luck changed when the American rock band the Grateful Dead came to meet the Beatles in London and their manager invited one of the devotees, Shyamasundar Das, to accompany them.

“Shyamasundar Das is in the corner chanting with his beads. John Lennon looked into the room and, being a smart Liverpudlian street lad, he could feel the vibrations, as we said in the Sixties, and he left. Ringo looked in and saw John had left and Ringo followed John; Paul looked in and also sussed out what was going on and he left. George saw Shyamasundar and made a beeline for him, saying, ‘I’ve been wanting to meet you’. It changed the atmosphere and the Hell’s Angels decided they weren’t going to do it.”

It was the beginning of a curious relationship, which saw Gurudas appearing on Top of the Pops to sing the Hare Krishna mantra, which Harrison produced as a single, and spend six months living in Tittenhurst Park, Lennon’s Georgian mansion in Ascot where he went on to record Imagine.

Harrison, who once resorted to chanting the Hare Krishna mantra in an attempt to distract an intruder who broke into his home and stabbed him in 1999, bought Bhaktivedanta Manor near Watford as a gift for the movement in 1973.

Such was the ability of the Beatles to reshape the cultural mainstream that the Hare Krishna mantra single sold 70,000 copies on its first day of release. But there were limits.

Something, the first of Harrison’s compositions to be issued as a Beatles A-side single, is supposed to have been written about Pattie Boyd, his wife at the time.

However, Gurudas said: “George said to me, ‘I’m falling in love with Krishna and I wrote it for him. But if I wrote “Something in the way he moves”, they would misunderstand.’ “

Unity Walk celebrates all faiths in remembrance of 9/11

Diwali celebrated with gusto in U.K.