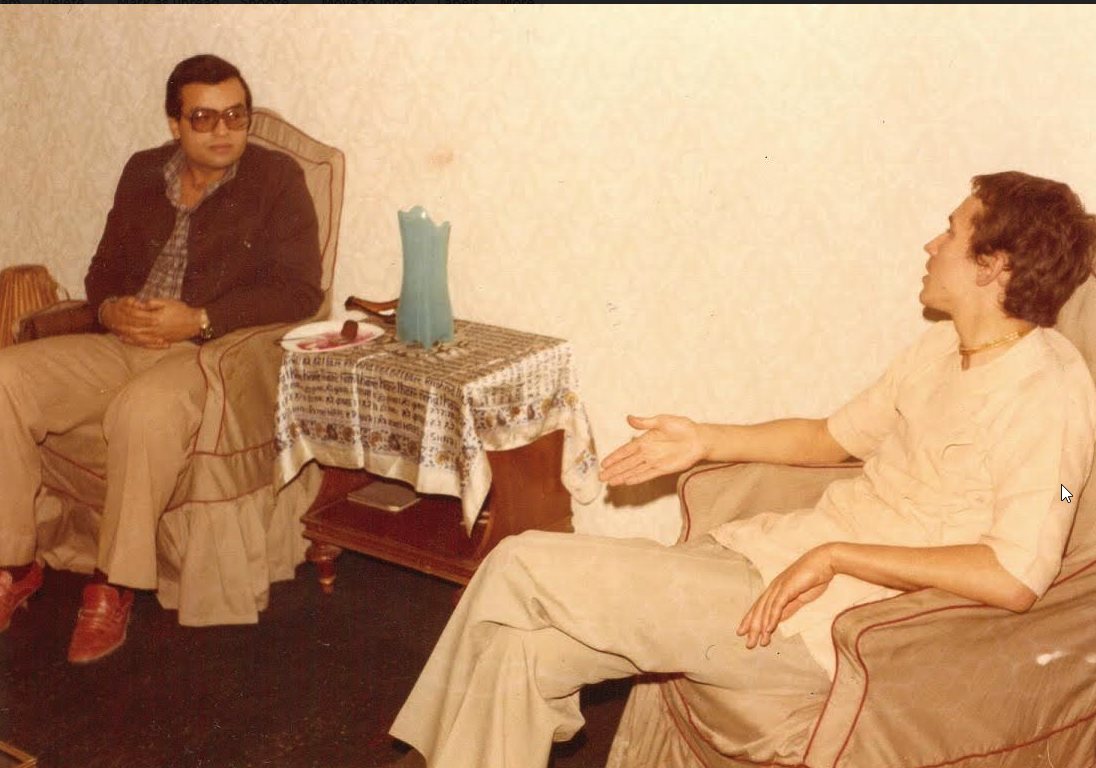 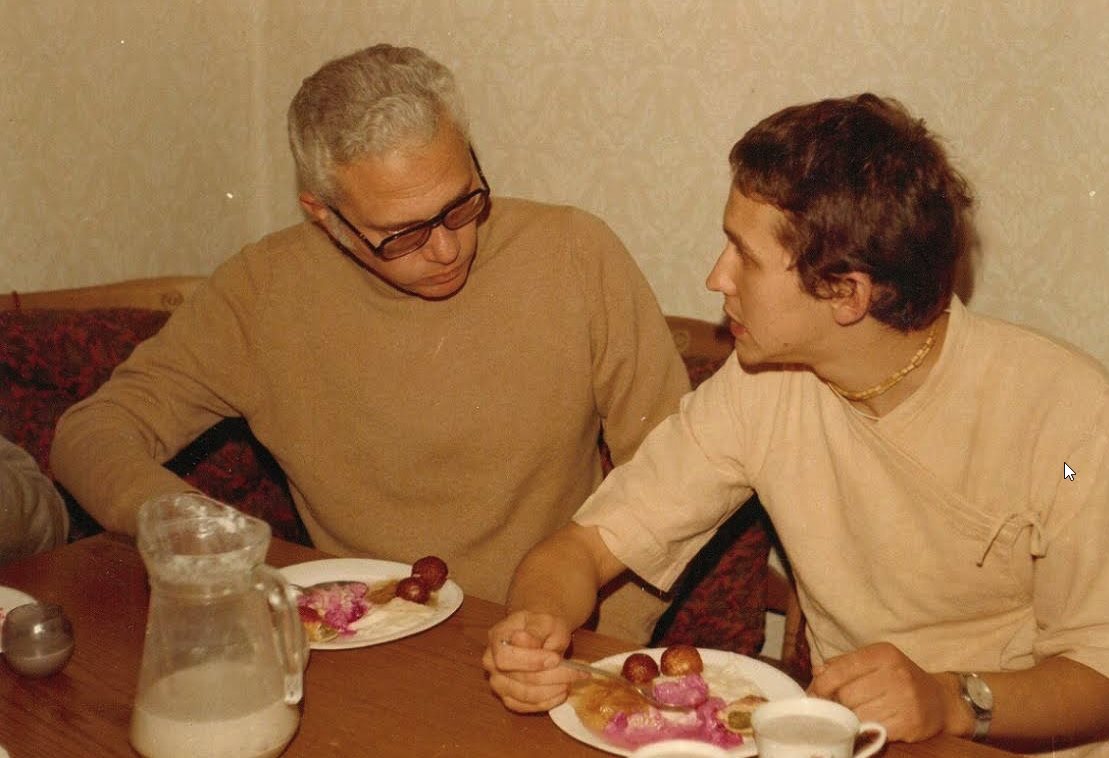 Above: Nikhilananda Prabhu preaching in Cairo 1978 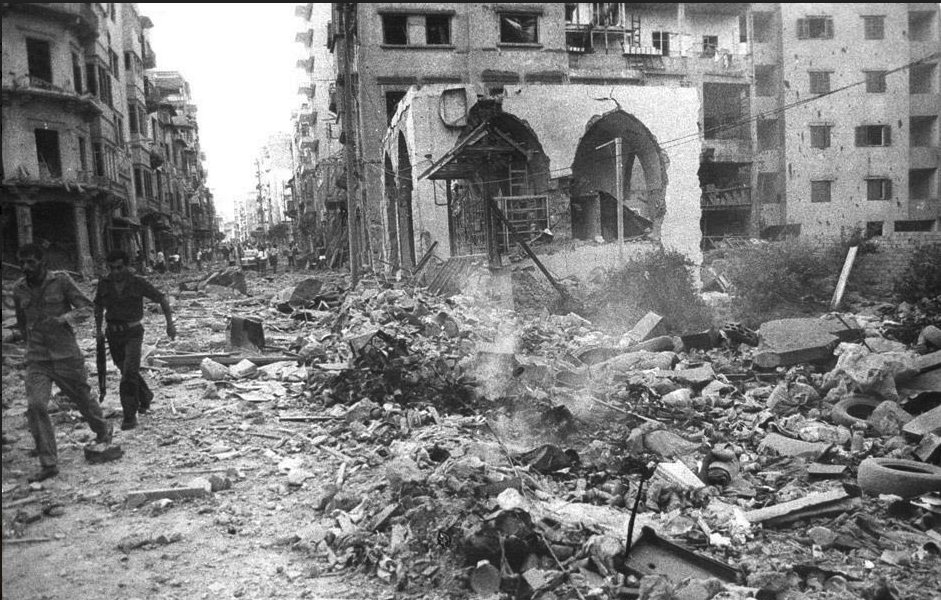 Beirut during the civil war

Padmapani das: Nikhilananda Prabhu is one of the unsung heroes of the Krishna consciousness movement. I had the great privilege of his association in the Middle East in 1978-’79. If I had to describe Nikhilananda in two words, it would be “staunchness personified.” This very serious disciple of Srila Prabhupada began his devotional service at a young age.

Nikhilananda das: After the summer of 1972, during which I had seen Srila Prabhupada in Paris and Amsterdam, I had come to the firm conviction that I wanted to get rid of my long hair and become a regular devotee. I told my mother that I was determined to live in the temple but that I would continue to attend school and visit her regularly. In the end she consented, and I joined the temple in Hamburg. Even my teachers and classmates accepted my new way of life, and I had the opportunity to give lectures on the introduction to Isopanisad and distribute prasadam in school.

In November—I had recently turned fifteen—Cakravarti, the temple president, felt that I was ready for initiation and suggested that I write a letter to Srila Prabhupada. I received the answer in December. Srila Prabhupada was willing to accept me, but he had not yet received Cakravarti’s recommendation and thus wanted to wait. Srila Prabhupada said that he was pleased that I was engaged in translating his books and editing articles for Zuruck zur Gottheit (Back to Godhead magazine in German):

“This is very important work. I need some men to dedicate their lives for publishing these books in all languages of the world. So if you can do this that will be very nice.”

I felt much encouraged by his letter, and it helped me to convince the temple managers to free me from other services and give me more time to translate. Thus I soon moved into the translator’s office, a makeshift shed we had built on the temple’s terrace, where I had the opportunity to work with Vedavyasa and improve my translation technique.

In March of 1973, Srila Prabhupada formally accepted me as his disciple, and it wasn’t long before maya put me to the test. My mother had changed her mind, and one morning two policemen came to escort me back home. I set up an altar at home, and every day I went to the temple right after school to continue the translation work. And on Sundays I took the first train in the morning, to arrive in time for mangala arati. It took me a year to convince my mother again to let me live in the temple.

(From “Srila Prabhupada and His Disciples in Germany” by Vedavyasa das)

Riddha das: In 1978 Tribhuvanatha recruited a fearless and determined group of brahmacaris—Avinashcandra, Nikhilananda, Maha-kratu, and Padmapani—to travel to the Middle East to distribute the just-published Arabic translation of Bhagavad-gita As It Is. While driving from London to Beirut, they were held at knifepoint in Ankara and stranded without money in Istanbul for nine days with a broken-down van. They managed to survive by selling their large stock of “Change of Heart” tapes from shop to shop. Finally they made it to Beirut—in the middle of a civil war.

Padmapani das: I had the good fortune of being Nikhilananda’s sankirtana partner in Lebanon, Jordan and Syria. He was a crack sankirtana devotee who was definitely sent by Lord Chaitanya to distribute those books. We had a competition going to see who could distribute the most books in a day. Nikhilananda almost always edged me out by about ten or twenty books. He would take one side of the street and I’d take the other side. Needless to say, the pressure was on because we didn’t know for how long we’d survive there without getting arrested or even killed, especially in Beirut. Bombs and rockets were flying everywhere.

Riddha das: In Beirut, Srila Prabhupada’s books were much appreciated in the wealthy Christian areas, where it was safe to wander about. Once, though, when the devotees strayed into a Palestinian area, some heavily armed PLO men stopped them, piled onto their car, and ordered them to drive to the PLO command post. The devotees were questioned one by one, but Tribhuvanatha saved the day by convincing the PLO that they were friends of Ravanari, a Palestinian devotee.

In his desire to please Prabhupada, Tribhuvanatha had failed to warn his colleagues of the extremely hazardous nature of their venture. Still, some devotees stayed on in Beirut and risked their lives distributing the Gitas. Those who stayed were all arrested at some point.

Nikhilananda das: It was Tribhuvanatha’s principle to spend all the money he had on preaching, printing books, etc., to make sure it was used for Krishna. So we never had any money. In the beginning we lived in the poorest part of town, with rats in the shower room, next door to an Arab guerrilla base. We were in the midst of bombing, tanks, and machine-gun fighting all the time. In one week, the Syrians, who were involved in Lebanon’s civil war, fired fourteen hundred rockets on a part of town where we had just sold our books.

Every evening some Arab soldiers of various groups raided our flat to see what we were doing. But they would usually put aside their machine guns and sit down with us to sing the maha-mantra. They really liked doing kirtana with us and went wild about it. The only problem was how to stop the kirtana after a few hours without making them angry. We tried to smile all the time. And we depended on Srila Prabhupada.

Padmapani das: Nikhilananada and I were arrested together. A bomb blew up one of the PLO offices near where we were distributing and a van full of heavily armed militiamen arrested all foreigners in the area by gunpoint. They took us to a dilapidated building in the center of Beirut, separated us and led us to the basement where we were each cramped in dirty cells filled with a dozen or so other prisoners. There was no light or ventilation and we didn’t know if it was day or night. Bomb blasts were shaking the ground above us and it was anyone’s guess if we would ever get out alive. But eventually we got lucky, by Krishna’s grace, and one day the guards just opened the doors and let us go.

Riddha das: One time in Beirut during 1978, some devotees, after being held for a week by guerrillas, were released. Tribhuvanatha greeted them on their return. “Alive and well!” he said. He was so relieved. A bright smile wreathed his face.

“Nikhilananda! Padmapani! You’re alive! We thought that you had gone back home, back to Godhead.”

Padmapani das: At that point we decided to travel to Damascus to distribute books since it was too dangerous in Beirut. However, we were challenged there in a different way. Everywhere we went, we were being watched and followed. Thankfully, Nikhilananda was so expert that he drove our van up and down side streets so as to never follow the same route twice. When someone was hot on our trail, Nikhkilananda would speed ahead and then abruptly make a U-turn and fly past the car or van following us. When it became apparent that Damascus was almost as dangerous as Beirut, we moved on to Amman, where things were mellower, thanks I believe to the more open mood there established by King Hussein who had married an American woman known as Queen Noor of Jordan.

After distributing 5,000 Arabic Gitas and thousands of Arabic Isopanisads, Nikhilananda’s duty was done and he returned to Germany, but not before spending some time in our preaching center in Cairo established with the help of Anuttama das.

Riddha das: Nikhilananda summed up the whole experience: “When you’re with devotees like Tribhuvanatha Prabhu, life is very intense and you feel Srila Prabhupada’s presence always.”

Padmapani das: What an adventure! If it wasn’t for Nikhilananda’s hard work and steely determination to please Srila Prabhupada, those books would probably have never been distributed. Nikhilananda had the perfect temperament needed. He was fearless. I consider myself so fortunate to have had Nikhilananda’s association although I’m most unworthy.

Thank you, Nikhilananda Prabhu. All glories to your service. Godspeed on your journey home.

The Life of Jayananda Prabhu