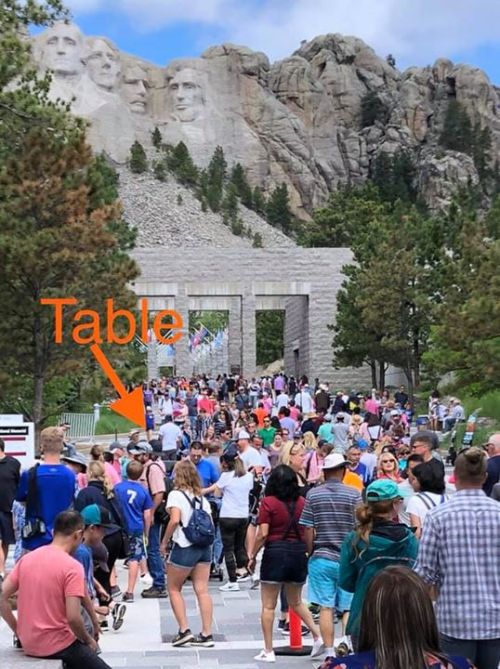 14-DAY BOOK DISTRIBUTION MARATHON AT MT. RUSHMORE (Album of photos)
Danakeli Dasi: With the completion of our first two-week permit for a book table at Mt. Rushmore, we’re happy to report that the results are already better than we were expecting. 3,434 pieces of literature were distributed in 14 days:
.
996 copies of Beyond Birth & Death
880 copies of Chant & Be Happy
800 copies of On Chanting Hare Krishna
204 copies of Bhagavad-gītā As It Is
554 copies of other titles
.
Many nice people took Śrīla Prabhupāda’s books home, but we were too busy to take photos or to document the stories. Some examples, however, are:
.
• a young woman who had never heard of Krishna before but kept having dreams of Him. A psychic told her it was Lord Krishna. When she saw the BG on our table, she said, “That’s Lord Krishna! I’ll take that book!”
• a girl fresh out of high school who said that when people say “Merry Christmas,” she replies “Hare Krishna,” though she doesn’t know how she got into that habit
• an older lady who lost her husband years ago to cancer, then her son in an auto accident, & later her daughter to a disease. She was searching for answers & took a stack of books home.
• a 13-year-old girl, who upon seeing the title Journey of Self-Discovery, said, “I want to learn how this works!”
• a young man just out of high school & traveling to search for truth. He took several books.
• a woman who was supposed to be in TN to attend a meditation seminar but who whimsically decided to visit Mt. Rushmore instead. She took a stack of books.
• two Buddhist monks from Thailand who received Chant & Be Happy
• a local jail inmate on a weekend furlough who took two books
• a spiritually awake, vegetarian couple who retired early in order to travel full time in an RV for the sake of spiritual seeking. They took several books.
• a college-aged girl from Chicago who was traveling by herself in search for a higher purpose & who understood she didn’t bump into our table by chance
.
We were unable to get another permit for the rest of July since several other groups also applied to use the First Amendment Rights areas. But we did secure a two-week permit for Aug. 1. So we’ll take a break, restock titles which we ran out of, & return to Mt. Rushmore soon.
.
All glories to Śrīla Prabhupāda!
Please see the photos and their captions here: https://is.gd/FXoujJ