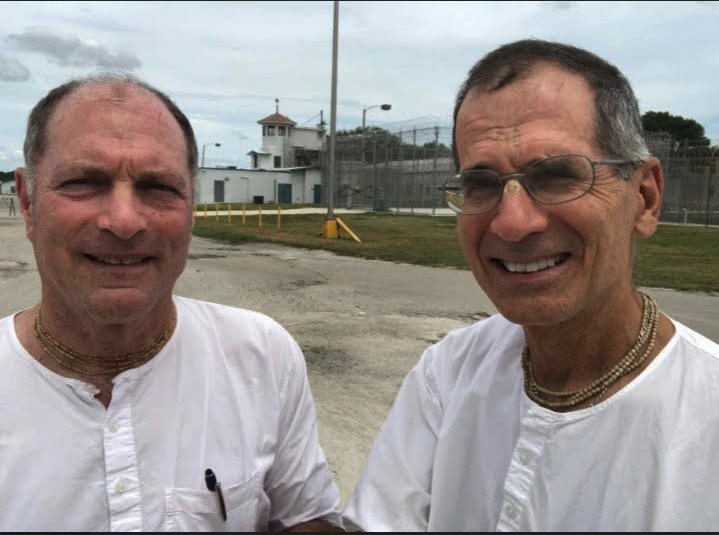 Madan Mohan das (left) and Sarnga Thakur das, with the Raiford prison in the background

We go through three sliding doors (vertical bars) and two locked gates to enter the reception area. When we get to the classroom building, we have to ask the guard in the control room to announce the Hare Krishna Class so that all the different areas can get notified. There are often new guards there and it can take a few times before they pronounce the Holy Names properly. This guard then announces to all the guards in all the cell blocks that the Hare Krishna Class is starting. These guards then broadcast it over their PA systems to all the inmates.

Hundreds of inmates walking by in lines see us chanting and dancing through the windows of our classroom. The class is very interactive. Everyone shares the reading of the verses and purports in the Bhagavad-gita, and they can ask questions or share realizations at any time. This format developed naturally. It’s really engaging, keeping us on our toes, balancing speaking with listening. We come with a basic plan for the class, but we want to follow what Krishna arranges. We try to deliver Krishna consciousness in a manner that is personal and respecting of their dignity, which is a rare thing in their environment.

Recently, it was nice to see Clinton, a new inmate attending the class, really concentrating on chanting japa, his eyes tightly closed.

One of our student, Bhakta Gary W., writes: “My entire experience with Krishna consciousness has been as an incarcerated person. We are most fortunate to be blessed with Krishna’s mercy, Prabhupada’s love and the world of devotees that Prabhupada sent to us.”

Another student states that “Because of these teachings [which he has developed a passion for] I am able to perceive life in a different way. I am able to see myself by way of spiritual knowledge, as spirit soul…. Now that I am hearing about Krishna consciousness I want to know more. Everyone is looking for Krishna. I believe that Krishna is always in control and He has my best interest at heart. If we get to know Krishna, become His devotee, worship Him, and offer our homage unto Him – we will always be in a state of Krishna consciousness, a surrendered soul”.

The student group has really developed an openness to hear and study with us and to share their own realizations, despite their different backgrounds. We can see that over time they have been developing qualities more conducive to devotional life, like tolerance, faith, spiritual vision and humility. The effect of our consistent presence has touched the whole prison in different ways.

As inmate Bhakta Walter W. said, “If you didn’t come, I would run out of gas.”

Now we are the official representatives of the Hindu faith [in that prison]. Sometimes we get an opportunity to explain things to the guards and chaplains, reassuring them that we worship the same one Supreme Lord that they do. And the two Chaplains now seem to be more helpful and friendly.

The guards and the officers know us as the Hare Krishna people of ISKCON. Sometimes they return our greeting of “Hare Krishna”. One Sergeant who has a tough exterior, called out “Hare Krishna!” to us from behind the bars of his office. He was holding on to the bars as if he was the one confined. We made a little comment to him about it pointing out that he was actually free, and then he asked for a cookie (we told him that we’re not allowed to bring them in). But he’s familiar with our prasadam distribution from the University of Florida.

Generally speaking, the many inmates we pass on the way to class will share a friendly greeting with us, or call out “Hare Krishna!” We’ve had a few who wanted to walk with us and get some counseling. It takes about five minutes to get to our classroom, through the halls and the yard outside, and there the inmates also greet us with “Hare Krishna!”

The prison’s religious library—for faiths other than Christianity— now has a full set of Srila Prabhupada’s books. The librarian said they now have a reference computer, and he would like to install the VedaBase on it.

The inmates who assist the Chaplains really extend themselves to help us. They were very eager to put up the eighteen posters we had to advertise Yadubara and Visakha’s movie “Hare Krishna! The Mantra, the Movement and the Swami that Started it All,” that we showed at the prison. At first the Chaplain seemed reluctant to allow us to show the movie, but thanks to the years of goodwill we’ve developed with him and a letter from Yadubara prabhu, he agreed. His staff offered advertising and technical help, including spreading our posters around to all the buildings and even allowing the movie to be shown to the two hundred guys on death row [through a closed video system]. Excitement built up around the showing of the movie. One of the students was concerned that the posters weren’t up yet so he made some of his own, just to make sure it was sufficiently advertised.

The movie was well attended and received. There were a few questions after the movie mostly by the prisoner who was heading up the Jewish inmates. He is quite learned and a medical doctor from Sarasota. His question was,

“Why do you deify your Profit and how can you say God has a form?”

I replied to his question quoting what I heard from Srila Prabhupada. For part of this reply I explained how the ambassador is respected like the king and how authority is required to understand knowledge beyond our senses. Everyone seemed to be pleased. We also continued the discussion afterwards. The kirtan was wonderful as many devotees came with us that day and everyone could feel the mercy.

NOTE: This prison program is following in the footsteps of His Divine Grace Srila Prabhupada, who was challenged by a local government authority to preach Bhagavad Gita to the inmates of Tihar prision in Delhi in 1962 and turn them into ideal characters. Madan Mohan das ACBSP and Sarnga Thakur dasa ACBSP have been carrying on a lively program at the Raiford State prison in Florida. The program was pioneered by Kṛṣṇa Kesava das, Kaliyaphani das and Akuti devi dasi, five years ago, and has carried on continuously ever since.