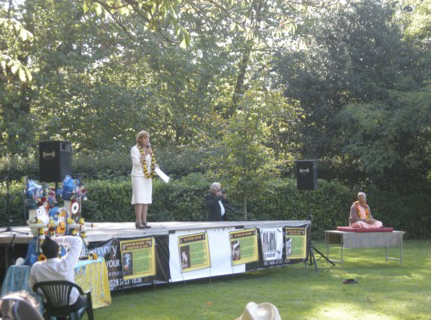 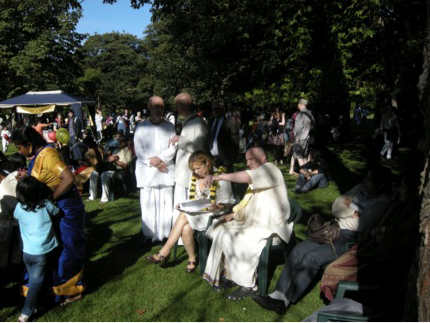 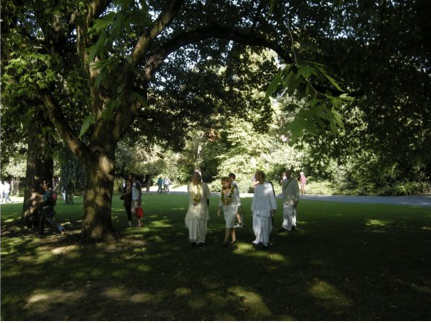 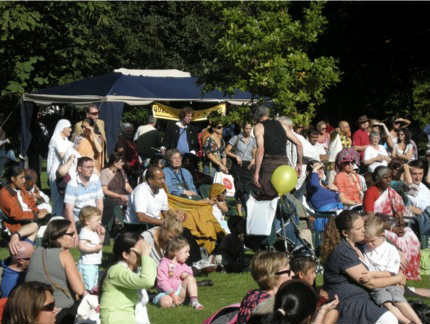 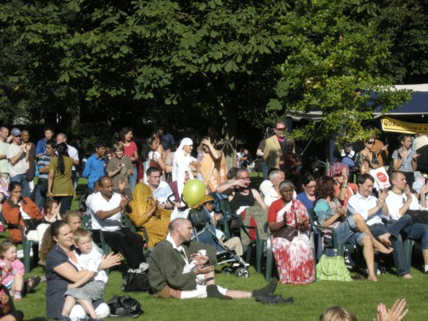 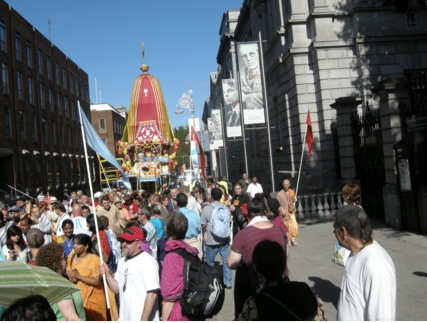 I maybe bending the rules by posting this in the editorial slot but given the previous posting has been there so long I’d thought I take the flak for doing so!

We had a double Rathayatra in Ireland this weekend, Belfast on Saturday and Dublin on Sunday; I would like to give a little report about the Dublin event.

The first thing of note was that for both Rathayatra’s the sun shone and there wasn’t a cloud in the sky from sunrise to sunset. Indeed as I write I am suffering the after effects of forgetting to bring my suntan lotion… Of course for many around the world, having two sunny days in a row at the end of summer is not unusual but trust me, for this little island on the edge of North Western Europe, with the next port of call being North America, it most certainly is. Indeed Saturday and Sunday were undoubtedly the two best days of the summer and surprise surprise the clouds are back with a bang again today.

As the devotees and guests gathered at the starting point (the garden of remembrance) there were lots of happy faces and positive energy. Of course for those directly involved in the organisation and management of the event there were the usual stresses and strains to deal with. Those stresses and strains were massively increased when I got a phone call an hour before take off informing me that the devotee, who is our expert sound man, could not come as his wife had just gone into labour! They now have a happy and healthy 9lb 10ounce daughter – Anasuya dasi, we all thought she was going to be a Subhadra dasi

Anyway back to Sunday and 30 minutes or so before asking a couple of dignitaries to say a few words and then break some coconuts in front of the cart and sweep the road, we had no one to set up the sound, both for the parade but also for the stage show in St. Stephen’s Green, a park a couple of miles away on the other side of the city centre.

As we started to enter panic mode a certain bhakta Mick (I lie not), overheard our jittery discussions and informed us that he was a sound engineer by trade, we decided not to ask for his references but rather gave him full control over everything related to sound, he did not let us down.

So after the speeches and other formalities we started rolling and were soon on Dublin’s main thoroughfare, O’Connell Street. We had pre arranged with the Gardai (police) to stop on O’Connell Bridge for twenty minutes. So for twenty minutes the devotees chanted and danced in ecstasy overlooking the river Liffey with an ever growing number of passersby, not only stopping and looking but also chanting and dancing along in every which way but the swami step!

When we again started to move there were some groans from the crowd so we quickly announced that they are more than welcome to tag along and join in the party at St Stephen’s Green. An hour or so later we arrive at the Green and the park is pretty packed with thousands of sun starved Dubliners taking advantage of the glorious late summer sun. As all the Rathayatra participants made their way into the park along with Jagannatha Baladeva and Subhadra and accompanied by a rip-roaring kirtan, the sun lovers were intrigued to witness such a colourful and joyous event. By the time the Deities took pride of place on the stage, all seats had been taken and the audience were ready for the stage show to commence. The stage and seated areas were nicely circled by various stalls, which were all a buzz with both festival-goers and many of the now curious sun seekers.

Arguably the highlight of the day though was the contribution of the Lord Mayor. She arrived shortly after the stage show began and took a seat reserved for her. She was curious about the drama that had just started, which was called the three modes of material nature and she followed it closely. I asked her would she like something to eat and to my surprise she said “Yes please, I’ve been looking forward to this all day” Usually dignitaries are a little more circumspect when offered food and generally have to be cajoled into taking prasadam, so her response was very refreshing. While her plate was being prepared, she revealed that whenever she gets the chance she likes to eat at Govindas!

As I was digesting that little gem, she went on to ask whether we might be interested to cater for Dublin City Council meetings from time to time – I was beginning to think this was all a dream. However it most certainly was not and it just kept getting better and better.

Next came her short speech from the stage wherein she had nothing but praise for Rathayatra and declared it was her favourite street festival in the world. She even mentioned that she was very impressed with how organised we were

After she spoke, the next act was a marshal arts display by Dina Dayala das and as she watched, she commented that she could arrange workshops where he could train the young males of the city to help channel their energies in more positive ways. All in all she stayed with us for around two hours, which in my experience is quite unusual, normally they come, shake a few hands maybe kiss a few babies, say a few words and then leave.

Finally just before she left she asked if we would be interested to participate in some upcoming cross-cultural events that the city were organising, to which we happily agreed. As we shook hands she offered if we were ever in need of help to please contact her and if she would be able to assist us she would be more than happy to do so.

As the sun began to sink and the clean up got under way I couldn’t help thinking that by the mercy of Lord Jagannatha we might soon have a new bhaktin in the ashram, bhaktin Lord Mayor!