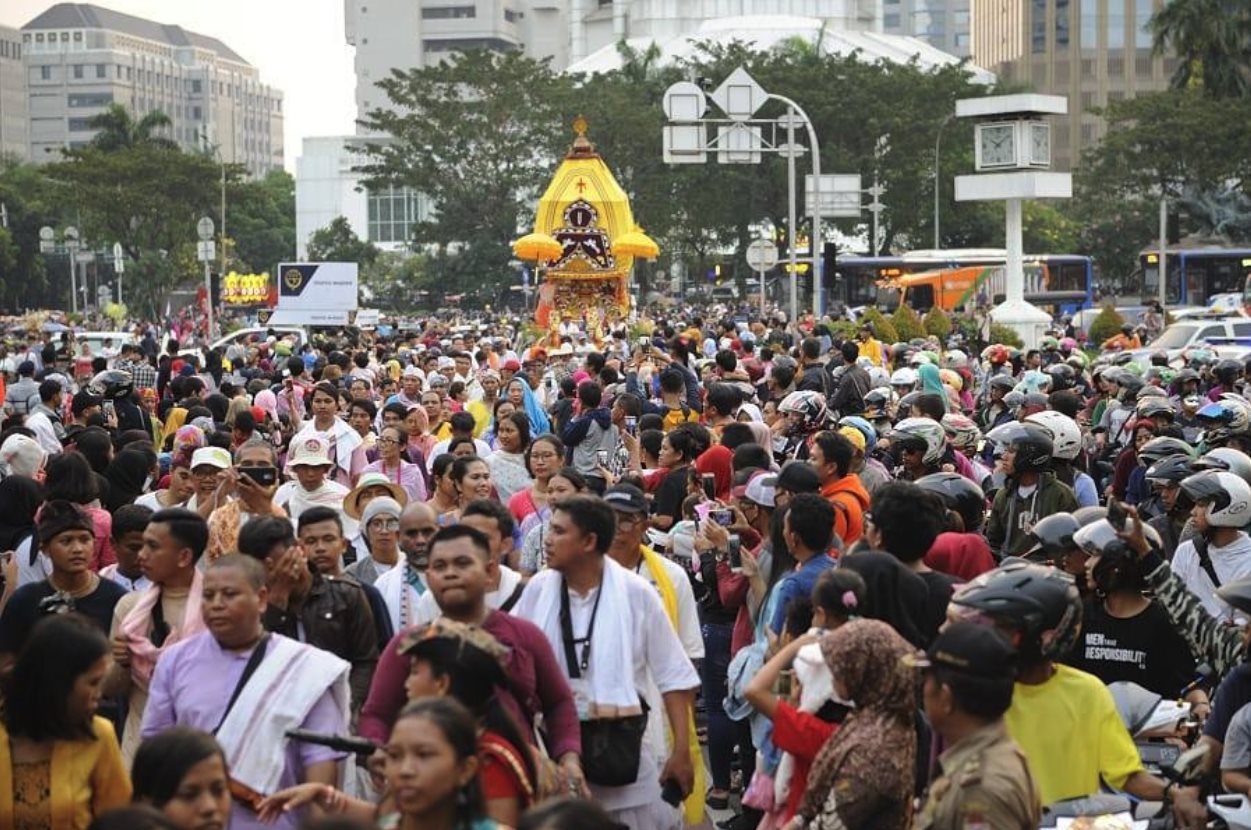 This time it was the occasion for the celebration of the 8th annual Rath yatra festival in the capital city of Jakarta, on the occasion of Jakarnaval at the time of the 492nd anniversary of Jakarta. Devotees sang melodious harinaam, and danced and pulled the rath.The excitement kept swelling, in the heart of the Capital City, where the community members had gathered to watch the carnival on Sunday afternoon, June 30, 2019. The costume and ornamental vehicle parade were added attractions.

Although the sun that day was quite hot but it couldn’t hold the visitors of Jakarnaval, to come right up to the iron barricade separating them from the parade, ready to cheer the cultural parade and passing decorated cars. Dozens of young women, wearing traditional clothes from various ethnic groups, the members of the Cultural Arts Training Center Management Unit (UP PPSB), West Jakarta Administrative City, kept smiling at people who packed the location of Jakarnaval.

The Hare Krishna community in Jakarta, never missed getting an invitation from the government. The devotees also pooled in their best of efforts to celebrate the festival in grand style. With his big Black Eyes, Lord Jagannath showered his merciful glance upon the citizens of Jakarta.

“Make the Ratha-yatra festival very great success. This will be a great introduction in your city and people will appreciate it” SPL to Syamasundara, 4th May, 1967.

Preparations began a week before the carnival day. As soon as the program was intimated to the devotees, they along with other participations of the parade held a technical meeting with the organising committee.

One day before the carnival, devotees finished preparing the chariot. The chariot was brought from Depok, which is about 2 hours from the temple in Jakarta. Chariot preparations began with cleaning it, checking its engine, and fixing some parts of the chariot. Later the chariot was beautifully decorated.

That evening, a day before, a bus full with devotees arrived from Lampung. They had especially come to participate in the Ratha Yatra organised in the Indonesian capital.

On the day of the festival, devotees celebrated ‘Pahandi Bije’ of Lord Jagannath, Baladev and Subadra Devi. ‘Pahandi Bije’ is a spectacular procession in which the deities are carried from their sanctum sanctorum to their respective chariots. In Jagannath Puri, it is the most special and colorful ritual for lakhs of devotees those who assemble to get a glimpse of the trinity.

Once on the Rath, the pujari offered bhoga to their Lordships, followed by arati. Coconuts were offered in front of the Rath to invoke auspiciousness. At 10.00 AM local time, the devotees pulled the Lord to the National Monument, where other participants of the carnival had gathered, that was the starting point for the parade. On the way towards the starting point, many passersby got attracted on hearing and seeing the devotees singing and dancing in estacy. Many among them snapped pictures with the chariot and with the devotees. After arriving at the Nasional monument, devotees rested, waiting for the carnival to begin. Meanwhile the devotees sang bhajans and enjoyed noon prasadam under a tree.

At 5.30 PM local time, the governor of Jakarta officially declared the festival ‘Open’. One by one participants presented their special performances in front of the honor stage where the governor and other guests were seated. When the devotees passed in front of the stage, the fired-up kirtan led by Premadana Prabhu hypnotized the people and made them to sing and dance in their respective places. A flower garland of Lord Jagannath was presented to the governor which he happily accepted. The governor heartily thanked the devotees for their enlivening participation in the parade. The parade started from the front city hall and finished in the circle of Indonesian Hotel. Devotees distributed Lord Jagannatha’s prasadam and Srila Prabhupada’s books.

All along the route, the community people were entertained by a series of creative and unique costume parades, in a fusion of sorts, cosplay card characters, traditional clothes, to ethnic Chinese and Indians. This illustrates the distinctive characteristics of Jakarta, whose society consists of various tribes and cultures and carries the spirit of unity in diversity.

2019, Lord Jagannath’s Rath Yatra in Jakarnaval was a grand success.

As Srila Prabhupada stated in his lecture that “So this festival, taking part in these festivals means a step forward for our self-realization. Rathe ca vamanam drstva punar janma na vijayate. Simply by seeing the Lord on the chariot, one makes advancement for stopping the repetition of birth and death. (lecture on Ratha-yatra-London, July 13, 1972).

The divine and dramatic spread of Lord Jagannath’s Rath yatras in Indonesia, will definitely etch an impression in the annals of Indonesian history. In 2012, the first Lord Jagannath rath yatra outside Bali, was organised in Jakarta, Since then Lord Jagannath has travelled to different islands of Indonesia reaching upto Papua in the east and ache in the west, thanks to the tireless efforts of the Indonesia devotees. The devotees are now well known and respected amount the Hindu community of Indonesia. These rath yatras definitely solidifies peoples soft yet deep-rooted faith in Lord Krishna which they once learnt from their forefathers. With the blessings from the spiritual master and previous acaryas, the Rath Yatras like a ray of Lord Jagannath’s mercy has illuminated whole Indonesia.

“I thank you all very much for making the Ratha-yatra festival so successful. Please convey my gratitude to all the boys and girls who participated in this great transcendental service”. SPL to Upendra, 4th July, 1968.

We would like to take this opportunity to offer our ever grateful obeisances to HH Kavichandra Swami and HH Ramai Swami, the GBCs of Indonesia, for their kind support and encouragement in accessing new avenues for sankirtan and to His Holiness Subhag Swami, whose guidance as a spiritual mentor has inspired us and given us the required force for arranging more and more Lord Jagannath Rath yatras throughout Indonesia.

All glories to Srila Prabhupada !!!