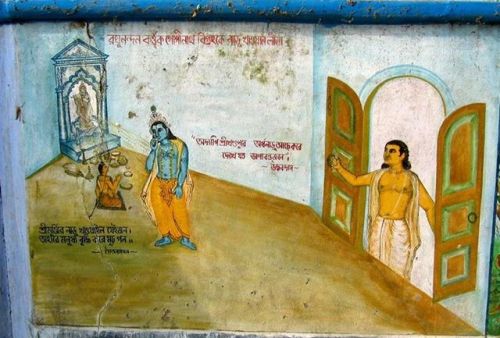 Raghunandan Das Thakur.
Shri Raghunandana Thakura made his appearance within this world in Shri Khanda. In his home he became acquainted with the worship of Shri Gopinatha from an early age. One day his father, Mukunda Dasa, who was a doctor, had to go away on medical business.

He called Raghunandana to his side. He told Raghunandana to see to it that their deity was served with great care and attention. He told him to be sure and feed the deity. At the appointed hour, taking the order of his father on his head, Raghunandan went to peform the service. He took the offering of food into the deity. Raghunandan was just a little boy. He told the deity: “Eat! Eat!” When he saw that the offering appeared untouched, he began to cry. Not being able to resist the child’s intense devotion, Krishna ate everything on the plate, leaving no remnants.

When Mukunda Dasa returned, he asked the boy, “Bring me the prasada remnants of the offering you made earlier.” The boy said, “Father, listen. I made the deity eat as you told me to. He left no remnants. He ate everything on his plate.” Mukunda was amazed at what the child was saying. Ordering the boy to offer food as before, Mukunda hid himself outside the house and watched through the window. Raghunandana, then, with great delight, offered Gopinatha a laddu. “Eat! Eat!” he said. The Lord ate half the laddu. Meanwhile, Mukunda, who was watching from outside, beheld all this in great amazement. He could understand that since the deity had already eaten once, and had not left any remnants, his hunger was satisfied. As a result, he could only finish half the laddu.

He embraced his son and held him on his lap. His voice was choked with divine emotion. Tears poured from his eyes like rain from a thundercloud. It is said that even today that half a laddu may be seen in Shri Khanda, where it is kept in one of the temples there.