The names of Krishna’s Personal Paraphernalia 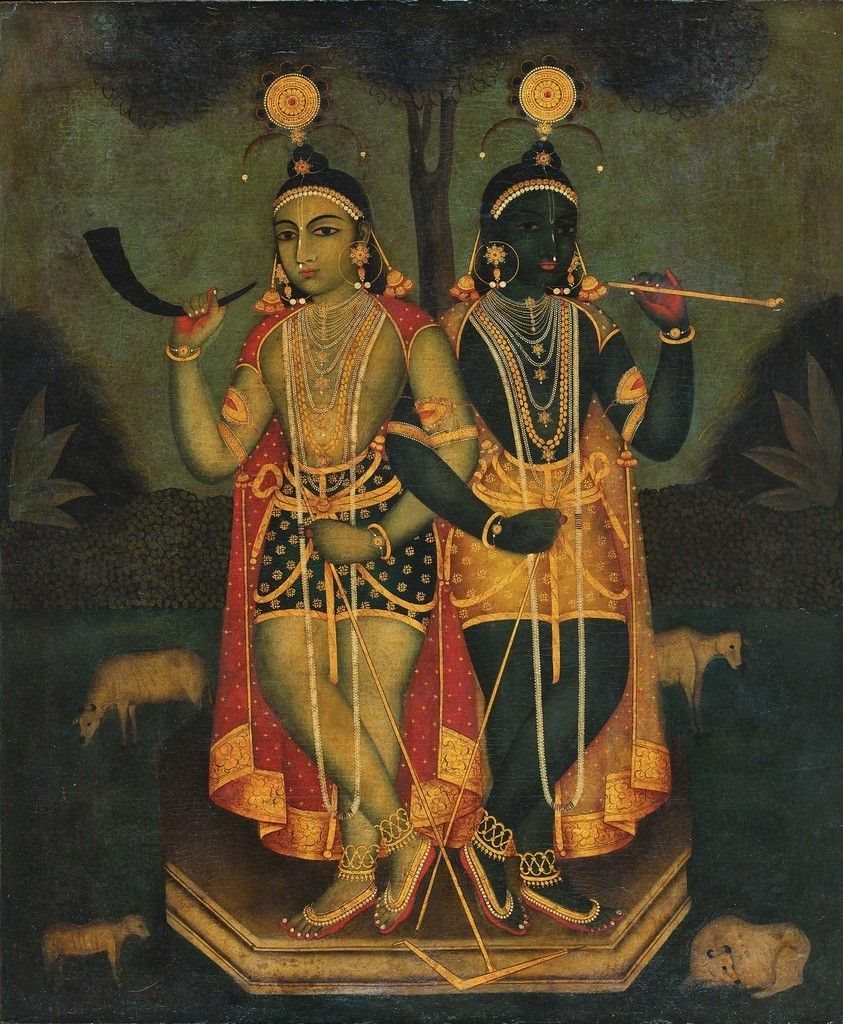 Just from a logical deduction perspective, Sri Krsna has to be the Original Supreme Personality of Godhead, the cause of all causes, one without a second. There is no one in the history of the universe that can compare to Him, in transcendental beauty, paraphernalia, qualities, pastimes etc.

(The following are names of some of His exquisite paraphernalia; His milk bucket, His signet ring, His earrings and locket, even His scissors.)

Krishna’s mirror is named Saradindu and His fan is named Marumaruta. His toy lotus flower is named Sadasmera and His toy ball is named Citrakoraka.

Krishna’s golden bow is named Vilasakarmana. The two ends of this bow are studded with jewels and it has a bowstring named Manjulasara.

Krishna has another flute named Mahananda, which is like a fishhook that captures the fish of Srimati Radharani’s heart and mind. Another flute, which has six holes is known as Madanajhankrti.

Krishna’s flute named Sarala makes a low, soft tone like the sound of a softly singing cuckoo. Krishna is very fond of playing this flute in the ragas gaudi and garjari.

The wonderful sacred mantra He chants is the name of His dearmost Radharani. His cane is named Mandana, His vina is named Tarangini, the two ropes He carries are named Pasuvasikara and His milk bucket is named Amrtadohani.

Krishna’s string of small bells is named Kalajhankara and His two anklets are named Hamsaganjana. The tinkling sounds of these ornaments enchant the deer that are the minds of the deer-eyed gopis.

Krishna’s jewel is named Kaustubha. In the Kaliya lake the Kaliya serpent’s wives gave this jewel to the Lord with their own hands.

Krishna’s peacock feather crown is named Navaratnavidamba, His gunja necklace is named Ragavalli and His tilaka marking is named Dristimohana.

Krishna’s garland of forest flowers and leaves, which reaches down to His feet and contains flowers of five different colors, is called Vaijayanti.

The eighth night of the dark moon in the month of Bhadra, when the moon rose together with its dear companion, the star Rohini, is the sacred time decorated by the birth of Lord Krishna in this world.

The best of all places of Krishna’s pastimes is the great garden known as Vrindavana forest. Another important place of the Lord’s pastimes is the beautiful and opulent Govardhana Hill. This Hill is very appropriately named for it nourishes (vardhana) Krishna’s cows (go) with its grasses.

The boat named Suvilasatara remains at this Paranga landing place. Another important place is Nandisvara Hill, Krishna’s home, where the goddess of fortune is personally present.

On Nandisvara Hill is the splendid white stone house where Krishna grew up. This house is named Amodavardhana because it is always filled with (vardhana) the pleasant fragrance (amoda) of incense and other aromatic substances.

The splendid kadamba trees named Kadambaraj and the king of the banyan trees named Bhandira grow in the forest of Vrindavana. On the sandy bank of the Yamuna is the pastime place named Anagaranga-bhu.

On the shore of the Yamuna River is the sacred place known as Khela-tirtha, where Lord Krishna eternally enjoys pastimes with His dearmost Srimati Radharani.

When guru worship gets sentimental