To usher in auspiciousness, the Harinam Ministry of Sri Jagannatha Mandir, ISKCON Kuala Lumpur held a Maha Harinam during the temple’s Sunday Feast Festival on 11th October 2009. It was an opportune moment, being the most auspicious Damodara Masa as well as it being only a few days away from Deepavali Celebrations.

Logistical problems and the late departure from SJMKL resulted in the Maha Harinam starting at midday; a delay of about an hour and a half.

Sarvatirtha Krishna Prabhu and his team of devotees at Taman Sri Sentosa were on hand to welcome the congregation who had travelled in private cars and in two coaches. The welcoming party were excellent hosts as were their devotion for detail in decorating the deity alters at the local Taman Sentosa ISKCON Centre, The Sri Gauranga Prema Tirtha. They were kind hosts to all the devotees and made every effort to attend to the needs of the arriving congregation with care and affection. 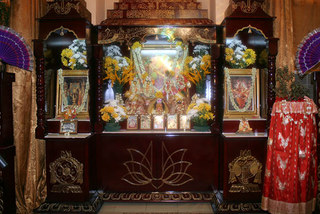 Prior to the start of the Maha Harinam, the Kirtan during the offering of flowers and obeisances to HDG Swami Srila Prabupada were melodious, harmonious and food for the soul.

The mid day heat did not deter the assembled devotees who were ready and ever willing to share and recite the holy name of Lord Sri Krishna in the homes and to reach out to the hearts and minds of all the residents who were willing listeners to their messages.

The congregation was divided around a team of 27 leaders. Every team was well provided with Damodara Deepavali altar calendars, information leaflets, cards and ghee lamps. Some team leaders went a step further by bringing along beautifully decorated figurines of Mother Yashoda & Baby Krsna and provided prasadam for distribution as well. The teams spread out into the neighbourhood of Taman Sentosa, Klang. Some teams began on foot while others were ferried in the two busses to pre-designated sites further and deeper into the neighbourhood.

For the devotees, it was an opportunity to acquaint with the local residents as well as simultaneously spread the mercy of Lord Damodara. The ringing of kartals to the harmonious accompaniment of the mrdangas for the chanting of the Maha Harinam, made for a joyous sight to behold … the Vaishnava devotees “taking over” of this neighbourhood in Klang.

The Harinam teams spread out into the township, visiting each row of homes. Devotees were duly assigned and a target of 20 homes was set for each team for the 2 hour Harinam. It was indeed a sight to savour. Every home in every street had devotees at their doorsteps, introducing Their Lordships, and narrating the leela of Lord Damodara being bound by Mother Yasoda’s tender love and motherly affection. As in many past instances, it continues to amaze individuals reached during the Harinam that there is in fact much more to the month of Deepavali than the demise of King Nargasuran, symbolizing the triumph of “Good over Evil”. 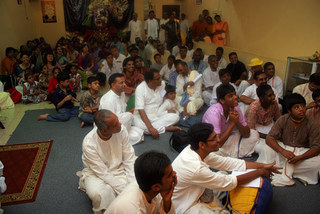 When the details were finally tallied, a total of 400 homes had been graced with the presence of Lord Sri Damodara. In addition, a total of 1,500 individuals had the opportunity to offer ghee lamps to Their Lordships and receive a polite narration of the glories of the month Damodara.

HG Sarvatirtha Krishna prabhu led the kirtan after the culmination of the Maha Harinam and upon the devotees offering of the ghee lamps. It was both ecstatic and joyful. A heartfelt thanks and compliments to Sarvatirta Prabhu and his team for leaving no stones unturned in making the inaugural Maha Harinam in Taman Sentosa a truly memorable one.

This was indeed a successful event as it gave much inspiration to both the congregational devotees of Sri Gauranga Prema Tirtha, Klang and Sri Jagannatha Mandir, KL.

We continue to pray for the mercy of all Vaishnavas and the blessings of Their Lordships such that we may be able to reach out to more individuals during this month of Damodara; in our quest to fulfil HDG A. C. Bhaktivedanta Swami Prabupada’s mission.

cetasa sarva karmani, mayi sanyasa mat-parah
“In all activities just depend upon Me and work always under My protection..”
Bhagavad-Gita 18.57