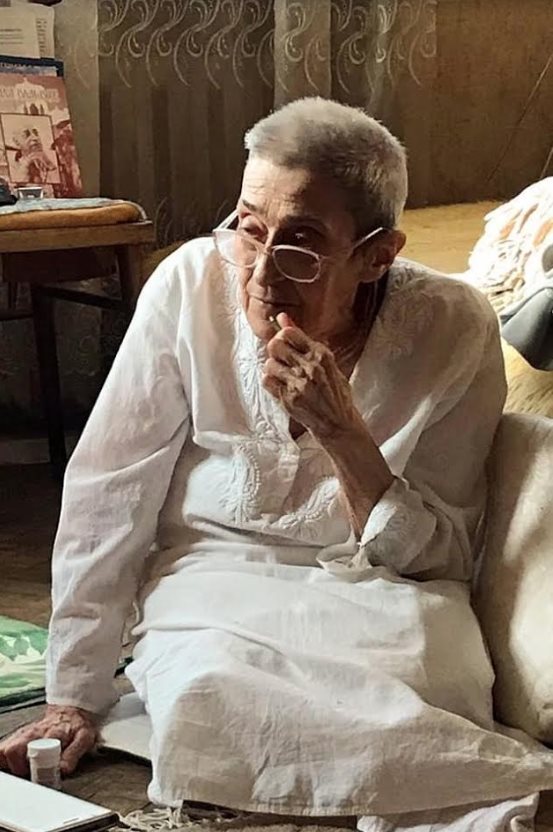 Radhanath Swami: Anandini Devi is a precious soul whose brilliant light of devotion illuminates our hearts with Krishna’s grace. In her special gentle, motherly way she embodies incredible courage, genuine humility, deep intelligence and profound wisdom. Her dedication to Sri Guru and Sri Gauranga and to the well being of the Vaisnava community and to the world is glorious. Whatever situation came, Anandini Devi remained always focused on the essence of pure devotional service. The sweet power of her unconditional love and compassion is the gift of her life to Srila Prabhupada, Radha Gopinath and to the world.

I am lost for words upon hearing of her disappearance. But her living example resides in our hearts. I am forever grateful to you Anandini Devi. Your lifetime was a glorious offering of love. Now you have entered into Radha Shyamasundar’s loving embrace. With our tears of separation from you, we will celebrate your beautiful life and your auspicious destination.

Niranjana Swami: I first met Anandini thirty years ago during my visit to Moscow in 1989. I always remember her as a very serious and caring devotee, always eager to attend every program we conducted during those early times.

In the very early 1990’s I was stricken by what appeared to be a cholecystitis attack during a lecture in Leningrad. Devotees did not know what to do with me because the hospital situation in Russia during that time was very unpredictable. But Anandini came forward and insisted that she be allowed to arrange everything for me in a Moscow hospital through her daughter who was a doctor in that hospital. The devotees packed me away in the train from Leningrad to Moscow and Anandini was there to receive me to follow through with all of the arrangements for me. She stayed on top of everything for me until the proper diagnosis had been made and a treatment was prescribed. In particular this one memory of her stands out in my mind from almost thirty years back.

A little more than three months ago, on May 8th, devotees in Moscow arranged a gathering for many of the early devotees who joined during the communist times. I was also invited to take part and to speak at this gathering.

When I arrived, Anandini dd cheerfully greeted me and tried to hold my attention as much as possible before more of the devotees who had already gathered in the other room found out that I had arrived.

She expressed so much gratitude to me from her experiences during those early visits to Moscow.

While Anandini was speaking, I seemed to recall that she had not left her flat for many years due to illness. I was therefore surprised to see that she attended the event and expressed this to her. She was obviously sickly, but she joyfully spoke to me with great vigor. She therefore had initially given me the impression, by her enthusiasm alone, that she was much healthier than she actually was. But towards the end of our semi-private but brief conversation she disclosed to me that her participation in this event was the first time she left her apartment in something like ten years. She told me that she did not want to miss the opportunity for the world.

Later, during our 90 minute discussion with all the devotees assembled, Anandini sat the entire time on the floor. Although many devotees were seated on chairs, she insisted that she wanted to sit on the floor despite her obvious discomfort. She seemed so happy just to be there, just to listen, and to drink up the opportunity to be in the association of devotees, that I simply forgot that she was not at all healthy.

When I was getting ready to depart from the gathering, Anandini approached me once again and thanked me profusely for what she described as a very joyful and wonderful evening. I remember telling her that I was so happy to see her so enlivened and apparently healthy, that the next time I would visit Moscow, I would be so happy to see her again. She smiled and thanked me. But now that I think back, it seems that she was expecting that she may not be around for my next visit. She did not openly express that to me, but now having heard that she departed everything seems to be coming together. I suspect that she sensed she would be departing very soon but did not want to burden me with such a thought. In my mind’s eye, I can still see the smile she had on her face as I was leaving.

Such a wonderful devotee! I pray that Srila Prabhupada blesses her with the wonderful fruit of pure devotional service for all the sacrifices she made in service to his glorious mission.

In the Dungeon With Shridhar Swami
Retiring From Family Life

How I Became a Devotee – Jayananda, The Perfect Leader