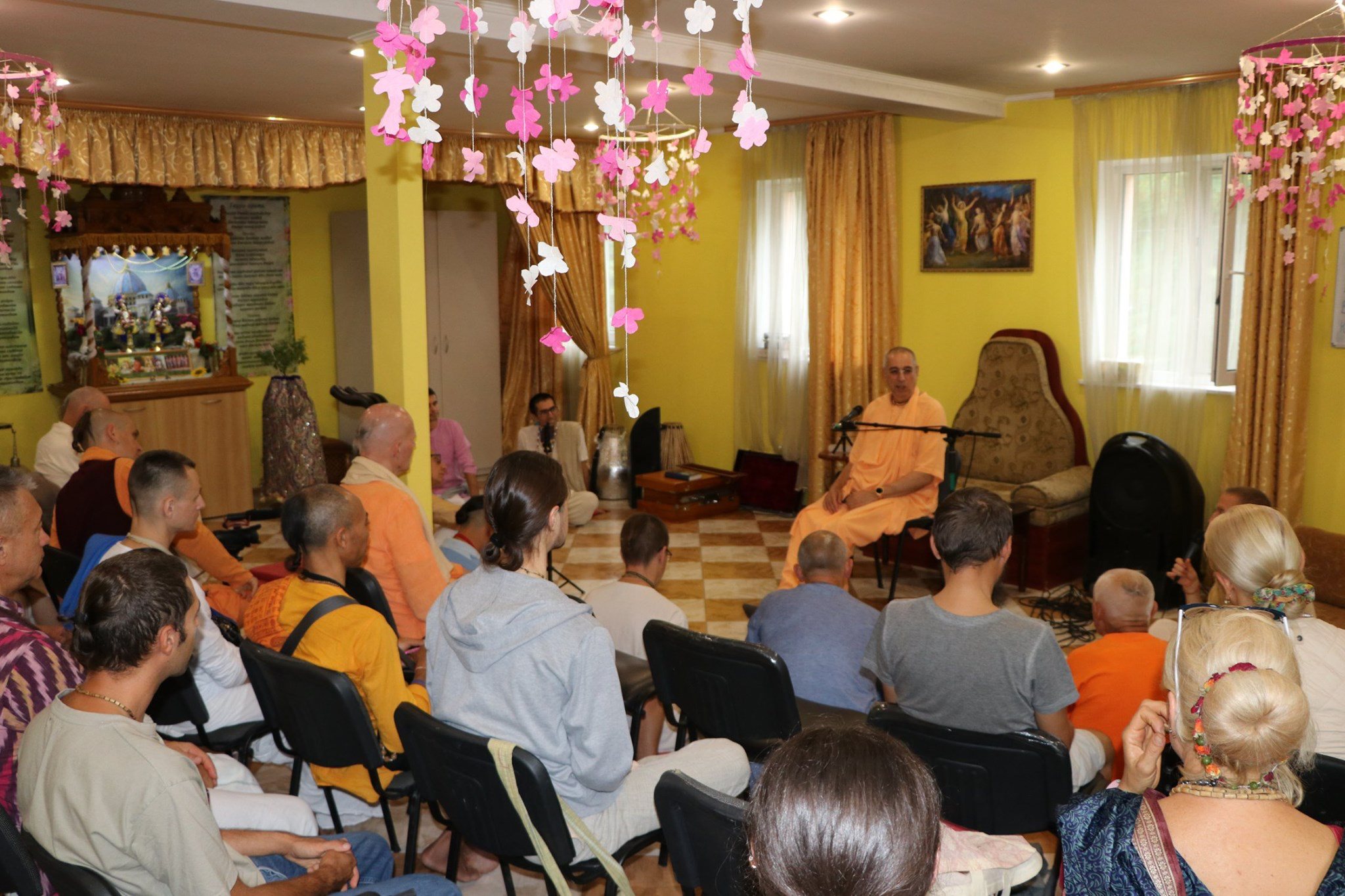 By Ukranian IMCPA ( Ministry for Cow Protection and Agriculture)

Ukraine held the first ISKCON Farm Organization meeting in New Mayapur, from the 16-18th of August. The event targeted on how to accomplish the recent GBC resolution that by Janmastami 2022, all ISKCON centers should have a plan on how to supply the Deities with Dairy from protected cows.

New Mayapur, Ukraine, is located on the territory of an ex-pioneer camp in the protected forest and on the bank of the river Oryl, which is one of the cleanest rivers in Ukraine. The nearest village is 4 km and only 108 km from the Dnipro International Airport.

This project started in 2006, and for the last 13 years, they have been conducting various education courses and festivals with spiritual leaders of the International Society for Krishna Consciousness. Their 360-square-foot pandal can accommodate up to 500 guests.

The concept of the New Mayapur project is displayed in a unique way, where ISKCON holds 3 hectares for spiritual and educational activities. Also, different devotees have businesses that support the activities of ISKCON in adjacent areas.

One of these is an organic farm managed by Premarasa members use plots of land to produce food on the 150 hectares of land certified for organic production.

They make their own hummus from vermicomposting. Members grow spelt wheat, rye, pumpkin and other crops. On more than 10 hectares they also produce organic raspberry, strawberry and currant which they sell frozen to Europe.

Another project is an Ayurvedic clinic, which is managed by a couple, Vijaya Govinda prabhu and Gokula Taruni devi dasi. The guest houses of the clinic are built and decorated in an authentic Ukrainian style and they use Ukrainian herbs to treat the patients. It is a successful program and shows direction towards including healing practices in ISKCON farm projects.

For the meeting around 40 delegates were present from different private projects across Ukraine and there were many devotees who are advocates of simple living and high thinking like bhakta Eugene and his wife bhaktin Svitlana who have taken part in organizing related events for the past 10 years.

HH Bhakti Raghava Swami and HG Adikarta prabhu (ACBSP) participated in the round table for supplying dairy products from protected cows to the Deities in Ukraine. HH Bhakti Raghava Swami emphasized that every temple could have their own cows. HG Adikarta prabhu also noted that unless we show some real and viable farm examples based on the teachings of Srila Prabhupada, we could end up becoming just armchair philosophers.

This event is part of the Farm Conference Cycle held by the GBC Ministry of Cow Protection and Agriculture (IMCPA) in partnership with regional IMCPA representatives and local ISKCON projects.

The leaders of the Ukrainian yatra presented valuable inputs for the development of the region. HH Niranjana Swami as the GBC member for the area opened the event by describing the importance of cow protection and agriculture for devotees. As he is constantly traveling he observes how many devotees have to struggle with the high costs and stress that the urban lifestyle imposes, which can impact their spiritual practice as well.

HG Acyuta Priya prabhu as a Zonal Secretary stated that he wishes to see the right seeds planted in the region. He believes that truly sustainable projects gearing towards self-sufficiency will accomplish the mission so much desired by Srila Prabhupada.

One of the main focuses of the event was to address the issue of supplying dairy from protected cows to the Deities in the Yatra. The presence of the leaders was a direct response to the GBC resolution that temples should make a plan to provide dairy from protected cows by Janmastami 2022. The Ukrainian Yatra was first in starting this discussion on a national level. During the meeting, there were three breakout groups: producers, temple representatives, and leaders. The dialogue was very insightful and helped indicate potential challenges and opportunities. Everyone agreed that progress in cow protection efforts relies on the members’ ability to act on Vaishnava principles.

The Yatra already gave a big step by quantifying the current demand. The discussions revealed that the dairy supply should be based on relationships. Also, a set of standards would be ideal to understand if the farm is genuinely slaughter-free.

To tackle such a big task there needs to be great cooperation between different segments of devotees, who are to develop a qualified and pragmatic approach. Reports show how a sentimental perspective on cow protection has led to unplanned difficulties. There is much work to be done, and attendees were happy that a very focused discussion started. Some described it as a major breakthrough.

Education needs were identified as the most solid outcome of the event. Therefore the last session was dedicated to choosing a venue and topics for the first Ukrainian Farm Conference to take place in 2020.

The Ukrainian representatives of the Ministry attended the European ISKCON Farm Meeting in the Czech Republic two weeks later where Ukraine was unexpectedly almost unanimously voted as the next destination for the European Farm Conference, which brings two conferences to a convergence.