A visit to Rajani Priya Dasi (Rose Forkash) (Album of… 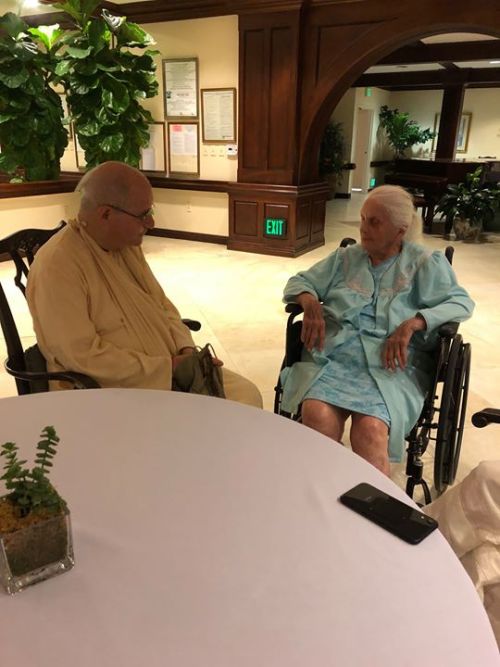 A visit to Rajani Priya Dasi (Rose Forkash) (Album of photos)
Rose Forkash was initiated by Giriraj Swami and given the name Rajani-priya dasi at 94 years of age.
Giriraj Swami: Yesterday eight of us—Kuntidevi, Lavanga Manjari, Nanda Kishore, Kandarpa Manjari (his wife), Gopal (their son), Srimati (their daughter), Jivan Mukta, and I—visited Rajani Priya Dasi (Rose Forkash) at Mission Terrace Convalescent Hospital, where she is staying temporarily. She was as Krishna conscious as ever and told us how she is getting staff, patients, and visitors to chant Hare Krishna. She explains the philosophy behind it and gives them pieces of paper with the maha-mantra written on it—and she takes great pleasure in seeing them chant.

Before I left, she blessed me, saying, “May you live a long life—as long as or longer than me—in good health, so you can chant Hare Krishna and deliver your important message to many more people.”

I will be leaving for Texas tomorrow and retuning in two months, and I look forward to meeting her again when I return—back in Carpinteria.