Be a “fun addict” not a fanatic! 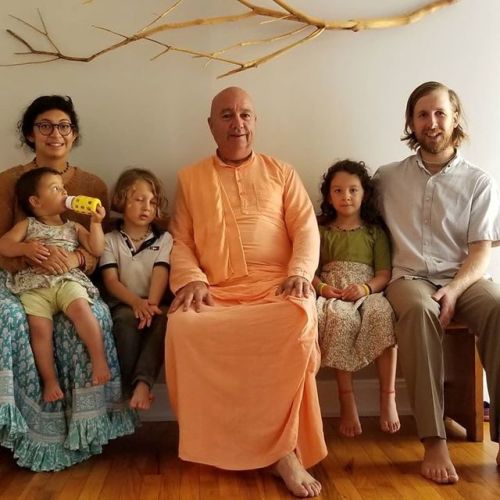 Be a “fun addict” not a fanatic!
Bhaktimarga Swami: I was very arrogant when returned home for the first time after becoming a devotee. I burnt incense though my mother did not like it. I thought I was better than my brothers and sisters. Later on by reflection I understood my mistake, and I vowed never to act as a fanatic again.

Be a “fun addict” not a fanatic.

One self-help teacher said there are many things that we cannot learn except by trying and failing.

Bhakti Vidya Purna Swami uses an analogy of a well dressed person slipping and falling into a ditch and lying there lamenting about how he got there and the consequences of being there rather than getting out of the ditch and going on his way. This is an analogy about wallowing in guilt.

As a counselor, I help people rewrite their stories so they see the same situation in a more positive way.

Seeing through the scriptures is way of changing our stories.

When I was temple president in Vancouver, in the beginning it was very hard to get the devotees to go out on sankirtana. However, when I would come to pick them up at 6:00 p.m. they were not eager to come back to the temple.

The stories in the Srimad-Bhagavatam and Sri Caitanya-caritamrita are so extreme that although we may feel we have some issues ourselves, our issues are insignificant in comparison to the people in those stories.

Sometimes we have difficulty controlling our thoughts because they are based on deep rooted beliefs which have not changed.

If you are not a vaishya, you can go to so many seminars on how to get rich, but you will never be rich. You will get all the information, but you will not be able to apply it.

There are different beliefs a chronic critic might have. He may think he is better than others. He may not feel good enough about himself so he compensates by bringing other people down. He may feel he has to get back at someone. By changing the belief, he can give up the criticism.

This is important because we always talk about changing thoughts but we do not talk about the beliefs upon which our thoughts are based.

A pure devotee is happy thinking that others are better.

Srila Prabhupada advised serving someone you are envious of.

You can display a white sheet of paper with a black dot in the center, and ask people what they see. Generally people say, “I see a black dot.” You can ask them, “There is a whole white sheet there. How is it you just saw the black dot?” That black dot is criticism.

Abraham Lincoln said, “He who has a heart to help has the right to criticize.”

Comment by Gaura Prabhu: It is good if people criticize you. It means they care about you, and they want you to improve. When people no longer criticize you, it means they have given up on you.

The false ego gets us to accept the thoughts in our mind as ours.

Srimad-Bhagavatam 11.20.27–28 verse and purport explain the proper mental attitude of an advancing devotee.

As long as you do not give in and believe what your mind is telling you, you can progress in Krishna consciousness.

The best advice I got is, “Why don’t follow your own advice?” Imagine if we all followed the advice we gave in classes and seminars!

Sometimes you do not say anything wrong, but it is the wrong thing. Maybe it is to the wrong person or the wrong time.

Bhaktivinoda Thakura says if you find fault someone you give them your good karma and you take their bad karma.

Bhaktisiddhanta Sarasvati Thakura says if someone criticizes you that Lord Caitanya is trying to make you more humble than a blade of grass. If someone praises you, they are telling you what they want you to become.

Comment by Krishnadasa Kaviraja Prabhu: My wife, Paurnamasi, came up with a strategy when driving to deal with people who cut you off. She says, I curse them to get a Bhagavad-gita.“” Then we laugh and the negative emotion goes away.

I would say, “Never punish someone when you are full of resentment.” You may have to punish people because that’s your job.

The sastra says that only the vaisyas do not forgive people. I do not understand the reason for that.

Comment by a devotee: In a bar many years ago, one guy was disturbing everyone, and one lady came up to him and spoke to him as if speaking to a three-year old, and he completely quieted down.

Forgiveness means to give up hope for a better past.

Forgiveness does not happen logically. It happens from the heart. If you look at it is logically, you will never forgive. For people who look at things logically then you can present how it is in their self interest to forgive.

Nelson Mandela said, “Resentment is like drinking poison and then hoping it will kill your enemies.”

You can forgive people who are no longer here. It is good for you.

Sometimes people say, “Forgive and do not forget.” For example, if your business partner steals all your money, you may forgive, but you may not want to make him a business partner in the future.

I have a class on how your psychology affects your japa. A lot of bad japa comes from bad psychology.

Imagine your life was such that people would learn a lot about Krishna consciousness from just seeing how you live!

The greatest service to Srila Prabhupada is to be an example of his teachings.

“I know I should, but …” is tamo-guna, determination which does not go beyond dreaming.

Integration means you do what you say you will do.

Interesting enough, Krishna spoke to Arjuna on his job site, giving practical guidance for how to act.

When you become a devotee, at every class you attend you learn something new. If you do not act according to the new knowledge, you will feel bad about that. Thus you have to make the effort to try to act according acquired knowledge.

It is curious that the Amish became a cult for living how everyone used to live before industrialization.

The Amish forgave the man who shot ten of their girls and killed six. In commenting on that a priest said, “They had been preparing for that act of forgiveness for a lifetime. It was built into their practice as people who forgive.”

Comment by Krishnadasa Kaviraja Prabhu: When my wife, Paurnamasi, had a stroke, the doctor who dealt with her for the next two weeks after she had her stroke, was surprised that she was consistently happy, when most people were always depressed. She said, “I believe that I am not my body. I tell people I am not my body. Now I have to live it.”

A brahmacari in Denver said at a forgiveness workshop, “We are getting unlimited forgiveness coming down from Srila Prabhupada and Krishna. Should it stop with us, and turn into resentment?”

As long as we are trying to taste material things, we cannot taste the spiritual nectar that can complete satisfy our soul.

Even some devotees I have had horrible disagreements with, if I were on my deathbed they would help me remember Krishna, I am convinced.

We have so many standards to judge people by, so we tend to be judgmental but being judgmental does not improve relationships, and it also leads to offenses to devotees.

We have to decide if we want to judge people or have good relationships with people.

Why do we judge people? One reason may be we expect senior people to be examples because it helps us.

Sometimes leaders are very supportive and affectionate toward people who agree with them and make life difficult for others. If you are obliged to work with such people, you have to try not to ruffle any feathers, otherwise you will have to tolerate a lot of negativity.

If you focus on the negative, you will become discouraged. So if you want to achieve something, even if your criticisms are valid, you may be more effective at attaining your goals to just not worry about it.

The mission statement of HH Sridhara Swami (1995)
A “Tilaka station” in the Montreal ashram! Krishna...
Tagged under: Nectar