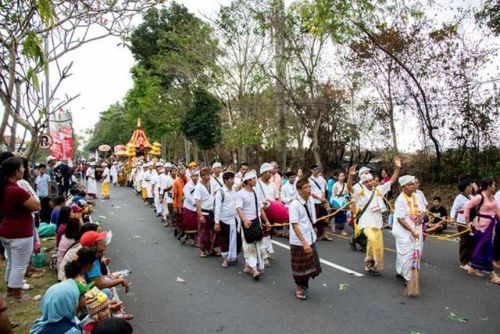 Negara is a city situated in Western Bali around two and a half hours from Denpasar. It is the capital of Jembrana and has a population of around 300,000. The 124th anniversary celebration of the city was held on the 1st of September 2019. ISKCON Indonesia, by presenting the Sri Jagannath Ratha Yatra parade, enlivened the annual festival and cultural program organized by the Jembrana district government.

This year’s Jembrana Festival was held for one full month with a variety of activities during the month of August. It was attended by around 26 participants who came from several districts in Bali and several participants from Java. Government officials such as the Governor of Bali, Regent and Deputy Regent of Jembrana, Chairman of the Regional Parliament and Regional Secretary of the Regency attended the festivities. Seizing the opportunity, devotees presented the honored guests with the Bhagavad Gita and various other books written by Srila Prabhupada.

In Negara there are two centres of Bhakti Yoga preaching Krishna Consciousness under ISKCON. The devotees were invited to participate in the yearly parade by holding a Jagannath Ratha Yatra.
“He is Jagannätha. He’s not only this Puré-nätha, or Oriya-nätha; He’s Jagannätha. Kåñëa declares in the Bhagavad-gétä, bhoktäraà yajïa-tapasäà sarva-loka-maheçvaram [Bg. 5.29]. That is the definition of Jagannätha: sarva-loka-maheçvaram.” — Srila Prabhupada, Evening Address in Jagannätha Puré, January 26, 1977—

The two preaching centers in Negara combined forces and worked together with the Jagannath Ratha Yatra Nusantara Team. Before the parade started, a short recorded message from His Holiness Subhag Swami was played. Maharaj described the history of the Ratha Yatra festival and how Srila Prabhupada introduced Ratha Yatra in the West. Varieties of foodstuffs were offered to Their’ Lordships and a traditional Balinese dance was performed for Their pleasure. After coconuts were broken and an arati ceremony was performed in order to invoke auspiciousness, devotees started pulling the chariot along the parade road. There was melodious kirtan along the course of the parade along with prasadam and book distribution.
“Regarding Ratha-yatra, you can change the date according to a suitable time. You may hold it in Paris whenever it is the best time. It will attract many persons. Please do it.” —SPL to Bhagavan, 7th November, 1976—

By Jagannath’s mercy the parade was a grand success. Everyone was in bliss.
ISKCON Indonesia and Bhakti Yoga Center expressed their gratitude for all the support from the Jembarana Regency Government. Special thanks to the District Head, Kec. Mendoyo, who enthusiastically invited the devotees to join this cultural parade.
Our ever grateful obeisances are due to HH Kavichandra Swami and HH Ramai Swami, the GBCs of Indonesia, for their support and guidance to always look for new avenues for sankirtan. Our humble obeisances to HH Subhag Swami for his inspiration and always reminding us of the importance of the Sankirtan movement of Mahaprabu and for inspiring us with the dedication of Sriman Jayananda Prabhu, for bringing us closer to Srila Prabhupada and keeping us united in family of ISKCON.

The legend of Lord Jagannath

Tips for Moms (and Dads)