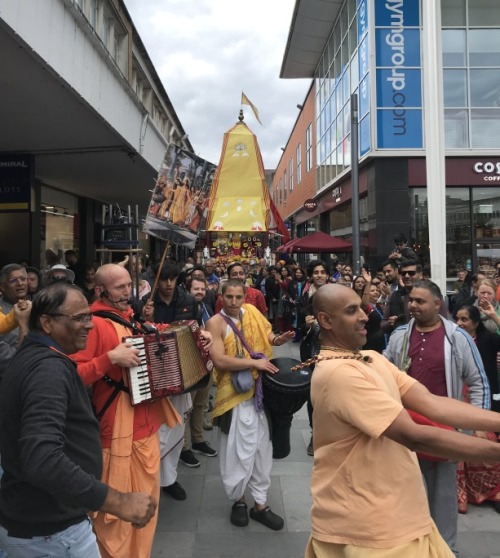 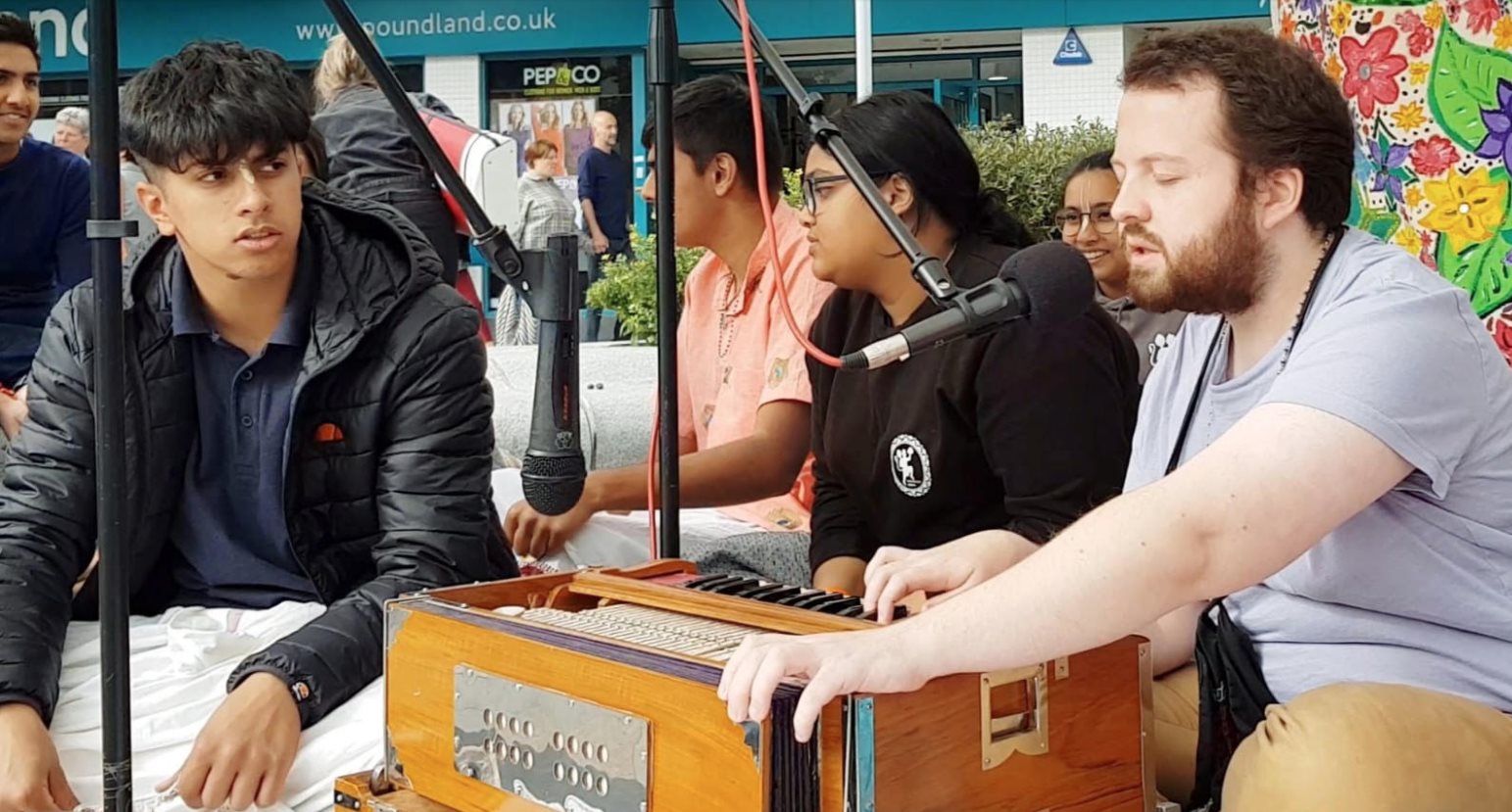 In the Brahmāṇḍa Purāṇa it is said: “A person who sees the Lord’s Ratha-yātrā car festival and then stands up to receive the Lord can purge all kinds of sinful results from his body.” A similar statement is there in the Bhaviṣya Purāṇa, in which it is said: “A person who follows the Ratha-yātrā car when the Rathas (Deities) pass in front or from behind, even if born of a lowly family, will surely be elevated to the position of achieving equal opulence with Viṣṇu.

This is the 12th year where their Lordships have graced the town of Crawley with their presence for the annual Ratha Yatra Festival organised by the local devotees. The devotees lovingly get together every year without fail headed by Ajay Prabhu to spread the yuga dharma outside of their Bhakti Yoga Centre.
HG Parasurama Prabhu provided the cart, deities and free Prasadam, which he tirelessly cooks, distributed out to everyone. Srila Prabhuapda’s books were distributed by the local devotees, and there was also henna and face painting to bring in the crowd. There was also sweet stage kirtan led by Gurukulis.

The Ratha Yatra is a great example of a local small community being consistent with the festival every year, come rain or shine, for Sri Caitanya Mahaprabhu’s movement.

Srila Prabhupada lecture: LONDON – July 16, 1972
These feelings of separation was preached by Lord Caitanya. So this Ratha-yātrā festival is still observed in Jagannath Purī in India. And five hundred years ago Lord Caitanya participated in this festival, and He was in the mode of separation as if Rādhārāṇī was taking back Kṛṣṇa to Vṛndāvana. So this Ratha-yātrā festival is a feeling festival for the Vaiṣṇava. Lord Caitanya taught us how to feel separation of God. Lord Caitanya never taught us that He had seen God, but He felt the separation of God very severely. Similarly, His next disciples, the Sad-Gosvāmīs, they also prosecuted their devotional service by separational feelings.
he rādhe vraja-devike ca lalite he nanda-suno kutaḥ
śrī-govardhana-kalpa-pādapa-tale kālindī-vane kutaḥ
ghoṣantāv iti sarvato vraja-pure khedair mahā-vihvalau
vande rūpa-sanātanau raghu-yugau śrī-jīva-gopālakau
So this Ratha-yātrā festival is very nice, feelings festival for the Vaiṣṇava. And anyone who is participating in this festival, he’ll gradually develop his dormant love for Kṛṣṇa.

Sweet reminiscence of Janmastami and Radhastami in Mayapur
KIRTAN FEST 2019 at ISKCON of Houston
Tagged under: Nectar