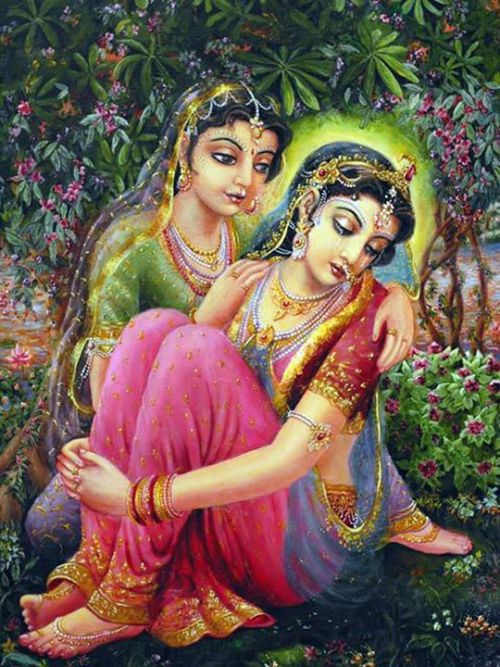 Srila Jiva Gosvami (CC Adi 10.85)
In the Gaura-ganoddesa-dipika (195) it is said that Srila Jiva Gosvami was formerly Vilasa-mañjari gopi. From his very childhood Jiva Gosvami was greatly fond of Srimad-Bhagavatam. He later came to Navadvipa to study Sanskrit, and, following in the footsteps of Sri Nityananda Prabhu, he circumambulated the entire Navadvipa-dhama. After visiting Navadvipa-dhama he went to Benares to study Sanskrit under Madhusudana Vacaspati, and after finishing his studies in Benares he went to Vrndavana and took shelter of his uncles, Sri Rupa and Sanatana. This is described in the Bhakti-ratnakara. As far as our information goes, Srila Jiva Gosvami composed and edited at least twenty-five books. They are all very much celebrated, and they are listed as follows: (1) Hari-namamrta-vyakarana, (2) Sutra-malika, (3) Dhatu-sangraha, (4) Krsnarca-dipika, (5) Gopala-virudavali, (6) Rasamrta-sesa, (7) Sri Madhava-mahotsava, (8) Sri Sankalpa-kalpavrksa, (9) Bhavartha-sucaka-campu, (10) Gopala-tapani-tika, (11) a commentary on the Brahma-samhita, (12) a commentary on the Bhakti-rasamrta-sindhu, (13) a commentary on the Ujjvala-nilamani, (14) a commentary on the Yogasara-stava, (15) a commentary on the Gayatri-mantra, as described in the Agni Purana, (16) a description of the Lord’s lotus feet derived from the Padma Purana, (17) a description of the lotus feet of Srimati Radharani, (18) Gopala-campu (in two parts) and (19-25) seven sandarbhas: the Krama-, Tattva-, Bhagavat-, Paramatma-, Krsna-, Bhakti- and Priti-sandarbha. After the disappearance of Srila Rupa Gosvami and Sanatana Gosvami in Vrndavana, Srila Jiva Gosvami became the acarya of all the Vaisnavas in Bengal, Orissa and the rest of the world, and it is he who used to guide them in their devotional service. In Vrndavana he established the Radha-Damodara temple, where, after retirement, we had the opportunity to live from 1962 until 1965, when we decided to come to the United States of America. When Jiva Gosvami was still present, Srila Krsnadasa Kaviraja Gosvami compiled his famous Caitanya-caritamrta. Later, Srila Jiva Gosvami inspired Srinivasa Acarya, Narottama dasa Thakura and Duhkhi Krsnadasa to preach Krsna consciousness in Bengal. Jiva Gosvami was informed that all the manuscripts that had been collected from Vrndavana and sent to Bengal for preaching purposes were plundered near Visnupura, in Bengal, but later he received the information that the books had been recovered. Sri Jiva Gosvami awarded the designation Kaviraja to Ramacandra Sena, a disciple of Srinivasa Acarya’s, and to Ramacandra’s younger brother Govinda. While Jiva Gosvami was alive, Srimati Jahnava-devi, the pleasure potency of Sri Nityananda Prabhu, went to Vrndavana with a few devotees. Jiva Gosvami was very kind to the Gaudiya Vaisnavas, the Vaisnavas from Bengal. Whoever went to Vrndavana he provided with a residence and prasadam. His disciple Krsnadasa Adhikari listed all the books of the Gosvamis in his diary.

The sahajiyas level three accusations against Srila Jiva Gosvami. This is certainly not congenial for the execution of devotional service. The first accusation concerns a materialist who was very proud of his reputation as a great Sanskrit scholar and approached Sri Rupa and Sanatana to argue with them about the revealed scriptures. Srila Rupa Gosvami and Sanatana Gosvami, not wanting to waste their time, gave him a written statement that he had defeated them in a debate on the revealed scriptures. Taking this paper, the scholar approached Jiva Gosvami for a similar certificate of defeat, but Jiva Gosvami did not agree to give him one. On the contrary, he argued with him regarding the scriptures and defeated him. Certainly it was right for Jiva Gosvami to stop such a dishonest scholar from advertising that he had defeated Srila Rupa Gosvami and Sanatana Gosvami, but due to their illiteracy the sahajiya class refer to this incident to accuse Srila Jiva Gosvami of deviating from the principle of humility. They do not know, however, that humility and meekness are appropriate when one’s own honor is insulted but not when Lord Visnu or the acaryas are blasphemed. In such cases one should not be humble and meek but must act. One should follow the example given by Sri Caitanya Mahaprabhu. Lord Caitanya says in His Siksastaka (3):

“One can chant the holy name of the Lord in a humble state of mind, thinking himself lower than the straw in the street. One should be more tolerant than a tree, devoid of all sense of false prestige, and should be ready to offer all respect to others. In such a state of mind one can chant the holy name of the Lord constantly.” Nevertheless, when the Lord was informed that Nityananda Prabhu was injured by Jagai and Madhai, He immediately went to the spot, angry like fire, wanting to kill them. Thus Lord Caitanya has explained His verse by the example of His own behavior. One should tolerate insults against oneself, but when there is blasphemy committed against superiors such as other Vaisnavas, one should be neither humble nor meek: one must take proper steps to counteract such blasphemy. This is the duty of a servant of a guru and Vaisnavas. Anyone who understands the principle of eternal servitude to the guru and Vaisnavas will appreciate the action of Sri Jiva Gosvami in connection with the so-called scholar’s victory over his gurus, Srila Rupa and Srila Sanatana Gosvami.

Another story fabricated to defame Srila Jiva Gosvami states that when Srila Krsnadasa Kaviraja Gosvami showed him the newly-completed manuscript of Sri Caitanya-caritamrta, Jiva Gosvami thought it would hamper his reputation as a big scholar and therefore threw it into a well. Srila Krsnadasa Kaviraja Gosvami was greatly shocked, according to this story, and he died immediately. Fortunately a copy of the manuscript of Sri Caitanya-caritamrta had been kept by a person named Mukunda, and therefore later it was possible to publish the book. This story is another ignominious example of blasphemy against a guru and Vaisnava. Such a story should never be accepted as authoritative.

Egoism and Lethargy
Last Night The Grim Reaper Came For Me
Tagged under: Nectar