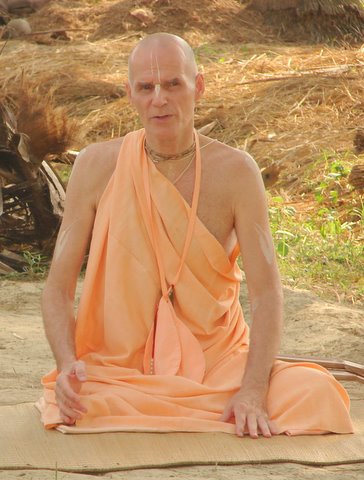 There used to be a television series in North America called MISSION IMPOSSIBLE. As kids we would watch it religiously and with rapt attention. The introduction in each series centered on describing to the would-be hero (should he choose to accept the impossible assignment) a series of endless complicated scenarios, all filled with what seemed like insurmountable obstacles. The drama would then begin to unfold with our hero performing superhuman feats and manoeuvres, crossing over overbearing hurdles and somehow battling through these intense and challenging situations which all appeared a truly lost cause, very much impossible to overcome… yet every single time, without fail and to everyone’s amazement (and that was our attraction to and the beauty of the series), what appeared initially as an impossible mission would end up becoming very much feasible.

In many ways, the present varnasrama mission is like this. To turn the tide from the present global disastrous scenario we find ourselves in is indeed a mission impossible, if taken at face value. The odds for the world leadership becoming responsible Vaisnavas and ruling their citizens based on principle of dharma seem incredibly remote. The chances for people reverting to a more simplified life style, of becoming localized and depending on production from the land, of abandoning the conveniences of tractors and similar modern machineries but using more traditional and natural technologies all appear like something from a fairy tale. The odds for governments closing down slaughter houses, liquor and brewery stores, lotteries and gambling casinos also seem totally unfathomable. The odds of stopping the ever increasing list of promiscuity and hedonistic behaviour in society appear too incredible. And the likelihood for people to again take up a God conscious way of life based on the four principles of truthfulness, compassion, austerity, and cleanliness also appears unreal. But we, the devotees of Krishna, know better… nothing is impossible.

We must maintain this great hope. The story of that little mother sparrow who had lost her eggs and threatened to ocean to drink her up should serve as a reminder. Seeing such determination on the part of that sparrow, Lord Vishnu’s huge bird carrier, Garuda, had come to the rescue. Where is Garuda now one may ask? We have yet to show the determination of that mother sparrow.

As often pointed out by Srila Prabhupada, planning and organization remain the two most important aspects, the key factors, for any organization or movement to succeed, besides of course the integrity and purity of its leaders. Planning remains the domain largely of the more intellectual class, the brahmanas, while organization remains largely the domain of the more administrative class, the ksatriyas. These two classes of men are needed to make things move. They are meant to go hand in hand.

At present we lack especially in ksatriya trained manpower. The varnasrama colleges, so much wanted by Srila Prabhupada, are meant to bring about the needed changes to give individuals an opportunity to take up these highly important posts. Simultaneously, we also need to cultivate present existing individuals holding such managerial positions in society although they may not yet be devotees. We need to work from both sides so that our planning and organization becomes balanced and harmonized.

There are many positive signs taking place within ISKCON in this regards and it will help us keep a proper focus by knowing about these.

In February this year, the GBC passed two significant resolutions pointing towards acknowledging and supporting the varnasrama mission. These have already been widely published on various devotee sites. Some will surely say it is not enough and they certainly have a point. However, we should see it as something positive.

In April this year, the leadership of India, the India Regional Governing Body (IRGB), formulated a series of resolutions to establish a national ministry for Varnasrama-based Rural Development, thus recognizing its importance and necessity. Those efforts are gradually unfolding.

Later in the month August, the leadership in Malaysia held their National Council meeting where the establishment of a national varnasrama committee was on the agenda. Some encouraging news on this should be available by the next issue of this newsletter.

Looking on the Western side, the Canadian leadership have also slated varnasrama on their agenda for their up-coming national meetings in early October.

Last but not least, later on this year, in mid-November, the leadership of W. Africa plans its annual festival and varnasrama will also be discussed. There are many other developments taking place.

I was very happy to hear how some of our varnasrama preachers in India, in particular Sriman Bharat Chandra prabhu, National Coordinator for the varnasrama mission, are forging ahead to establish Varnasrama Supporting Teams (VRT). This is a simple yet most effective way to help bring the much needed awareness and thus begin the process of self-education and training as to what the varnasrama mission entails… and it entails a lot. We need to have these set up wherever we detect even a small interest in the varnasrama mission. We should actually have such units wherever there is an ISKCON center and especially in all large cities even there may not be a center yet.

There will soon be a brochure available which will make it easier for devotees to become involved in this way. Establishing VRT units in different countries will pave the way to consciousness building, thus underlining the urgency for bringing about the varnasrama changes so much needed. Every responsible devotee reading our varnasrama newsletter should make an effort to become somehow or other involved in establishing or participating in such units of VRT. It will be largely be within such gatherings of VRT members that deeper realizations of varnasrama will become revealed.

Another yet important level to develop is at the national levels. As the VRT units will provide opportunities to develop local and regional efforts promoting the varnasrama mission, the importance and urgency to establish national ministries for varnasrama will become more obvious. There will be a direct relationship with the establishment of VRT units and the creation of varnasrama ministries in different countries.

Devotees in leadership positions around the world can take advantage of the various pieces of information now available to help make this happen. Having such varnasrama ministries established will be like helping manifest the ksatriya aspect of the varnasrama mission. The more both these elements can work nicely together, the planning of the brahmanas and the administration of the ksatriyas, the more we can begin to effect changes within our own society and society at large.