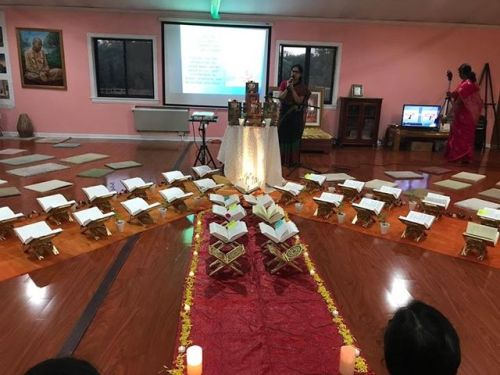 ISKCON Naperville distributed 57 sets of Srimad Bhagavatam on the auspicious occasion of Bhadra Purnima (Album of photos)
Srila Prabhupada: Srimad-Bhagavatam is the philosophy of devotional service and the scientific presentation of man’s relationship with the Supreme Personality of Godhead. Prior to the age of Kali there was no need for such a book of knowledge to know the Lord and His potential energies, but with the beginning of the age of Kali human society gradually became influenced by four sinful principles, namely illegitimate connection with women, intoxication, gambling and unnecessary killing of animals. Because of these basic sinful acts, man gradually became forgetful of his eternal relation with God. Therefore man became blind, so to speak, to his ultimate goal of life. The ultimate goal of life is not to pass a life of irresponsibility like the animals and indulge in a polished way in the four animal principles, namely eating, sleeping, fearing and mating. For such a blind human society in the darkness of ignorance, Srimad-Bhagavatam is the torchlight to see things in proper perspective. Therefore it was necessary to describe the science of God from the very beginning, or from the very birth of the phenomenal world. Srimad-Bhagavatam is so scientifically presented that any sincere student of this great science will be able to understand the science of God simply by reading it with attention or simply by regularly hearing it from the bona fide speaker. Everyone is hankering after happiness in life, but in this age the members of human society, blind as they are, do not have the proper vision that the Personality of Godhead is the reservoir of all happiness because He is the ultimate source of everything (janmady asya yatah [SB 1.1.1]). Happiness in complete perfection without hindrance can be achieved only by our devotional relationship with Him. And it is only by His association that we can get free of distressful material existence. Even those who are after the enjoyment of this material world can also take shelter of the great science of Srimad-Bhagavatam, and they will be successful at the end. -From Srila Prabhupada’s purport to SB 2.7.52
Find them here: http://bit.ly/2O3D9US