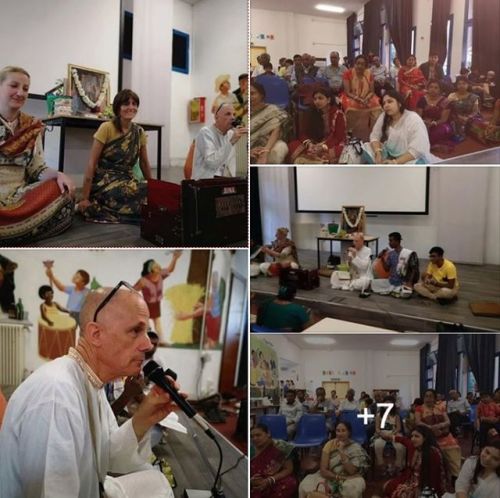 Preaching program in Bologna, Italy (Album of photos)
(from Srila Prabhupada-lilamrta) Mr. Agarwal doubted whether Westerners would be able to stay with Krsna consciousness for very long. “Now in the radiance of your company,” he said, “as long as you are here bodily and physically, they may continue to observe all these restrictions. But when your physical influence will not be there, one day when you will have to leave this world, then all these people that have come in contact with you, will they go bad?” “No,” Prabhupada said firmly. “Your claim is very tall,” replied Mr. Agarwal. “Can you tell me what is the basic foundation of your claim?” Prabhupada reminded him that all his disciples had been initiated into the chanting of the Hare Krsna mantra and that according to the Vedic scriptures the constant chanting of the Lord’s holy name will save even the most fallen souls and protect them from falling again. Even after his passing away, Prabhupada predicted, his disciples would not fall victim to maya, as long as they continued their prescribed chanting.
Find them here: http://bit.ly/301l8hb

A visit to the hospital where several devotees were brought after a car accident in Ukraine
24 Srimad Bhagavatam sets distributed by the Hare Krishna Pracara Kendram, Miyapur (Album of photos)
Tagged under: Nectar

42GB of a complete library of kirtans ready for free downloading