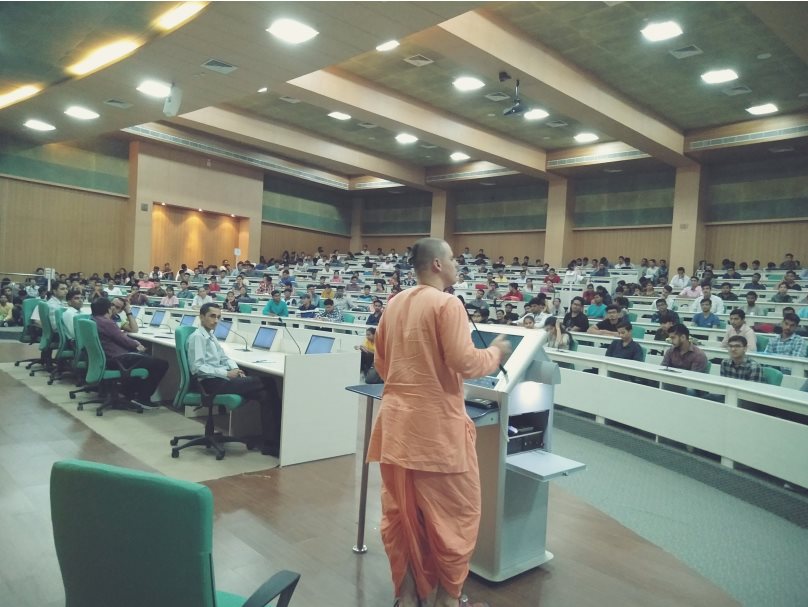 Presently, the young generation is disappointed from the increasing competitive life style, rapid technological advancement, and unending global problems. They are looking for change and hankering for stress free life style. They have accustomed to that, which is easy to use and gives instant result. This Krishna Consciousness is the best possible remedy for their problems. In this regard Srila Prabhupada says, “So our simple method—we go everywhere, all over the world, chant this Hare Kṛṣṇa mahā-mantra, and we attract people, especially younger generation, boys and girls” (Arrival lecture, Paris, July 20, 1972). However, the presentation of the message taught by Srila Prabhupada in his commentary famously known as “Bhagavad Gita as it is”, compatible to the youth at present time is a great challenge.

Now-a-days, social media and western life style overly influence the 21st century youngsters. It results in increasing number of cases of drug addiction, suicides, women extortion, and poor performance in their subject area. The helpless adolescents desire that, their problems should be address in a systematic and professional manner. The scientific approach of addressing the problem in the form of conferences and courses is very successful at present time. Srila Prabhupada had given many lectures in several universities and colleges all around the world and had told the young students about Krishna Consciousness. Srila Prabhupada says in a lecture, “Ladies and gentlemen, I thank you for your kindly receiving us. This Kṛṣṇa consciousness movement…, Kṛṣṇa consciousness movement is not a new thing. Five thousand years ago, when Lord Kṛṣṇa appeared on this planet, since then Kṛṣṇa consciousness is present, according to historical times” (lecture at San Diego University, 1972). Srila Prabhupada used to tell them about the message of Lord Krsna as given in Bhagavad Gita. Therefore, to continue the propagation of teachings given in the scriptures among the educated class as per Srila Prabhupada instructions, HH Subhag Swami Maharaja inspires his followers to present the teachings of Bhagavad Gita in schools and colleges.

A four day course titled, ‘Discover Yourself’ has been organized in Dronacharya College of Engineering, Himachal Pradesh. The program started with the lighting of lamps and prayers. Four hundred students from BBA, BCA and B.Ed. courses in the institute gathered in the seminar hall. The hall was packed and students were anxiously waiting for the speakers from different countries to deliver talks on ancient Vedic culture. The students were impressed to listen about the spiritual values and ethics from foreign speakers. They were happy to see that the topics covered in the course, addresses various problems faced by them. Total three hundred forty Bhagavad Gita were distributed and most of the students pledged to read Bhagavad Gita, at least one shloka daily. By the mercy of the Lord, students welcome the scientific approach of presenting the spiritual knowledge. Such a great event has been arranged by the blessings of Srila Prabhupada. The head of the departments decided that it is not necessary to conduct such program, as they have very busy schedule. Later, when the principal of the college conducted a meeting with student class representatives, and somehow or other they become interested, then the college administration agreed for conducting four days course.

The course was split into two batches, one for BBA/BCA students and second for B.Ed. students. The BBA/BCA students were generally adamant and least interested in Value based courses. However, after attending the course their heart changes, they find something useful in it. On the last day, in students’ feedback, astounding reviews about the course have been received. They understood many spiritual values, such as one of the student says, “I will try meditation and read Gita daily”. One of the special comment about the course came from a BBA student. On the first day, he was asked a question, ‘Do you believe that God can play some role in achieving your goal of life? He said, ‘Sorry, I am atheist’. In this connection, Srila Prabhupada says, “….I mean to say, where is that education in the university to prepare the student for the next life?” (Conversation with Mrs. Critchley, Aug 3, 1973, London). Now, youngsters in India have similar mind set as of westerners. However, at the end of the course, he said, ‘I promise that I will read Bhagavad Gita daily, at least one shloka.’ This is the mercy of Srila Prabhupada. Teachings given in Bhagavad Gita are so powerful that any person in any state can easily understand the message given by Supreme Personality of Godhead, Lord Shri Krsna.

The first seminar was given by Dr. Ankit Sharma, Ph.D. (IIT Varanasi) defining the reality of success from the concept given in Bhagavad Gita. Next, HG Krishna Sudama Prabhu gave two seminars defining happiness and importance of values in a students’ life giving various scriptural references. On the last day, a seminar on importance of Shrimad Bhagavad Gita has been presented to emphasize the values given it. In addition, the college authorities were especially appreciating the seminar on Bhagavad Gita. They were satisfied by the knowledge provided during the course. The director of the institute, Mr. B. Pathania was very much favorable for the holistic development of their students. On the last day, Mr. Pathania reviewed and asked many questions to students, regarding what they had understood from the course. Students and teachers appreciated the scientific approach to present the moral and ethical teachings given in Bhagavad Gita. Every day mahaprasadam was distributed to students and staff of the college. They highly appreciated the tasty meal provided every day.

After the completing the four-day course in Himachal Pradesh, another program at a corporate firm, Web Out Sourcing Pvt. Ltd, Chandigarh has been organized. Devotees approached the owner and he agreed for an interaction. There, HG Krishna Sudama Prabhu from Armenia gave a lecture on Bhagavad Gita to the young professionals at the office. He describes key to happiness from shloka 66 of chapter 2. It seems that they had heard of Bhagavad Gita for first time and especially from a foreign saint. The professional life is full of frustration and anxiety. They were particularly amazed to see foreign saintly persons speaking about Vedic scriptures. Srila Prabhupada says, ‘It should be understood that a person who does not have Vedic knowledge always acts in ignorance of what he has done in the past, what he is doing at the present and how he will suffer in the future. He is completely in darkness. Therefore the Vedic injunction is, tamasi mā: “Don’t remain in darkness.” Jyotir gama: “Try to go to the light.” The light or illumination is Vedic knowledge, which one can understand when he is elevated to the mode of goodness or when he transcends the mode of goodness by engaging in devotional service to the spiritual master and the Supreme Lord.’ (Purport, SB 6.1.49)

After that, Dr. Ankit Sharma, gave lecture, about the effect of reading Gita in his own life and how other prominent persons of the society have acknowledge this great scripture. He said, ‘Mahatma Gandhi, Albert Einstein and many other distinguish personalities of the world have accepted the teachings from this great literature’. After the lecture, we tried for books distribution and HG Nilachal Prabhu took the command and convince them that, to experience higher taste in their life, take Gita. In the crowd of twenty-five, fifteen persons took Bhagavad Gita. The owner of the company was impressed by the appearance and talks delivered by devotees and requested them for a bigger program on spiritual culture and knowledge.

Moving forward to our next destination, Guru Jambeshwar University of Science and Technology, Hisar, invited us to give the value education seminars to their newly admitted students. Now, Government of India is focusing on the character building of the graduates. It was found that although the graduates have high technical qualification which makes them best working force in the world but due to lack of basic values, they lack mental peace and good character. They are becoming more and more restless and arrogant. They are always searching for happiness and peace in the material things but never reached to the permanent solution. Therefore, it is very important to spread the message of Bhagavad Gita among the educated class of the society through seminars and courses. We approach the authorities to provide us opportunity to give lectures at the Induction program, in which culture, moral values, and ethics need to be taught. After several meetings and discussions, they finally agreed to give four days in the program.

Our team was ready and few more speakers came to join for the four days discourse. It is an official program under guidance of government authorities, which comes with technical adjustments and modification. First day, around 400 students assembled in a magnificent seminar hall. It was an entirely new experience for our team and for the students as they have their first day in the college. By the mercy of the Lord, seminar started with a lecture by Dr. Ankit, and HG Sudama Prabhu delivered second lecture. Students were inquisitive and asked many questions related to carrier, life, social problems etc. HG Nilachal Prabhu came from Chandigarh, delivered a nice interactive seminar on mind control. It is a famous topic among young minds. Lots of discussion and interaction with student rejuvenate their spirit of culture and values that also satisfied the organizers and developed faith on us. The concerning authority of the university Dr. Vishal Gulati was very happy and appreciated the wide varieties of speakers and talks given.

Dr. Shivendra Pathak (HG Satyaraj Prabhu), a veterinary surgeon from Jhansi gave interactive seminar on stress management. Last seminar in the series was on Bhagavad Gita and in the end; most of the students were motivated for reading it. Fifty Bhagavad Gita were distributed which was beyond our expectation as in govt. institutions people from different religious background were present. Many of them were interested to know more about spiritual subject. From such seminar series, the interest of youth in spiritual topics and Vedic culture has increased. They are ready to accept the spiritual solution for their problems, as they found it easy and simple. That is the way of 21st century generation. After getting the great response from youngsters, our enthusiasm has increased. It is also a great method of distributing books to the future of the society.

Once, a reporter asks Srila Prabhupada, ‘why there are so many young people, why so many young are attracted?’ Srila Prabhupada says, ‘Young, they are receptive… they are trying to find out something where they will find happiness… here they are finding the real substance.’ (Interview with Kerr, Toronto, June 18, 1976). Therefore, the teachings given in Bhagavad Gita as it is are so profound that people from various background are acknowledging it. Hence, under the inspirations and blessings of Srila Prabhupada, the journey of spreading the message of the Lord will continue forever.

We offer our humble prayers unto His Holiness Subhag Swami Maharaja for his blessings and personal guidance and for inspiring all the devotees to do programs more enthusiastically. We would like to thank all the devotees who came from different places to make the programs successful.